US Navy carrier arrives in Philippines, more help on the way 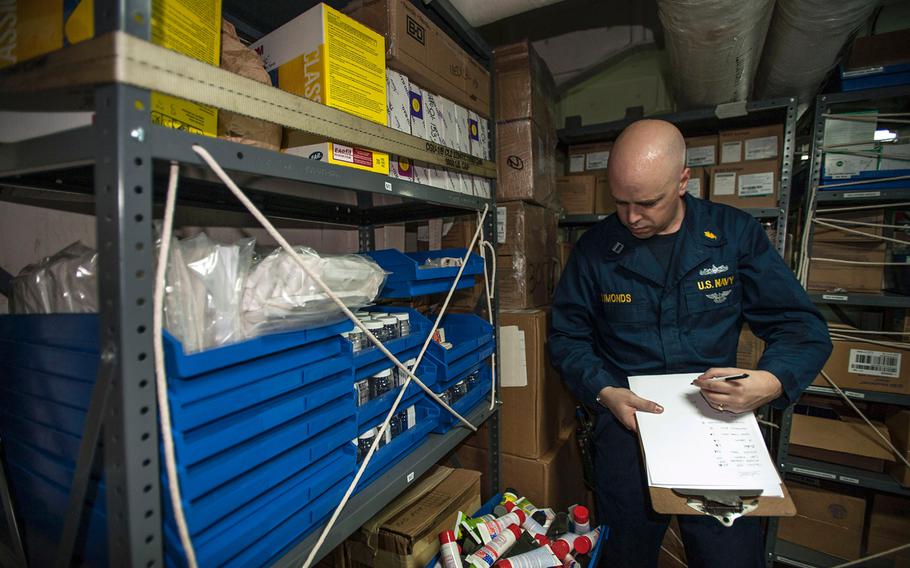 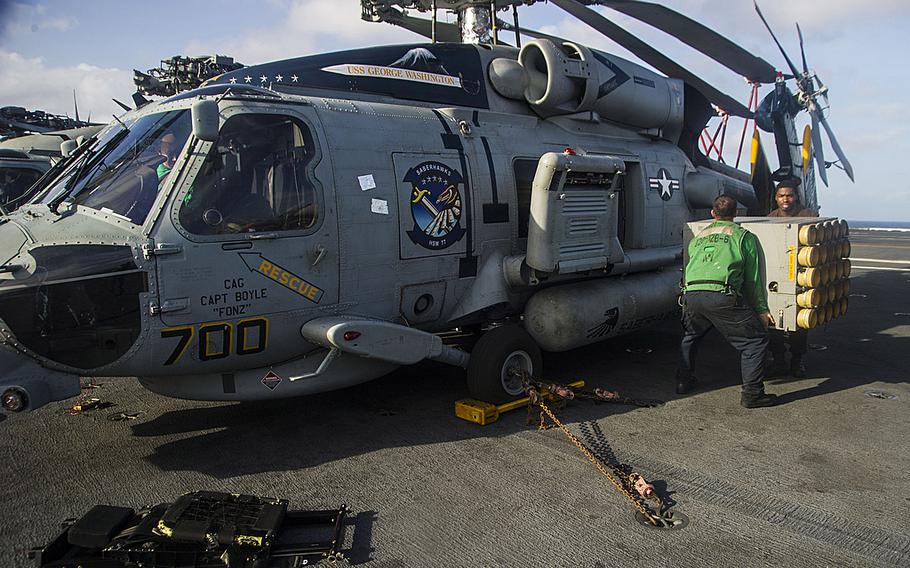 Sailors assigned to the Saberhawks of Helicopter Maritime Strike Squadron remove equipment from an MH-60R Seahawk helicopter aboard the USS George Washington as the carrier was en route to the Republic of the Philippines on Nov. 13, 2013, to support humanitarian efforts in response to Typhoon Haiyan. (Paolo Bayas/U.S. Navy) 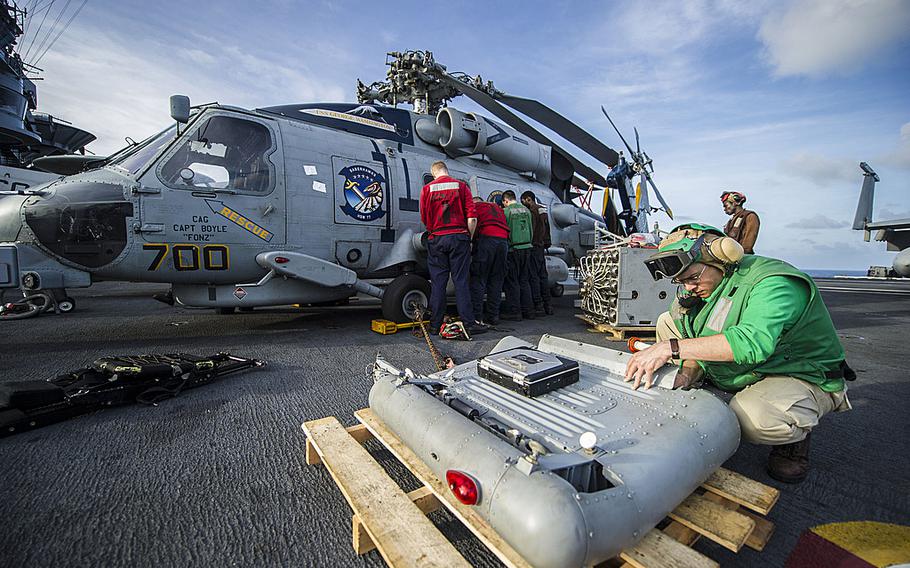 Sailors assigned to the Saberhawks of Helicopter Maritime Strike Squadron remove equipment from an MH-60R Seahawk helicopter aboard the USS George Washington as the carrier was en route to the Philippines on Nov. 13, 2013, to support humanitarian efforts in response to Typhoon Haiyan. (Paolo Bayas/U.S. Navy) 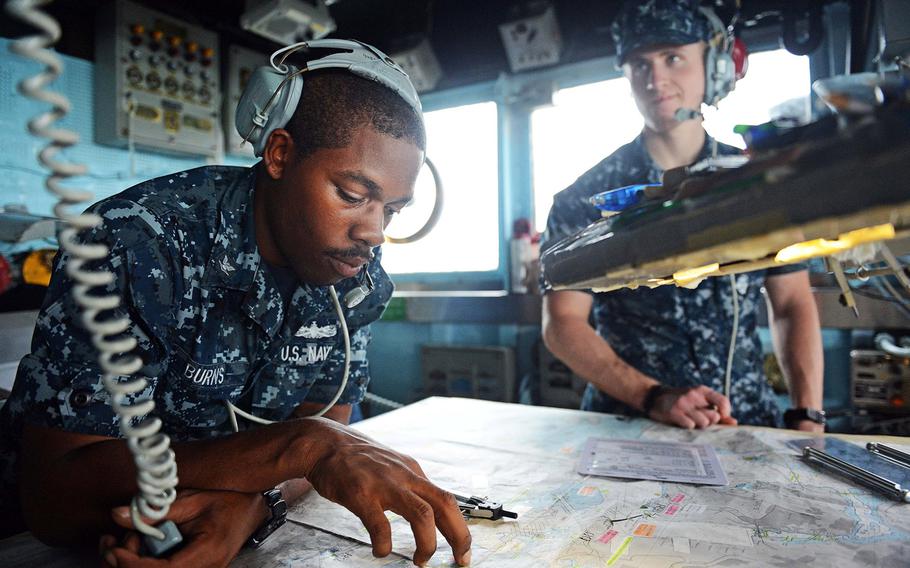 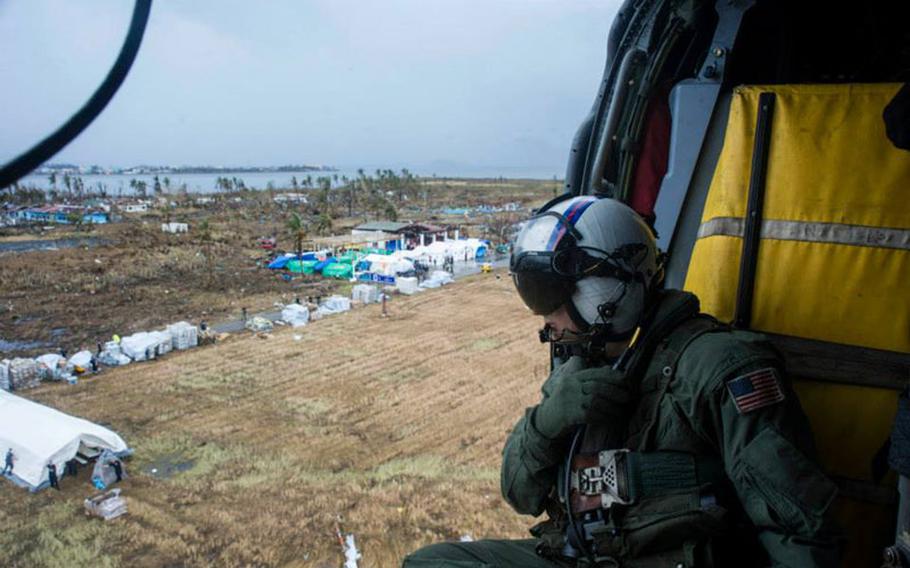 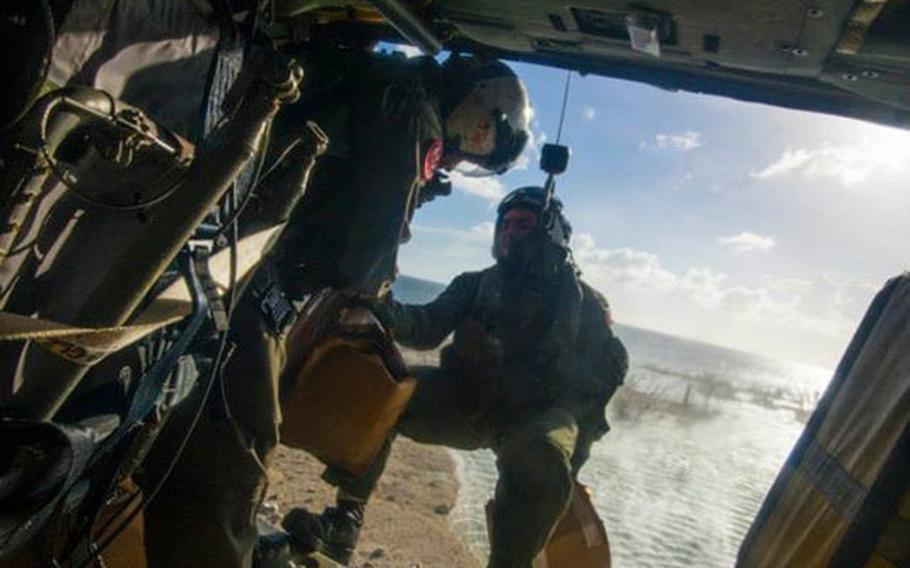 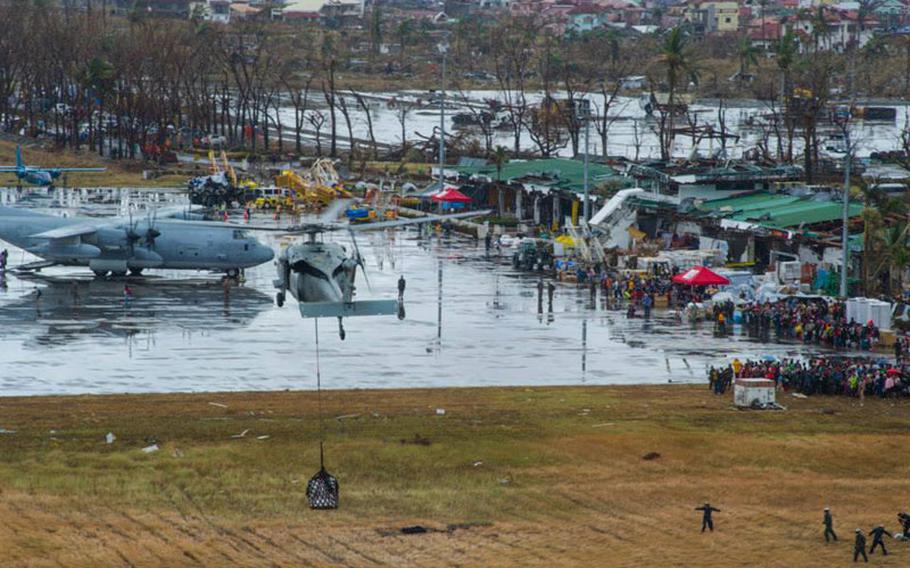 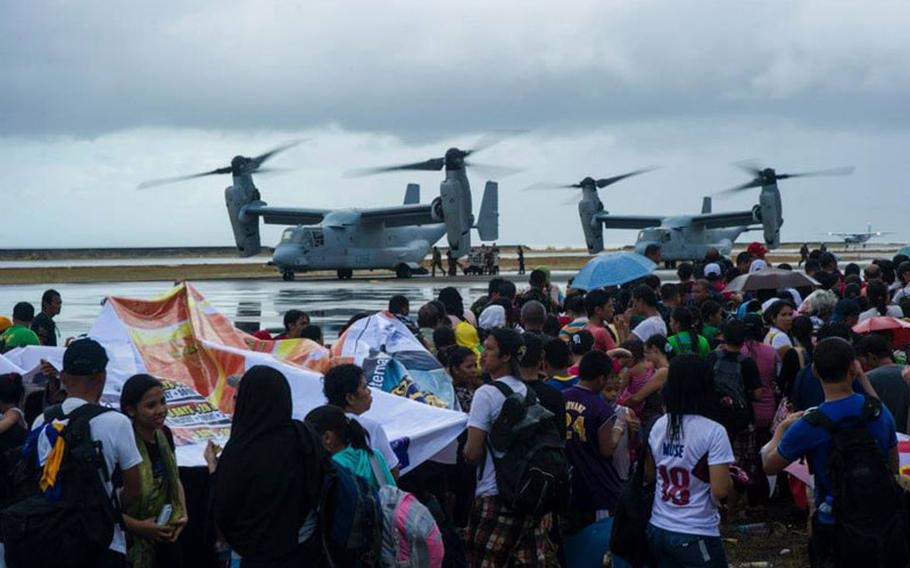 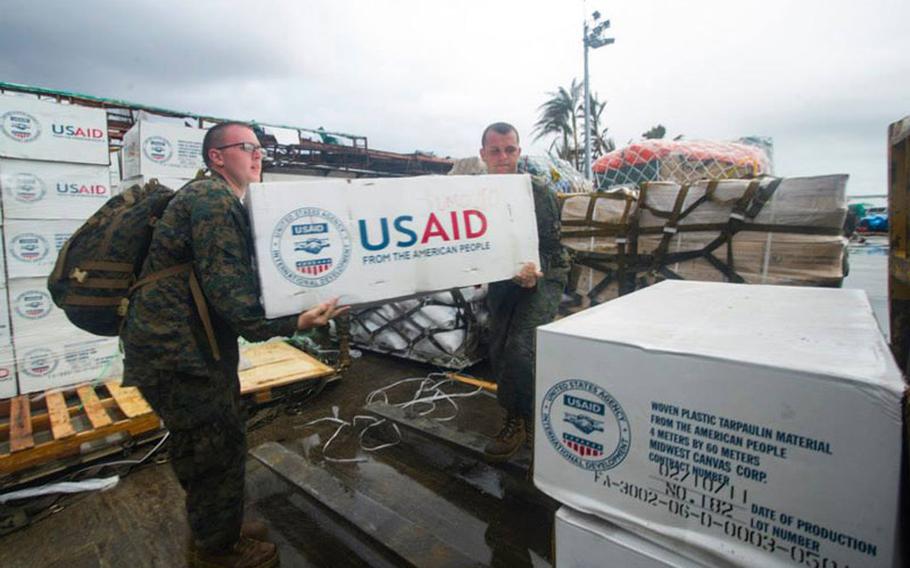 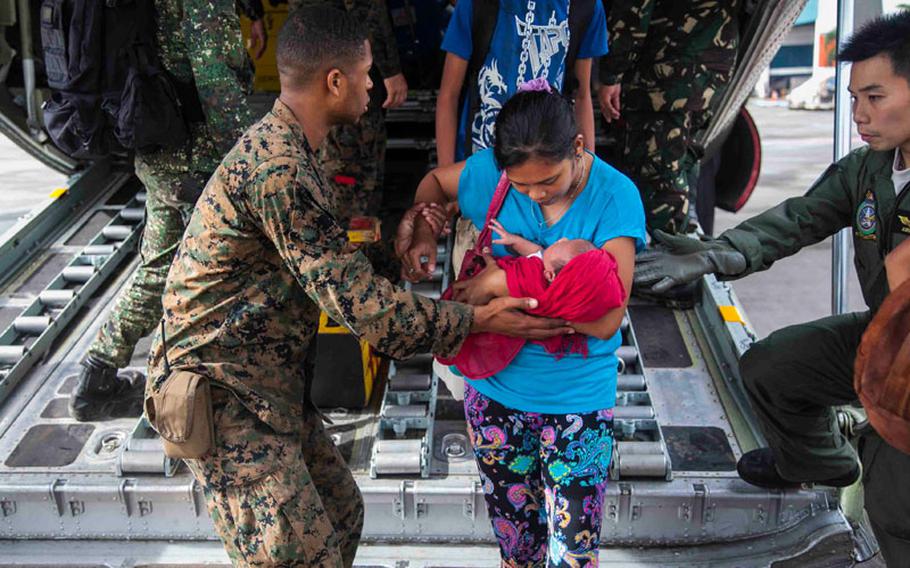 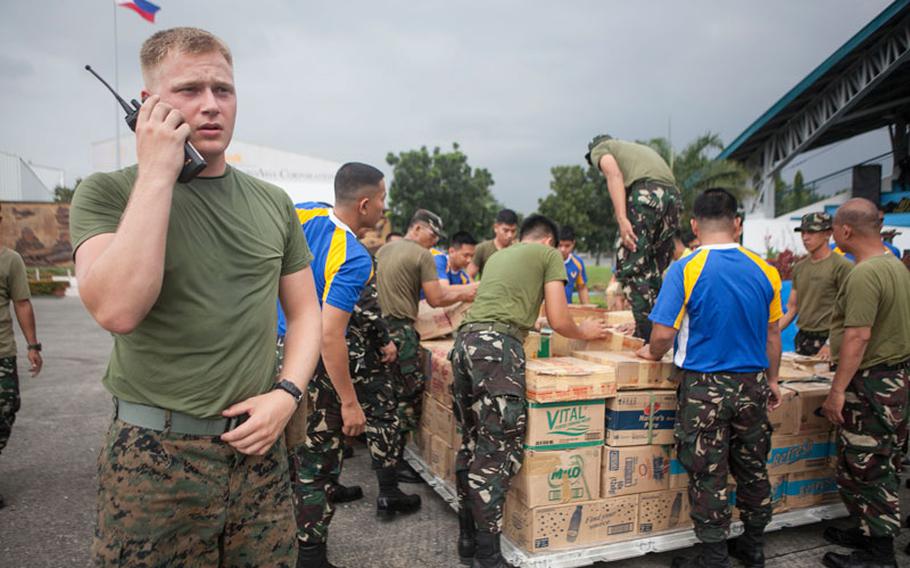 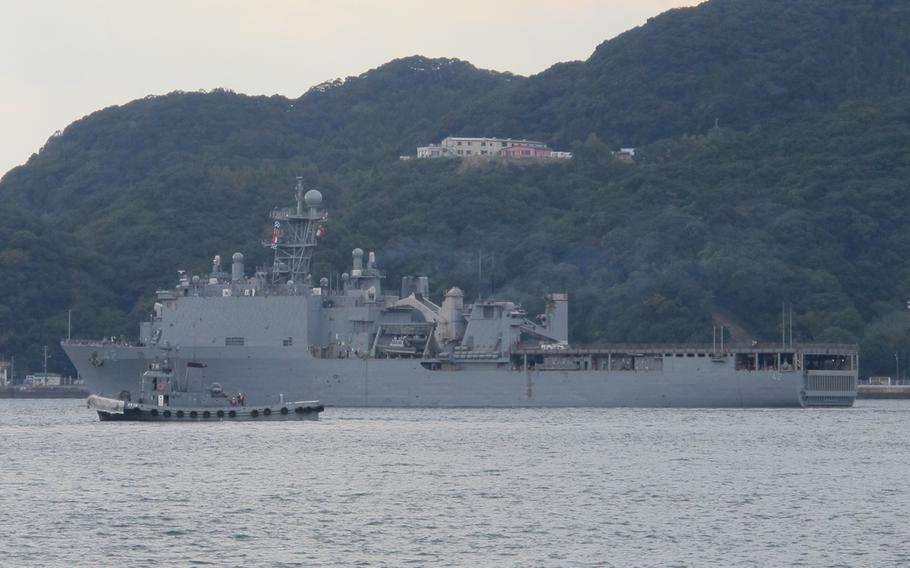 The USS Germantown departs Sasebo Naval Base in Japan on Nov. 14, 2103, for Okinawa to take on Marines and equipment before heading to the Philippines to assist in relief efforts. The Germantown and the USS Ashland are scheduled to arrive in the Philippines sometime next week. The Ashland left Sasebo on Thursday morning. () 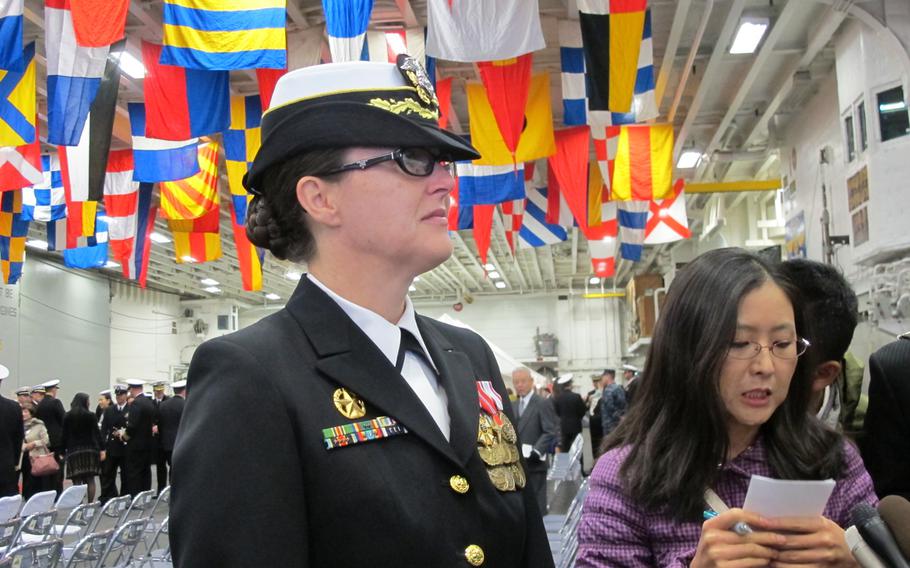 Navy Capt. Heidi Agle addressed the media shortly after taking command of Amphibious Squadron 11 Thursday morning aboard the USS Bonhomme Richard at Sasebo Naval Base. Agle wasn't able to celebrate long as she was forced to rush from the ceremony to the USS Germantown and her ride to the Philippines to assist in relief efforts there. Three of the squadron's four ships are foregoing scheduled maintenance to aid efforts in the Philippines. The USS Germantown and USS Ashland departed Sasebo on Nov. 24, 2013. The USS Denver will depart sometime next week. The Bonhomme Richard is too far into routine maintenance to head out to sea, Agle said. ()

SASEBO NAVAL BASE, Japan — The George Washington carrier strike group arrived in the vicinity of the Leyte Gulf on Thursday, signaling the start of full-scale typhoon relief operations in the Philippines by the U.S. military, Navy officials said.

The focus was on assessing and filling immediate needs, which included drinking water, medical supplies and road-clearing equipment for the country’s devastated midsection. Typhoon Haiyan, one of the most powerful storms ever to make landfall, killed thousands and leveled a number of island communities with a massive surge of seawater on Nov. 8.

Hundreds of U.S. Marines from the 3rd Marine Expeditionary Brigade and various other American servicemembers are already on the ground, loading aircraft to haul food, blankets and medical supplies to the affected region and ferrying people in and out. Troop levels could swell to upwards of 1,000 by the end of the week, Obama administration officials have said.

“We’ve completed our high-speed transit and linked up with our U.S. Navy logistical assets from Commander, Task Force 73, which brings 7th Fleet naval forces to participate in Operation Damayan, “ strike group commander Rear Adm. Mark Montgomery said. “Specifically, the aircraft carrier USS George Washington and the cruisers USS Antietam and USS Cowpens will go to a position just off the eastern coast of Samar island in order to begin to assess the damage and provide logistical and emergency support to include medical and water supplies.”

It was a busy day for Navy forces rushing to aid an ally. Officials said the strike group’s Carrier Air Wing Five flew a number of fixed-wing aircraft Thursday morning to Naval Air Facility Atsugi to make more room on the flight deck for helicopter operations. The Lewis and Clark-class dry cargo ship USNS Charles Drew transported three pallets of food and eight with about 2,000 gallons of water each ashore to Tacloban, one of the worst-hit areas. The Charles Drew moved several pallets of water to Guiuan.

“We have ships conducting a variety of missions,” Montgomery said. “The USNS Bowditch is surveying water conditions in the Leyte Gulf. USNS Charles Drew and USS Lassen have helicopters that are bringing emergency supplies into Tacloban. The George Washington, Cowpens and Antietam are off the east coast of Samar. A third area of focus is Ormoc, where we’re sending USS Mustin right now.”

The Navy also pledged additional assets Thursday. The amphibious transport dock USS Denver will depart from Sasebo Naval Base in southern Japan next week to join the USS Germantown, the USS Ashland and their associated landing craft, which left the base Thursday.

The Germantown and Ashland were expected to arrive in the Tacloban area by the middle of next week after stopping in Okinawa to pick up Marines and road-clearing and water-filtration equipment, Navy officials said. They will establish airfields at remote sites where helicopters can land, and refuel MV-22 Ospreys and other choppers.

“It’s a team effort,” Amphibious Squadron 11 commander Capt. Heidi Agle said before leaving on the Germantown. “We stand ready to answer the call and will stay as long as the Philippines needs us.”

The USS McCampbell, USNS Richard E. Byrd, additional MV-22 Ospreys, P-3 surveillance aircraft and supplies were also scheduled to arrive Thursday or were en route, Navy and Marine Corps officials said. The Navy activated the hospital ship USNS Mercy on Wednesday. It could deploy in the next few days if called upon but would not arrive until next month.