US, NATO to review force posture after Russian jet incursion in Turkey 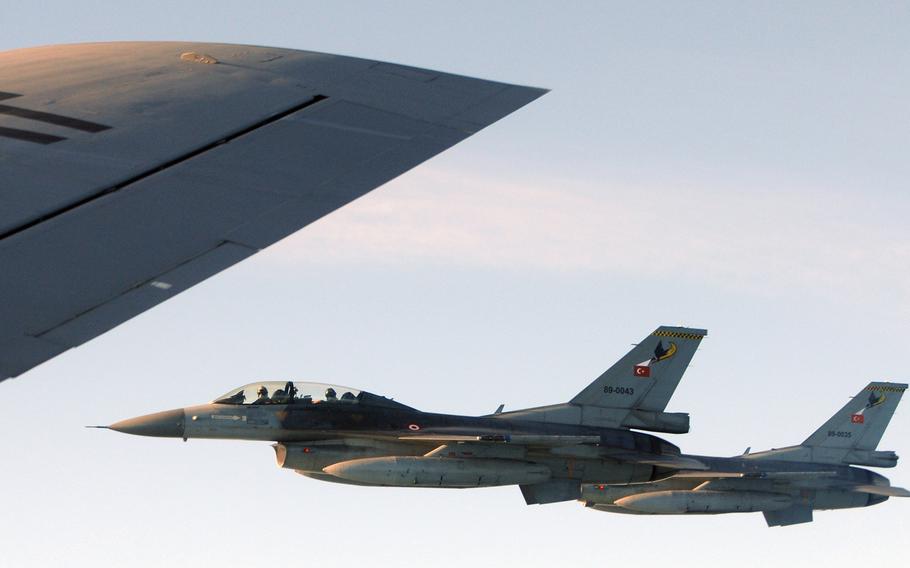 Two Turkish Air Force F-16 Fighting Falcons fly alongside a 351st Air Refueling Squadron KC-135 Stratotanker over the North Sea during a refueling mission in support of Exercise Bold Avenger Sept. 23, 2009. Turkey on Monday scrambled two F-16s in response to what Turkey said was a violation of its airspace when a Russian fighter briefly crossed over the Syrian border. (Thomas Trower/U.S. Air Force)

Turkey on Monday accused Moscow of violating its airspace when a Russian fighter briefly crossed over the Syrian border, prompting Turkey to scramble two F-16s and NATO to hold emergency talks on possible courses of action.

Russia has begun conducting regular airstrikes in northern Syria against militants opposed to the regime of President Bashar Assad.

U.S. Defense Secretary Ash Carter, during a stop in Spain on Monday, called on Russia to abide by air traffic norms and respect NATO air space amid signs Moscow is ramping up its bombing campaign.

“In the meantime, we call on Russia to act in a safe and professional manner, uphold international standards for safety, and respect the sovereignty of all nations, most recently our NATO ally, Turkey,” Carter said.

At a news conference at the Spanish Defense Ministry, Carter said U.S. officials “are conferring with” their Turkish counterparts about Saturday’s airspace violation, adding he expects the violation and its ramifications to be a focus at the NATO ministerial being held in Brussels on Thursday.

A senior U.S. defense official said on background that the U.S. has been in urgent consultations since Sunday with Turkish counterparts and NATO on courses of action, including what if any changes the U.S. needs to make to its defense posture.

If such an airspace violation occurs again, “the Russian Federation will be responsible for any undesired incident that may occur,” the Turkish Foreign Ministry said in a statement.

Turkish Prime Minister Ahmet Davutoglu, during an interview with Turkish television, elaborated on the warning.

“The Turkish armed forces have their orders,” said Davutoglu, as quoted by The Associated Press. “The necessary will be done even if it’s a bird that violates Turkey’s border ... Our rules of engagement are clear.”

Russian media outlets reported on Monday that Moscow acknowledged an airspace violation had occurred by mistake in Turkey and that a formal explanation was offered to the Turkish government in Ankara.

“Allies strongly protest these violations of Turkish sovereign airspace, and condemn these incursions into and violations of NATO airspace. Allies also note the extreme danger of such irresponsible behavior,” the North Atlantic Council stated in a release. “They call on the Russian Federation to cease and desist, and immediately explain these violations.”

Turkey in the past has used concerns over its airspace as a reason to request alliance support.

In 2012, NATO approved a plan to send Patriot missiles to southern Turkey as part of an effort to protect Turkey from possible Assad regime missile strikes. The move came after Syrian air defenses downed a Turkish F-4 Phantom fighter-bomber that had strayed into Syrian airspace.

The Patriots were never used in combat, and after nearly three years in the Turkish city of Gaziantep, the U.S. announced in July that it would end its Patriot mission in Turkey later this month.

In a crisis, however, the U.S. is capable of returning Patriots to Turkey within a week, U.S. officials have said.

“I call on Russia to fully respect NATO airspace and to avoid escalating tensions with the alliance,” Stoltenberg said in a statement. “I urge Russia to take the necessary steps to align its efforts with those of the international community in the fight against” Islamic State militants.

Spain continues to provide a Patriot missile battery in the Turkish city of Adana.

Spanish Defense Minister Pedro Morenes described the airspace incursion as “an incident that will hopefully never happen again,” but he emphasized that Spain’s Patriot battery was there to defend against any Syrian missile launches, not against other potential threats.

The incident occurred on Saturday, south of the Turkish border province of Hatay, which in recent years has also been a regular transit route into Syria for Islamic militants fighting across Syria and Iraq.

Turkey said the Russian aircraft exited Turkish airspace, returning to Syria after it was intercepted by two F-16s from the Turkish Air Force, which were conducting patrols in the region.

For the U.S. and Turkey, Russia’s intervention in Syria has been a source of great friction. While Moscow says it aims to destroy the Islamic State group, which is a threat to the regime of Russian ally Assad, the West says Russian airstrikes are instead focused on U.S.-supported anti-Assad rebel fighters.

Last week, Russian aircraft began strikes near the city of Homs, about 100 miles to the southeast of Russia’s new air base at Latakia. The area around Homs is not controlled by the Islamic State but by rebels associated with the western-backed Free Syrian Army.

“These very sophisticated air defense capabilities are not about [the Islamic State], they’re about something else,” he said during an appearance last week at the George Marshall Fund in Washington.