US, NATO security interests at stake in Brexit vote 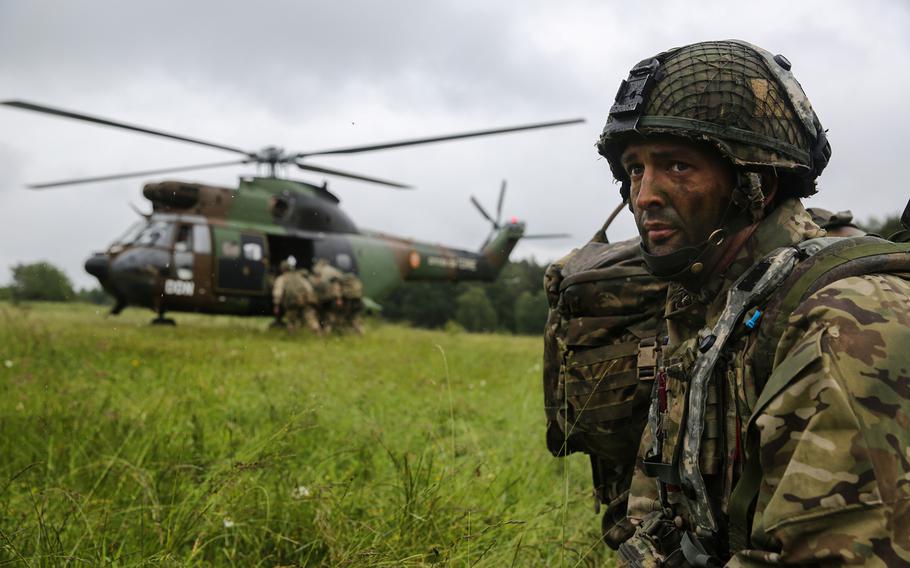 British army Pvt. Luke Benneti of the Parachute Regiment participates in the Swift Response 16 training exercise at the Hohenfels Training Area in Germany, on Friday, June 17, 2016. Analysts warn that a British vote to leave the EU also carries a series of potentially damaging security implications for the U.S. and its allies. (Seth Plagenza/U.S. Army)

British army Pvt. Luke Benneti of the Parachute Regiment participates in the Swift Response 16 training exercise at the Hohenfels Training Area in Germany, on Friday, June 17, 2016. Analysts warn that a British vote to leave the EU also carries a series of potentially damaging security implications for the U.S. and its allies. (Seth Plagenza/U.S. Army) 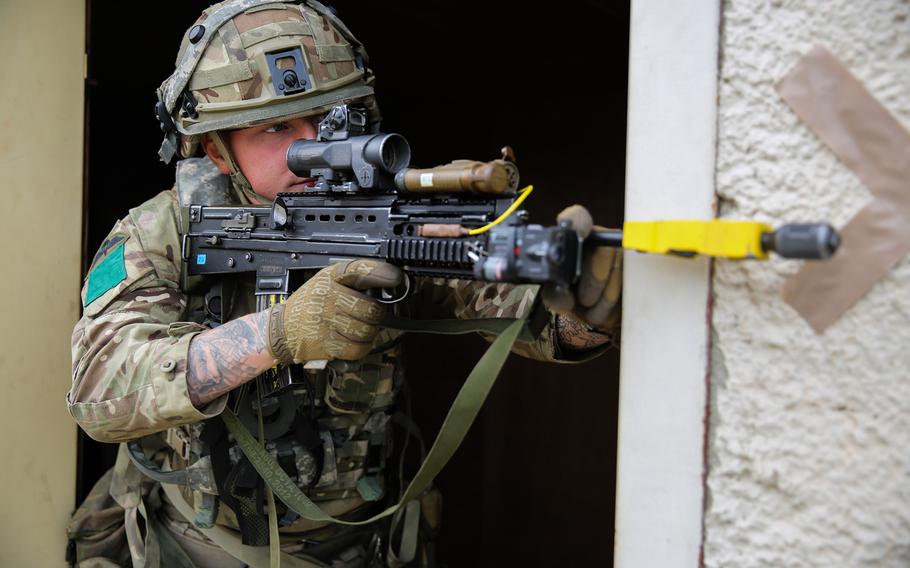 British army Pvt. Jack Wheeler of the Parachute Regiment takes part in the Swift Response 16 training exercise at Hohenfels Training Area in Germany on Friday June 19, 2016. Analysts warn that a British vote to leave the EU also carries a series of potentially damaging security implications for the U.S. and its allies. (Seth Plagenza/U.S. Army)

Britain’s referendum Thursday on whether to leave the European Union could potentially have damaging security implications for the United States and its allies if a majority votes to leave, analysts warn.

The departure of Britain from the EU could further fray European unity, already tested over the past few years by the debt crisis in Greece and the current influx of migrants and refugees. That could have a ripple effect on the U.S.-led NATO alliance, dealing a blow to two institutions that serve as a collective counterweight to adversary Russia, experts say.

“It is significant to note that (Russian President Vladimir) Putin has made no secret of his preference for the U.K. to leave the EU — a position unlikely to be driven by deep sympathy with British concerns about immigration,” said Walter B. Slocombe in an Atlantic Council report analyzing the pending referendum in Britain. “Rather, Putin surely expects that the strains among European states and within NATO and the EU would open opportunities for Russian exploitation.”

From President Barack Obama to Defense Secretary Ash Carter and American military commanders in Europe, there is strong support for Britain to remain in the EU, with the underlying rationale that a British voice in the bloc ensures unity and better coordination with the U.S. and NATO.

For example, within the EU Britain has been a major supporter of continued sanctions against Russia in response to Moscow’s intervention in Ukraine, even as some allies have at times wavered on the idea. Washington has long viewed those sanctions as economic leverage that helps curtail Russian ambitions.

“Here at NATO, we know the strategic value that unity and cohesion brings to our alliance,” Carter said during a news conference last week in Brussels. “It’s part of what makes the whole greater than the sum of the parts. The same is true for the EU. For the greater unity and cohesion each organization has, the better they’re able to work together.”

The referendum doesn’t affect Britain's membership or role in NATO in any direct way. And even if voters opt for withdrawal from the EU, Britain could still continue to take part in EU military operations — such as the organization’s naval anti-piracy mission off the Horn of Africa — as other non-EU member states have done in the past.

In terms of sheer military muscle, Britain — traditionally a staunch backer of U.S. foreign policy — also is a key contributor inside the EU, representing more than 20 percent of all defense expenditures while having only 14 percent of the bloc’s gross domestic product, according to the Atlantic Council. While the referendum vote has no effect on Britain’s standing in NATO, losing a British voice inside the EU could hinder collaboration between the two bureaucracies and lessen U.S. influence over the European grouping, analysts say.

“An EU without the U.K. would, in all likelihood, be less inclined to make its security and diplomatic efforts line up with U.S. priorities — and less able to mount effective operations,” Slocombe wrote.

While Germany is the EU’s undisputed economic force and leader in areas such as Europe’s migration crisis and economic policy, Berlin has historically been reluctant to take on such a prominent role in the area of military engagement.

Another source of concern is uncertainty about the economic effect of a British departure. While the long-term financial implications are fiercely debated in Britain, there is a general consensus that in the short term the British economy would take a hit. That, in turn, could challenge the country when it comes to defense spending. Britain, along with the United States, has long been a leader inside NATO when it comes to meeting alliance spending benchmarks that call for 2 percent of national gross domestic product to be dedicated to military matters.

Meanwhile, anxieties over a possible British departure are reflected in the area of Europe where concern over Russia is most pronounced, underscoring worries that a Europe that’s less unified somehow strengthens Moscow’s hand.

“Poland and the Baltic states also see Britain as a critical partner on the issue of Russia, since London has fought for a tough European stance against Moscow in response to its annexation of Crimea,” Stratfor, a U.S.-based security analysis firm, said in a report. “In the event that Britain leaves the continental bloc, its central and eastern European allies may eventually become more isolated from Brussels.”