US, NATO must continue to work together, Breedlove says 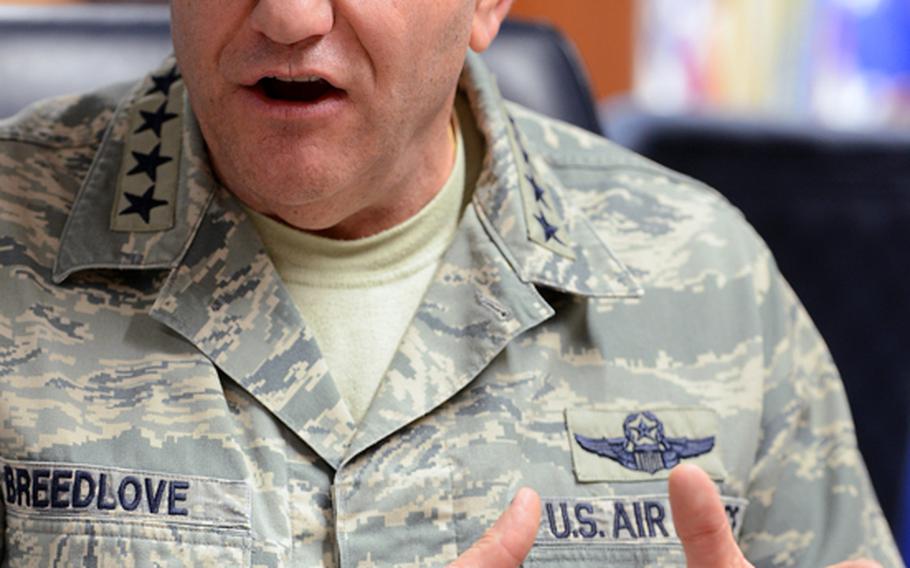 Air Force Gen. Philip Breedlove told a Senate panel considering his nomination to lead U.S. and NATO forces in Europe that he’s committed to continue building on and maintaining critical gains in interoperability achieved with European allies over the past 12 years of war.

“We cannot rebalance or re-pivot towards Asia without Europe,” Breedlove told the Senate Armed Services Committee on Thursday.

One of the most positive gains to come out of the war of Afghanistan was that the NATO alliance and partner nations “are much more gelled in their ability to work interactively and mixed together,” Breedlove said.

As coalition forces transition out of Afghanistan, “we cannot allow what we gained to fall back,” he said, since those strides were “bought with precious time and effort of our people.”

Breedlove, who’s currently the commander of U.S. Air Forces in Europe and Air Forces Africa, vowed to “keep pressure on our ability to train together and keep this standard of excellence high so we can continue to remain interchangeable.”

NATO leaders, including Secretary-General Anders Fogh Rasmussen, have been urging the 28 member states to ensure that the experiences gained by their national contingents in working together with their allies in Afghanistan are not lost after the alliance’s forces return to their peacetime garrisons following the withdrawal of combat forces in 2014.

The Afghan army and police are scheduled to assume the lead role in the war as the allies continue their drawdown ahead of their withdrawal.

Breedlove said his first focus, if confirmed as NATO supreme allied commander and the head of U.S. European Command will be “getting the transition in Afghanistan right.”

He stressed the need to engage with the commanders there to “make sure we have the force sizing, the drawdown schedules, and what we leave behind in residual capability right.”

Breedlove also told the committee he believes the U.S. military could further reduce its footprint in Europe.

“I do believe we have more infrastructure that we can draw down in the Air Force,” he said, adding that some of his fellow component commanders in Europe, to include the Army, have said the same.

Several senators questioning Breedlove noted the challenges he would face as NATO and EUCOM chief given the current budget constraints, dwindling resources and the volatility of the region.

Sen. Jim Inhofe, R-Okla., raised the issue of piracy in West African waters and asked Breedlove how he would handle getting resources to Africa at such a distance as the European continent.

Breedlove said being able to have forces forward-deployed in the southern tier of USAFE, closer to Africa, such as Spain, Italy and others, was critical to enable such moves.

“We are … looking to see where there are lily pads inside of Africa that we can establish relationships with nations” in order to cut down response time, he said, referring to small bases in strategic locations on the continent, which could be used as jumping points by U.S. forces in case of need.

For U.S. troops and their families under his command, Breedlove said, if he’s confirmed, one of his priorities would be “schools, housing and access to medical care.”

“If we can keep the family, which is at a base, squared away,” then military personnel can focus on the mission, he said.