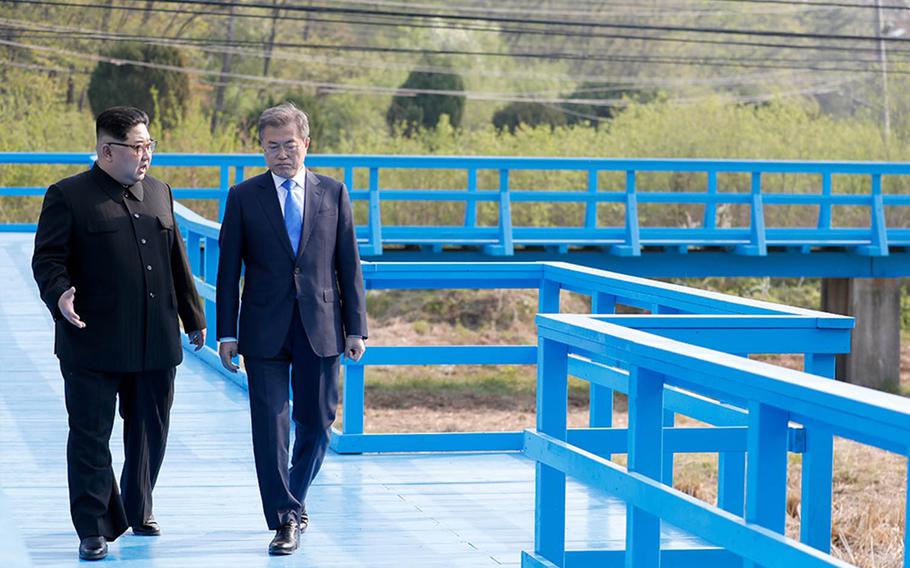 SEOUL, South Korea — The U.S.-North Korean nuclear stalemate has raised the stakes for a third summit between President Moon Jae-in and Kim Jong Un that is expected to be held next month, Moon’s office said Tuesday.

The comments came amid media reports that President Donald Trump canceled plans for his diplomat to travel to Pyongyang this week after Secretary of State Mike Pompeo received a belligerent letter from the North Koreans.

The South Korean president, who took office last year promising to improve relations with the North, has been thrust into the role of mediator as talks between the U.S. and North Korea have stalled over the nuclear issue.

The adversaries — who remain technically at war after the 1950-53 conflict on the divided peninsula ended in an armistice instead of a peace treaty — have not made it easy.

In the latest setback, Trump called off Pompeo’s trip to the North, tweeting that “I feel we are not making sufficient progress with respect to the denuclearization of the Korean Peninsula.”

He also accused China of pulling back its support for sanctions against the North because of its growing trade dispute with Washington.

China’s Foreign Ministry rejected the claim, saying it was “irresponsible” and not based on facts.

Pompeo had planned to travel to Pyongyang with his newly appointed special envoy, Stephen Biegun.

The newspaper said the contents of the letter were unclear, but CNN later reported that it contained a warning that denuclearization talks were “again at stake and may fall apart.”

CNN quoted three sources with direct knowledge of the development as saying Kim’s regime felt the process couldn’t move forward because the United States was not willing “to sign a peace treaty.”

Moon’s office said the deadlock only increased the need for another inter-Korean summit, which is due to be held in September, although an exact date has not been set.

The two sides also have not announced an agenda, but the cancellation of Pompeo’s visit raised the likelihood that efforts to get the U.S.-North Korean talks back on track would be a key topic.

“We expect the inter-Korean summit to play a role in breaking the deadlock and expanding the road,” presidential spokesman Kim Eui-kyeom told reporters on Tuesday, according to a transcript. “In that respect, we think President Moon Jae-in’s role will be greater.”

Moon also stepped in by holding a surprise meeting with Kim in late May after Trump canceled plans for an unprecedented U.S.-North Korean summit earlier this year. Trump reversed the decision after a flurry of diplomacy and met with Kim on June 12 in Singapore.

The leaders pledged to “totally denuclearize the Korean Peninsula” but included no specific commitments or timelines in the summit agreement, leading experts to predict the process would unravel.

Trump, who suspended joint war games with South Korea in a concession to the North, wants an inventory of the North’s arsenal and other moves toward dismantling its nuclear weapons program.

Pyongyang, which has suspended nuclear and missile tests along with other measures, is calling for a reciprocal process that includes the easing of economic sanctions and a formal end to the 1950-53 Korean War.

South Korea must balance its support for international sanctions and other U.S. pressure on the North with efforts to implement an agreement earlier this year to increase sports, cultural and economic exchanges with the North.

But a centerpiece of that effort — a joint liaison office in the North Korean border town of Kaesong that had been expected to be opened as early as this month — may be the first casualty of the latest tensions.

“We believe there is a need to once again review the issue, since a new development has emerged,” Kim Eui-kyeom said in separate remarks on Monday.

Reflecting the optimism stemming from the first landmark summit between Moon and Kim Jong Un in the truce village of Panmunjom on April 27, Seoul said Tuesday it has earmarked a 14.3 percent increase in funding for inter-Korean cooperation to about $990 million next year, according to the Yonhap News Agency.

Moon is eager to maintain calm on the peninsula after tensions rose sharply last year, raising fears of another war.

North Korea test-fired three intercontinental ballistic missiles and conducted its sixth and most powerful underground nuclear test. Trump responded with heightened rhetoric and threats to unleash “fire and fury” and to “totally destroy” the North if forced to defend the U.S. and its allies.