US, N. Korea appear headed toward a second summit, but to what end? 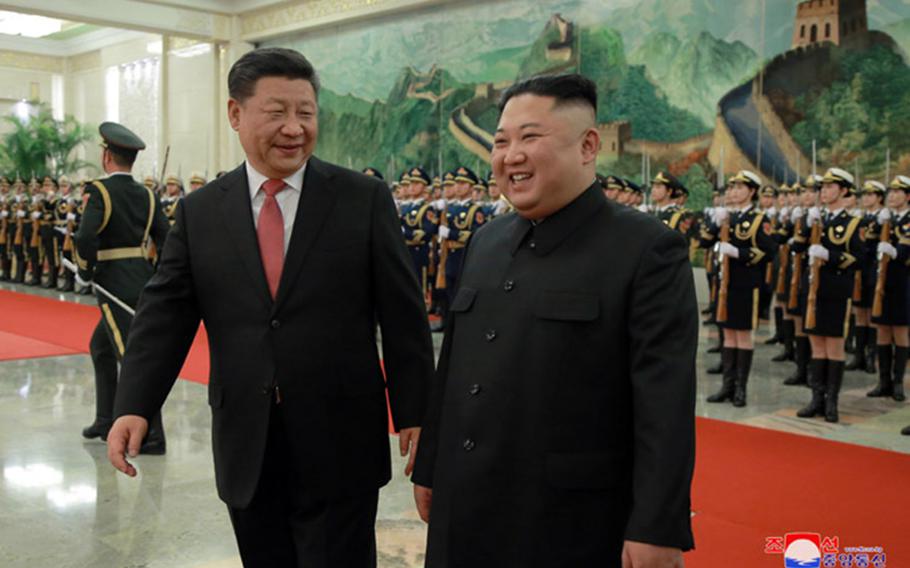 SEOUL, South Korea — The stars are aligning for a second U.S.-North Korean summit as Kim Jong Un vowed to try to achieve good results this time and renewed his commitment to the denuclearization of the divided peninsula.

The North Korean leader gave no details about how he will do so, according to the Chinese report of his remarks Thursday. But both sides will be under pressure to deliver a more specific outcome than the general pledges made in their first meeting on June 12 in Singapore.

Talks have since stalled over differences on key details including the North’s demands for a reciprocal approach that features rewards such as eased sanctions for steps already taken, including a moratorium on nuclear and long-range missile tests.

President Donald Trump’s administration, meanwhile, insists it will maintain its “maximum pressure” campaign that it believes forced the communist state to the table.

Kim told Chinese President Xi Jinping during his visit to Beijing this week that he will try during his next summit with Trump “to achieve results that will be welcomed by the international community,” according to the official Xinhua news agency.

North Korea “will continue sticking to the stance of denuclearization and resolving the Korean Peninsula issue through dialogue and consultation,” Kim was quoted as saying.

He also expressed hope “that relevant parties will attach importance to and positively respond to [North Korea’s] legitimate concerns, and jointly push for a comprehensive resolution of the Korean Peninsula issue.”

Xi called on Washington and Pyongyang to “meet each other halfway,” the report said.

Summit diplomacy All sides have signaled that another U.S.-North Korean summit is imminent, with State Department and North Korean officials reportedly meeting recently in Hanoi, Vietnam, to discuss the venue.

Kim’s fourth summit with Xi was widely seen as an effort by the North to coordinate strategy and get China’s support for lifting sanctions ahead of the meeting with Trump.

“I think Chairman Kim Jong Un’s visit to China is a sign that we are close to a second North Korea-U.S. summit,” South Korean President Moon Jae-in said Thursday during a press conference.

“I expect we may hear news of high-level negotiations between the North and the U.S. in the near future.”

The plans come as U.S. and North Korean officials have been unable to hammer out a deal at the lower levels, raising questions about whether the two leaders will be able to bridge the gap and make their next meeting more than a photo opportunity.

“Kim seems to only be interested in talking with the president, so the rough outlines of an agreement might need to happen at the top level,” said Alexandra Bell, senior policy director for the Washington, D.C.-based Center for Arms Control and Non-Proliferation.

“In a best-case scenario, both sides will agree to entering actual technical negotiations. That’s the only way to get a deal,” she added. “President Trump and Kim can agree on general parameters … but will need the assistance of technical experts to reach actual agreements.”

While Trump has insisted he’s in no hurry, North Korea has expressed mounting frustration over the lack of progress despite what it says are sincere efforts that include the purported destruction of its main nuclear testing site.

Sticking points Kim’s trip to China followed his annual New Year’s address in which he warned his country may need to find “a new way” forward if the situation doesn’t improve.

The main sticking point appears to be a fundamental difference over the definition of denuclearization.

Washington has offered economic incentives and security guarantees only if the North dismantles its nuclear weapons program. But Pyongyang wants a step-by-step approach and said in December it will not unilaterally give up its nuclear weapons until the United States removes what it called an American nuclear threat.

Moon, who has pushed to improve inter-Korean relations while brokering the nuclear talks, urged the North to take bolder disarmament measures and said Washington should reward them, an indication that he may support the eventual lifting of sanctions.

Secretary of State Mike Pompeo, who has yet to reschedule a high-stakes meeting with his North Korean counterpart that was canceled in November, has acknowledged it would take more than one summit to reach a solution.

“Lots of work … is left to be done, but I’m confident that in the next short period of time President Trump and Chairman Kim will get the chance to meet again,” Pompeo said Friday in an interview with Sean Hannity on Fox News.

“I’d be surprised if we get all the way home in this meeting, although it would be fantastic if we did,” he added. “But suffice it to say I think we have set the conditions where we can make real progress.”