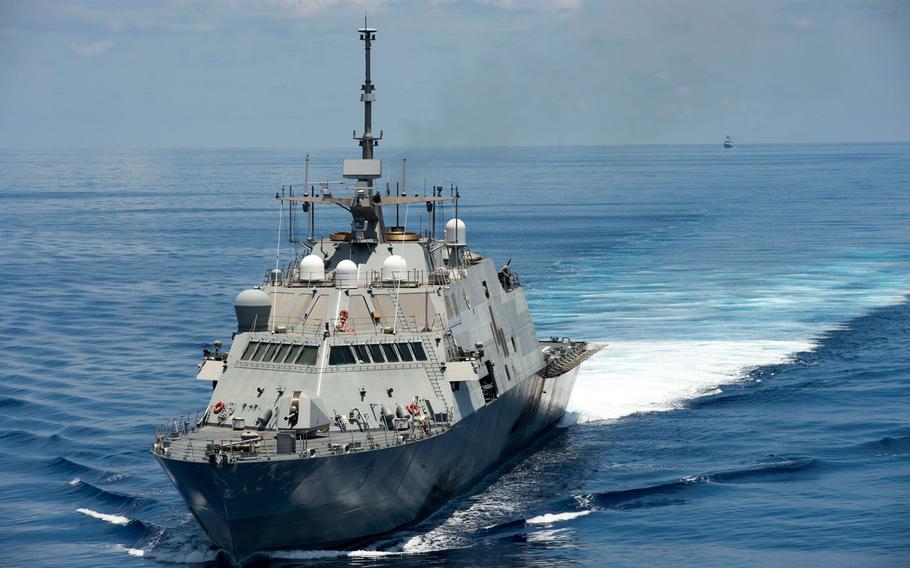 YOKOHAMA, Japan — The USS Fort Worth on Monday patrolled waters near a group of disputed islands and reefs being fortified by China, while the Chinese frigate Yancheng trailed closely behind in the South China Sea.

Half a world away in Washington, reports came out Wednesday that the Pentagon is merely considering sending ships and aircraft to those same waters, citing a senior U.S. official. Few reports mentioned that the Navy was just there.

The average observer should be forgiven for being confused.

The difference lies in whether the Navy designates its operation as a planned patrol or as a “freedom of navigation” operation, a more pointed mission which the U.S. uses to call out nations it believes aren’t following international maritime law.

On Wednesday, 7th Fleet Vice Adm. Robert Thomas declined to discuss specifics of Fort Worth’s patrol near the Spratly Islands, but described patrols in the disputed region as relatively normal.

On Wednesday China expressed “serious concern” about U.S. naval activity in the South China Sea, and Chinese Foreign Ministry spokeswoman Hua Chunying said the U.S. needs to clarify its intentions in the region.

It remains unclear just how close Fort Worth came to some of the territories, which are alternately claimed by Vietnam, the Philippines, Brunei, Malaysia and Taiwan.

Pictures released by the Navy don’t show any above-water land features. The littoral combat ship Fort Worth is among the Navy’s most capable in terms of transiting shallow waters.

If the U.S. undertakes a Freedom of Navigation operation, a ship could come within 12 nautical miles of the reefs that China has been artificially bolstering, according to a Reuters quote Wednesday from an unidentified U.S. official.

Such a move would require White House approval, according to Reuters.

Recent satellite images show a rapid increase in construction on some of the Spratly territories, including a long runway and hangar bay on one island.

China has repeatedly dismissed concerns about the construction and maintained its claims to about 90 percent of the South China Sea, based on what it deems historical discovery.

“We won’t accept anyone pointing a finger at us when we build in our own courtyard,” China Foreign Minister Wang Yi told reporters in March in Beijing.

Some of the islands claimed by China are within the 200-nautical mile Exclusive Economic Zone of other nations. The Philippines has an international court claim against China over some of those claims, though China has declined to participate.

In 2014, the U.S. conducted freedom of navigation operations concerning the “excessive maritime claims” of 19 countries and Taiwan, according to a 2015 DOD report to Congress.

Most of the countries on the list are either generally friendly to the U.S. or even treaty allies, such as South Korea and the Philippines.

The most common U.S. complaint is that nations are extending their coastal waters in contravention of international law.