US moving forces in response to South Sudan violence 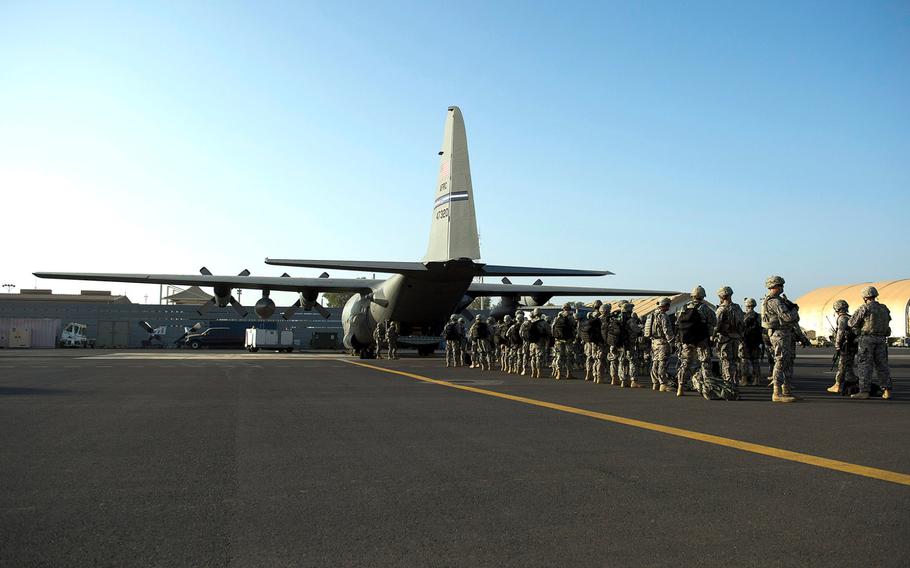 STUTTGART, Germany — Three of four U.S. Navy SEALs wounded after coming under fire during rescue efforts in South Sudan on Saturday are being evacuated to Germany for treatment at the Landstuhl Regional Medical Center, the U.S. hospital near Ramstein Air Base, military officials said Monday.

The fourth servicemember who suffered more serious injures cannot be moved at this time and remains in Kenya for treatment, Defense officials said.

“One of them had a lot of bleeding, and the complications are related to that,” said a Defense official, who requested anonymity because he was not authorized to speak on the matter. The servicemember remaining behind was being treated at a Nairobi hospital by an American Critical Care Air Transport Team, an intensive care unit, Pentagon spokesman Col. Steve Warren said Monday.

On Saturday, military officials reported that all four were in stable condition after the attack. The three troops being transported, aboard a C-17, are expected to arrive in Germany by Tuesday, Africa Command spokesman Benjamin Benson said.

The servicemembers were Navy SEALs, said the unnamed defense official.

The SEALs, who were flying aboard tilt-rotor Ospreys, were trying to land in the city of Bor, capital of eastern Jonglei state, to evacuate Americans when they came under small arms fire that penetrated the aircraft from the bottom, said the official. All of the wounds suffered by the four personnel were to the lower body, the official said.

“Other than the aircraft being fired upon, we do not have any further information on hostilities against U.S. forces, nor do we have information indicating U.S. forces returned fire,” Benson said.

The U.S. citizens in Bor were evacuated Sunday to the nation’s capital of Juba on civilian helicopters in coordination with the United Nations and the government of South Sudan, the State Department said.

“The United States and the United Nations, which has the lead for securing Bor airport in South Sudan, took steps to ensure fighting factions were aware these flights were a humanitarian mission,” the State Department reported.

Warren told reporters at the Pentagon that in light of the four troops being wounded, the military was repositioning forces.

“The combatant commander is repositioning forces in the region in an effort to give himself the maximum flexibility to respond to any follow-on requests from the Department of State,” Warren said. “As we’ve seen with our force members who have already been wounded, there is risk associated with this and any military operation.” He wouldn’t say specifically what kind of forces are being repositioned or where, nor whether any additional forces would move into South Sudan.

However, the defense official said 150 Marines with the Marine Air Ground Task Force based in Moron, Spain, were going to the Horn of Africa, along with a complement of Ospreys and KC-130s. The MAGTF has been in Moron since early this year to increase the ability of AFRICOM to respond to crises in Africa.

“The secretary of defense has been following this situation very closely,” Warren said. “He’s in touch with his combatant commander on the ground continuously.”

Warren said forces are being repositioned within AFRICOM, and are not being brought in from Central Command or other areas.

“The combatant commander needs to ensure that he’s got the capabilities ready to respond to any request from the State Department” for more evacuations, Warren said. When asked what kind of operations the forces might undertake, he said “evacuations and the security associated with an evacuation.”

Although defense officials said the U.S. military footprint in Juba could be increased rapidly if necessary, experts said they did not see that happening, at least as part of any military operation extending beyond evacuation efforts.

“I would say that is extremely unlikely,” said Jason Mosely, a regional expert at the London-based Chatham House think tank.

AFRICOM also said its East Africa Response Force’s role is limited: provide security reinforcement to the U.S. Embassy in South Sudan as part of a State Department request for assistance with ”an ordered departure of Embassy personnel,” Benson said in a statement Monday. “U.S. military personnel have been dispatched only to support U.S. Embassy operations.”

During the past couple of years, the U.S. military has increased its activity in Africa, most notably in the form of air power during operations in Libya that resulted in the overthrow of Moammar Gadhafi in 2011 and providing airlift support to French troops fighting Islamic militants in Mali. However, outside of occasional counter-terrorism raids in places such as Somalia, the U.S. has generally been reluctant to insert troops into African hotspots.

The latest violence in South Sudan, caused by conflict between rival factions within the country’s military, appears to lack the type of broader threat that can trigger deeper U.S. military engagement.

President Barack Obama, who is monitoring the unrest while on family vacation in Hawaii, informed Congress on Sunday that he “may take further action to support the security of U.S. citizens, personnel and property, including our Embassy, in South Sudan,” according to a White House statement.

Over the weekend, Secretary of State John Kerry called South Sudanese President Salva Kiir “to discuss ways to stop the violence in South Sudan,” according to the State Department. During that call, Kerry raised the issue of the safety of U.S. citizens.

As of Sunday, about 380 U.S. officials and private citizens had been evacuated along with 300 citizens of other countries, the State Department reported.