US military wraps up aid mission in Philippines 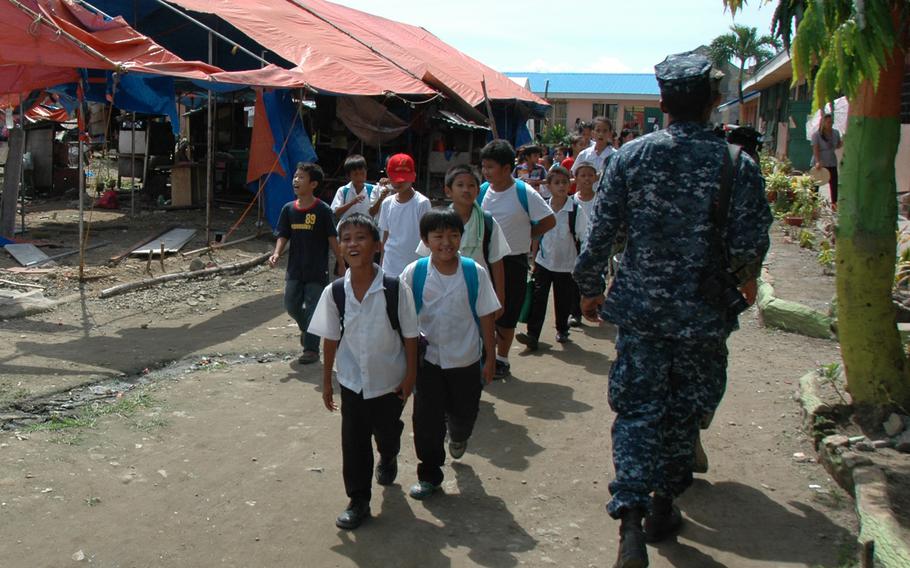 A sailor and Filipino school children pass the Alvarez Tent City, the Philippines, in July 2014. Typhoon evacuees were living there and some still occupy classrooms at the childrens' school, more than seven months after the devastating storm hit the islands. (Seth Robson/Stars and Stripes)

A sailor and Filipino school children pass the Alvarez Tent City, the Philippines, in July 2014. Typhoon evacuees were living there and some still occupy classrooms at the childrens' school, more than seven months after the devastating storm hit the islands. (Seth Robson/Stars and Stripes) 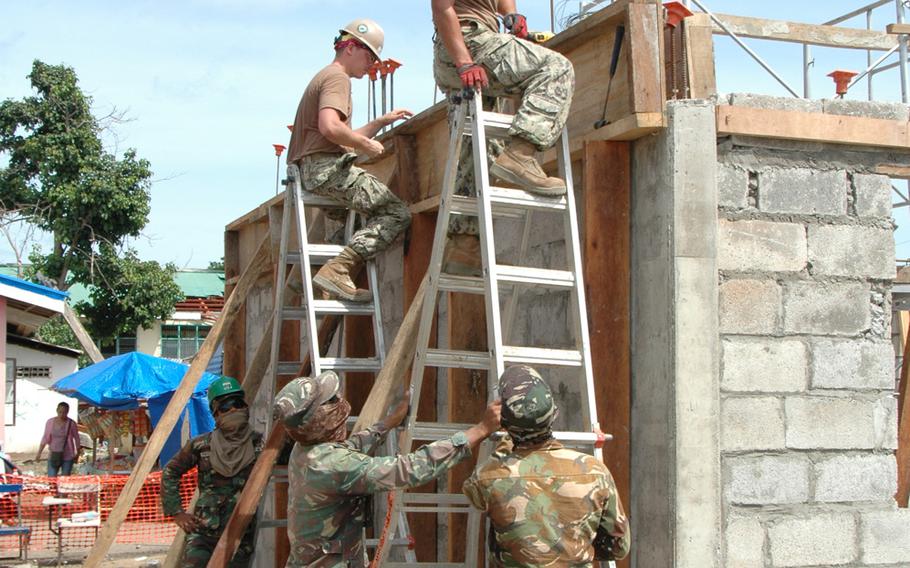 U.S. Navy Seabees and Filipino troops build classrooms in Tacloban, the Philippines, in July 2014. The island nation is still recovering from a devastating typhoon that hit more than seven months ago. (Seth Robson/Stars and Stripes) 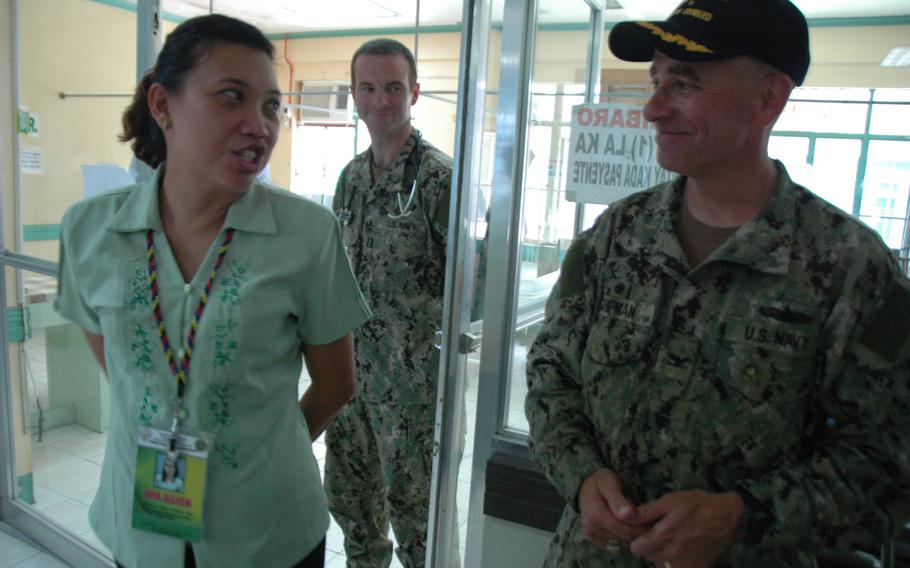 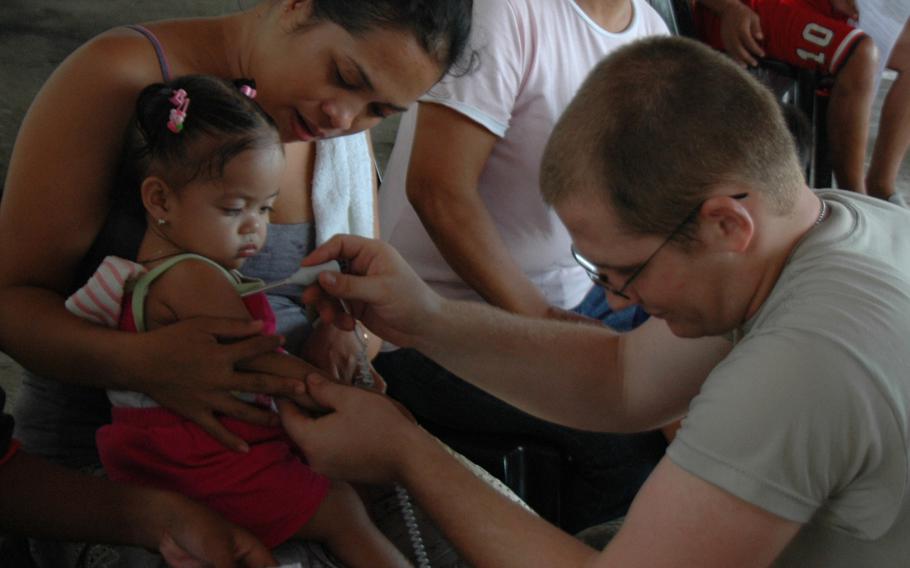 TACLOBAN, Philippines — The U.S. military poured in emergency aid after one of the deadliest storms on record devastated large swaths of the Philippines.

This month, it came back to help foster longer-term recovery in the hardest-hit city.

Some 150 U.S. military personnel, along with small group of civilian aid workers, traveled to Tacloban this month to do engineering, medical, veterinary and other aid work as part of a mission called Pacific Partnership 2014. The mission ends Tuesday.

Typhoon Haiyan and its massive storm surge virtually flattened the city last November, killing more than 6,000 people and causing billions of dollars in damage. After the storm, the USS George Washington aircraft carrier was diverted from a port visit to Hong Kong, and U.S. military transport planes and helicopters were quickly hauling rescue personnel, food and water to the city’s heavily damaged airport.

Today, the roads around the town are clear of the debris that blocked them in the days after the disaster. Many buildings still lack roofs, but most of the people who fled to Manila on packed C-130 military transport planes have returned and are hard at work running businesses, attending school or repairing damage.

A group of Navy Seabees, who arrived ahead of other Pacific Partnership personnel, has been building classrooms at San Fernando Elementary School in downtown Tacloban for a month. The school sustained heavy damage in the storm and had to be closed during the cleanup. Now students, packed 70 to a class, are doing extra work to catch up.

Utilityman 2nd Class Matthew Murfin, 24, of Vernon, Illinois, was toiling in the hot sun at the school last week, along with a dozen other Seabees, most from Naval Mobile Construction Battalion 1 out of Gulf Port, Mississippi. The Seabees had been working there for a month.

When they weren’t hammering nails or pouring concrete, the Seabees were playing games with the kids, he said.

“Part of our mission is interacting with the locals,” Murfin said. “It’s just something to show that we aren’t just here to work and leave. We’re here to build a relationship with these people and show a little compassion about what happened.”

The typhoon orphaned some of the students, who have been taken in by other families, Murfin said.

“I feel terribly for them,” he said. “No kid should ever have to go through something like that.”

The U.S. military has a history of helping out in the Philippines, which is regularly battered by typhoons, earthquakes and volcanoes. Winning hearts and minds is particularly important now as the country, which closed U.S. bases there more than two decades ago, has recently decided to let the military access them again.

“It has nothing to do with China,” said commodore of the mission, U.S. Navy Capt. Brian Shipman, in reference to the territorial disputes many nations in the region have with their larger neighbor. “It has everything to do with bad things that have happened to people in this area.”

In past years, U.S. military doctors visiting places like the Philippines have provided a lot of direct care, but these days they try to focus on passing on knowledge to local professionals so they leave an enduring impact, said Commander Steven Romero, 43, a Navy cardiologist from San Diego.

He has been doing “subject-matter expert exchanges” with Filipino heart doctors for a month, showing them how he takes ultrasound images of hearts that can show muscle weaknesses or blocked or leaky valves.

“Heart surgery isn’t an option for a lot of these people,” he said of local residents. “If they have money, they can fly to Manila, but there is no heart surgery here. They just don’t have the facilities.”

Wilson noted that Filipinos mostly do open surgery whereas, U.S. hospitals do a lot of keyhole procedures. The hospital in Tacloban has some keyhole surgery equipment, but it wasn’t clear if it had everything it needed to do an operation, he said.

“I’m going to see what else they need to make it functional,” he said.

Romero said the medics see whoever shows up at the clinics and typically deal with things such as diarrhea, high blood pressure — and a batch of expectant mothers.

“We are seeing a lot of pregnant women in Tacloban,” he said. “It is eight months after the typhoon and without electricity or television, there was a baby boom. A lot of these ladies are close to delivering.”