US military uses strategy from ISIS fight to attack Taliban 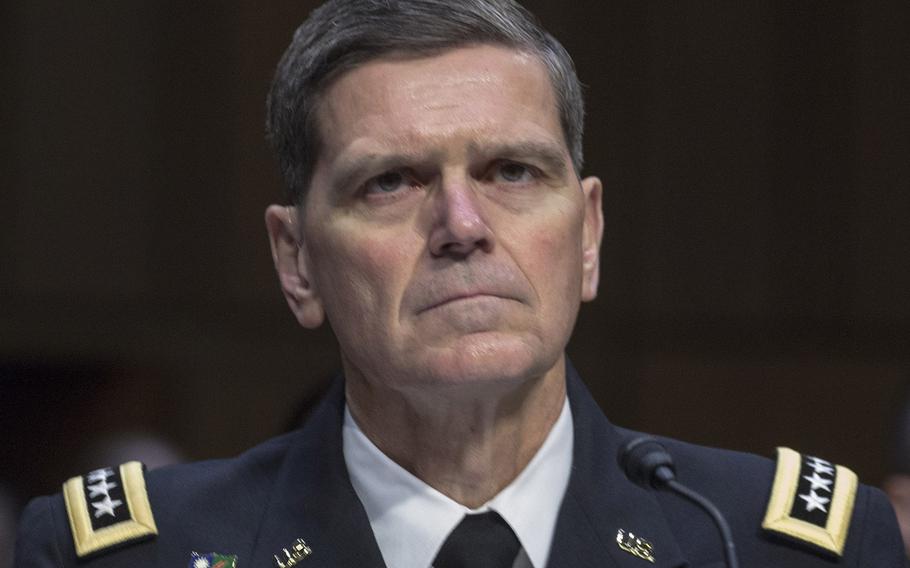 The U.S. military is ratcheting up its attack on Taliban funding streams in Afghanistan, where troops are using a strategy that paid dividends in the battle against the Islamic State in Iraq and Syria, the general in charge of U.S. Central Command said Tuesday.

“This is a lesson learned from Iraq and Syria, where we got serious about going after the funding streams that supported ISIS,” Army Gen. Joseph Votel said during a Senate Armed Services Committee hearing. “We started to see an immediate impact, so that is exactly the intention here.”

As the war in Afghanistan enters its 17th year, the U.S. military is again building up in the country. With ISIS largely defeated in Iraq and Syria, the United States is shifting more assets from the region to the war effort in Afghanistan, Votel said.

Part of the rejiggered U.S. strategy is to once again go after a multibillion dollar drug trade in Afghanistan that the Taliban has relied on for years to fund its operations. But the trade has proven resilient despite international efforts to neutralize it.

In 2017, opium production increased 87 percent from the previous year, according to U.N. data.

NATO has long been vexed by Afghanistan’s drug economy. While the trade benefits the Taliban, eliminating it also hurts impoverished poppy producers who have few viable sources of income. Some critics argue a heavy bombing campaign could increase popular support for the Taliban.

Votel said there are signs the strategy is “proving effective.”

“Here we are 17 years later. It remains to be seen,” said Sen. Mazie Hirono, D-Hawaii.

The U.S.-led effort in Afghanistan has gone after the drug trade before, from targeting labs to funding efforts aimed at enticing farmers to grow alternative crops such as pomegranates.

In 2009, former Army Gen. John Craddock, who served as NATO Supreme Allied Commander, caused a stir among allies when he floated a recommendation that troops shoot suspected Afghan traffickers without warning. The idea was never adopted.

With no end in sight to the longest U.S. war in history, Hirono said there is skepticism that a difference can be made in Afghanistan with the strategy, much of which has been already tried.

Votel said the United States continues to apply pressure on Pakistan to do more to root out sanctuaries used by militants to conduct cross-border attacks in Afghanistan. The strategy has gotten Pakistan’s attention, the general said.

“[But] I cannot tell you we have seen decisive changes [from Pakistan],” he said.

Still, Votel said he was hopeful.

“I do think we are on the right track with this,” he said.