US military to complete THAAD deployment in S. Korea despite protests 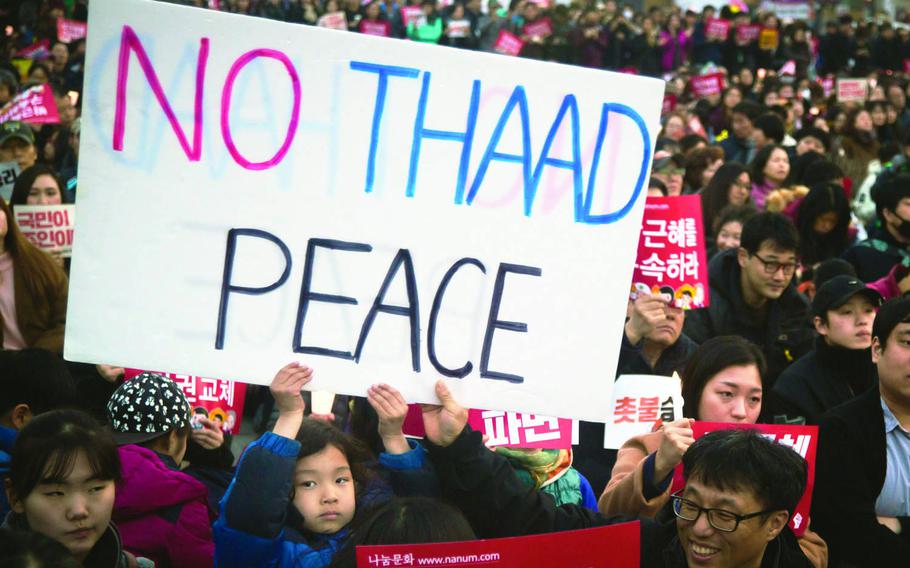 SEOUL, South Korea — The U.S. military will deploy additional launchers for an advanced missile-defense system Thursday in a remote area of South Korea despite local protests, the defense ministry said.

Seoul said Monday that it had cleared the last administrative hurdle to installing four more launchers soon to complete the deployment of the anti-missile battery known as THAAD, aimed at countering the growing threat from the North.

The plan has met with regular protests in Seongju, the southeastern area where the Terminal High Altitude Area Defense system is stationed.

Protesters gathered again Wednesday near the former golf course that is housing THAAD, saying they would try to try to block the entrance with cars and tractors.

But U.S. and South Korean military officials say the system is needed urgently as the North has made rapid advances in its nuclear weapons program.

The defense ministry stressed the launchers were being deployed on a “temporary” basis pending a full environmental impact assessment. U.S. Forces Korea’s public affairs office did not immediately respond to a request for comment.

USFK began deploying the anti-missile battery known as THAAD with two launchers and the radar in late April in an overnight operation that many saw as an effort to rush it into place before May 9 elections to replace ousted President Park Geun-hye.

Her administration made the THAAD agreement with Washington in July 2016 over the objections of local protesters, who fear it will have adverse effects, and China, which fears the system’s powerful radar could be used against it as well.

Moon said the installment could be completed at least on a temporary basis pending a full environmental assessment of the site. But he promised the deployment would be conducted in a transparent and democratic way.

The environmental ministry said Monday that it has given conditional consent after finding the adverse impact on the area from THAAD was limited.

Critics also question THAAD’s effectiveness, saying North Korea could try to overwhelm it with a massive barrage and its location will do nothing to protect Seoul.

U.S. and South Korean military officials insist THAAD is needed to complement Patriot missiles that are already in position to provide security for the South Korean capital and surrounding areas, which have a population of some 25 million.

Lt. Gen. Thomas Vandal, 8th Army commander, has said the site in Seongju, about 190 miles southeast of Seoul, to maximize its benefits. He said earlier this year that the battery will protect 10 million South Koreans in the area outside of Seoul in addition to U.S. bases and vital seaports.

THAAD will ultimately consist of six truck-mounted launchers that can fire up to 48 interceptors targeting missiles at a high altitude after they’re detected by the system’s X-band radar.