Maryland National Guard cyberwarfare operators support Estonian service members during an exercise in Estonia in 2018. The U.S. military has dispatched a team to Montenegro, in part to study the cyber tactics of adversaries. (Kurt Rauschenberg/U.S. Air Force)

Maryland National Guard cyberwarfare operators support Estonian service members during an exercise in Estonia in 2018. The U.S. military has dispatched a team to Montenegro, in part to study the cyber tactics of adversaries. (Kurt Rauschenberg/U.S. Air Force) 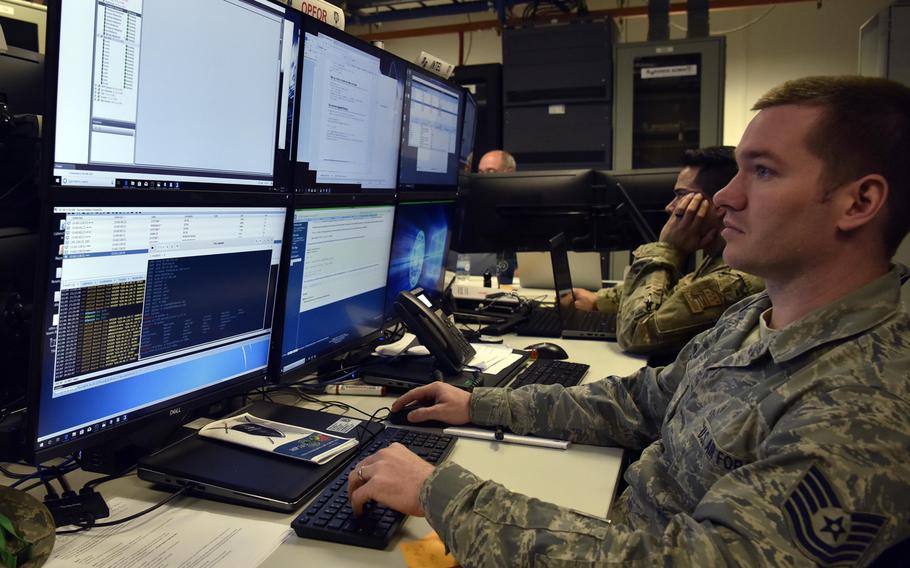 Tech. Sgt. Noe Kaur launch cyberattacks as part of an exercise at Ramstein Air Base, Germany in March 2019. The U.S. military has dispatched a team to Montenegro, in part to study the cyber tactics of adversaries. (Renae Pittman/U.S. Air Force)

STUTTGART, Germany — The U.S. military has dispatched an elite cyber team to the tiny Balkan nation of Montenegro to protect networks and study the tactics of adversaries like Russia, ahead of national elections next year.

American service members will work alongside Montenegrin cyber defenders “to counter malicious cyber actors on critical networks and platforms,” the U.S. Embassy in Montenegro said in a statement this week.

While the statement did not name any adversaries, both the U.S. and Montenegro have held elections where Russia has been suspected of backing cyberattacks and misinformation campaigns.

The deployment, in coordination with U.S. European and Cyber Commands, is intended to prepare for adversaries ahead of U.S. and Montenegrin elections in 2020, the statement said.

Montenegrin officials have alleged that Russian military intelligence operatives and Serbian nationalists sought to influence Montenegro’s 2016 elections, in a bid to prevent them from joining NATO.

Moscow has long opposed NATO expansion eastward, seeing it as a security threat.

But eight months after the interference bid, in June 2017, Montenegro became the 29th member of NATO. The Balkan country remains a focal point for the U.S. and the alliance when it comes to defending against cyberattacks from Russia.

U.S. and Montenegrin specialists will work together to identify “malicious cyber actors’ capabilities and tools,” allowing the two countries and “other allies and partners to prevent future network intrusions and cyber-attacks,” the U.S. Embassy said.

Montenegrin Defense Minister Predrag Boskovic said resisting cyberattacks is key to protecting the Western Balkans “from those who would keep this part of Europe in conflicts, setbacks and economic decline.”

“Montenegro is among the first in Europe to face unconventional attacks on its democracy and freedom of choice,” he said in a statement.

American cyber experts were also dispatched to Montenegro last year to lend support, and in September, CYBERCOM’s Gen. Paul M. Nakasone said the Army is developing a new “persistent cyber training environment,” which will allow units to train virtually on the kinds of networks used by adversaries.

EUCOM declined to comment on the structure of the cyber defense teams being sent to Montenegro, citing the need to protect tactics.

“As in all domains, we work together in cyberspace to learn from one another and help harden the networks on which the United States and our partners depend,” EUCOM said in a statement.

The arrival of U.S. teams in Montenegro underscores “our close partnership in cyber defense, which helps to protect our shared values and interests,” U.S. Ambassador to Montenegro Judy Reinke said in a statement.