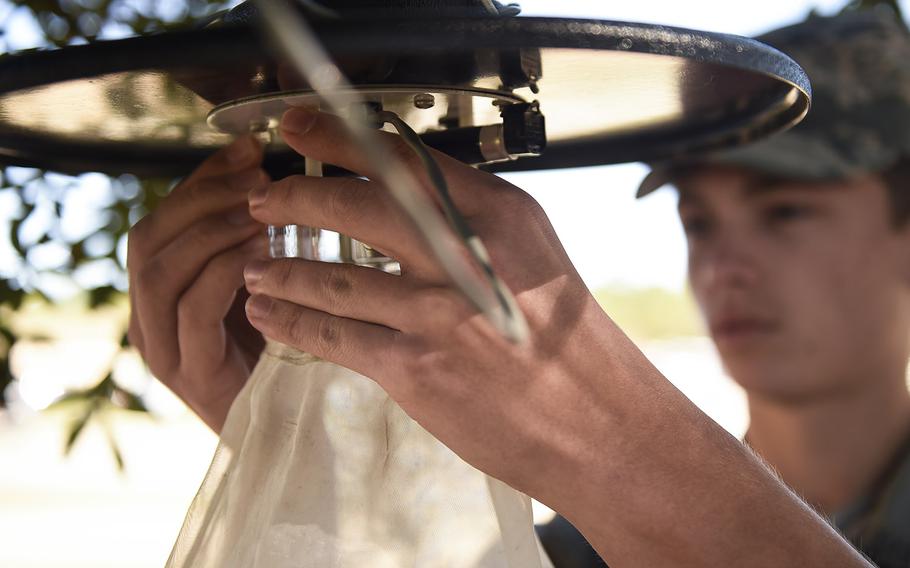 WASHINGTON — The mosquito species capable of carrying the Zika virus is likely found on 190 U.S. military installations in 27 states and three territories, according to a Pentagon memo written in March.

The military will expand its existing mosquito surveillance and control programs at those installations in an effort to protect troops and their families from the virus that expanded swiftly across South and Central America last year, according to the March 17 memo signed by Dr. Jonathan Woodson, assistant defense secretary for health affairs, and Peter J. Potochney, deputy assistant defense secretary for basing. Installation personnel will regularly trap the mosquitoes and test them for the virus. They will also be responsible for eliminating areas of standing water, where mosquitos often breed.

The national Centers for Disease Control and Prevention has determined Zika is almost undoubtedly connected to pregnancy complications that cause severe fetal abnormalities, including microcephaly, a rare condition that causes unusually small heads and lack of brain development in children. Hundreds of babies in South American have been diagnosed with the condition since the Zika outbreak began.

The virus’ connection to such birth defects have led the World Health Organization to deem it a global emergency.

While no cases of Zika have been transmitted by mosquitos in the United States, the CDC has warned that imported cases could eventually lead to the “local spread of the virus in some areas” of the country, primarily in the south and southwest, where the Aedes aegypti mosquito, the primary transporter for the virus, lives.

The area the Defense Department determined could be impacted stretches from west Texas east to Florida and as far north as New York, according to the memo. It also includes Puerto Rico and Guam.

“DOD experts used historical mosquito surveillance records coupled with temperature and habitat suitability for the Aedes mosquito vectors to predict where mosquitoes of concern could potentially be found,” Cabiness said. “The DOD predictions are very similar to the CDC predictions for vector distribution.”

Most people who contract the virus will likely never know they had it, according to the CDC, which said only about one in five people with Zika become symptomatic. People who do show symptoms typically experience a mild illness that lasts several days to a week.

As of May 18, 544 Americans, including 157 pregnant women, inside the 50 states have been diagnosed with Zika, according to CDC statistics. All of those cases, including 10 transmitted sexually, have been contracted while traveling in areas already impacted by the virus.

The Defense Department did not immediately provide statistics on American troops who have contracted the virus.

In March, Navy Adm. Kurt Tidd, commander of U.S. Southern Command, said two male servicemembers – one serving in Colombia and the other in Brazil – had contracted the virus. Last year, at least one pregnant servicemember was evacuated from South America to the United States to avoid the virus.