US military's South Korean workers could be facing furloughs 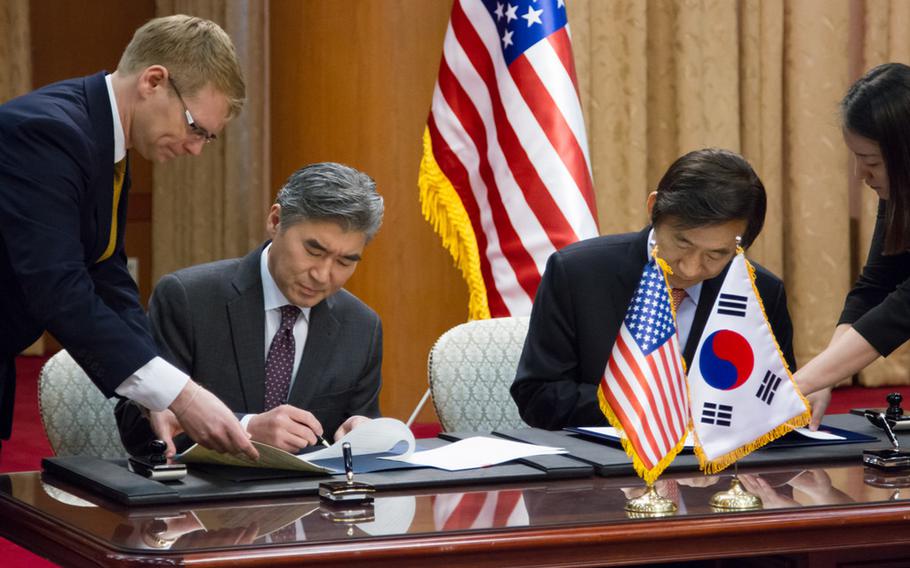 U.S. Ambassador to the Republic of Korea Sung Kim, left, and Republic of Korea Foreign Minister Yun Byung-Se signed the U.S.- ROK Special Measures Agreement Feb. 2, 2014. The agreement will be submitted to U.S. and ROK legislatures for ratification. Without the agreement, Koreans working for the U.S. military could face furloughs starting April 1. (Brian Gibbons/U.S. Army)

SEOUL — Thousands of South Koreans working for the U.S. military could be furloughed beginning April 1 if the National Assembly does not ratify what has become a controversial defense cost-sharing agreement, officials said Friday.

As many as 8,500 employees — about 70 percent of all Korean employees on the peninsula — could be affected, according to South Korea’s Foreign Ministry, which said it could not predict the length of the furloughs.

The new, five-year Special Measures Agreement, which the U.S. and South Korea worked out in January, would increase Seoul’s annual contributions toward the upkeep of U.S. troops on the peninsula by about 6 percent, to 920 billion won, or about $861 million. Yearly increases due to inflation will be capped at 4 percent.

The last SMA was signed in January 2009, setting South Korea’s contribution for that year at about $775 million, with provisions for increases for inflation in following years.

The new agreement, which was signed Feb. 2 by U.S. Ambassador to South Korea Sung Kim and South Korean Foreign Minister Yun Byung-se, must be ratified by the legislative bodies of both countries before going into effect.

It was not immediately clear if the U.S. Congress had approved the agreement. However, the measure remains stalled at the subcommittee level at the National Assembly, with some politicians arguing that it should be renegotiated and extra provisions included to increase oversight of U.S. Forces Korea’s use of the money, South Korean media reported. The National Assembly is not scheduled to meet in March, but will hold an extra session in April, according to an Assembly officer. A date for that session has not been set.

It was not immediately clear how or if SMA funds directly contribute to the salaries of Korean employees. MOFA said the U.S. cannot afford to pay those workers unless it receives more money through the latest SMA.

USFK said in an email Friday that “uninterrupted employment is contingent upon the Republic of Korea’s timely ratification of the SMA.”

“We are hopeful that this issue will be resolved quickly for the sake of our employees and their families,” the statement said.

USFK did not say how military operations might be affected by any potential furloughs.

MOFA said on Friday that the Korean government pays 70 percent of wages for South Korean employees, and the U.S. military pays the remaining 30 percent.

South Korea has contributed financially toward the upkeep of USFK forces through SMAs since 1991. Negotiations over the latest SMA began last summer but dragged on because of differences over how much South Korea would contribute, along with concerns in Seoul that the U.S. was not being transparent in its use of funds.

A Congressional Research Service report issued this month said in response to South Korean criticism that the new SMA increases the transparency of USFK’s use of South Korean money.

Under the new agreement, USFK must submit an annual report on SMA funds to the National Assembly, and the South Korean government must approve every contract that uses SMA funds.

“Even with these changes, Korean opposition lawmakers complained that the agreement is ‘humiliating,’ ” the report said. It added that some believe USFK might use improperly use SMA funds to finance portions of the military’s plan to relocate the bulk of its forces to Camp Humphreys and other hubs south of Seoul.

MOFA previously declined a request to explain why Seoul believes its oversight of USFK’s use of South Korean funds has been inadequate.

Kim Song-yong, head of the USFK Korean Employees Union that represents the civilian workers, said Friday that they feel like they are being “taken hostage” and are weighing options that include going on strike.

“If they are going to give us unpaid vacations, then be our guest,” he said, adding that the Korean government should be doing something to protect the workers and ensure their job stability.