US military relief effort for Philippine typhoon winding down 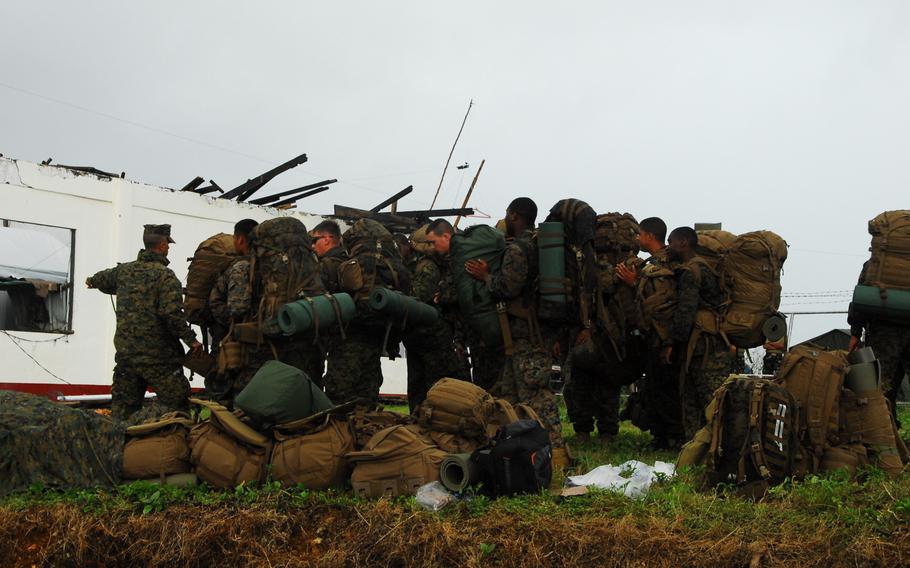 Marines prepare to leave Guiuan on Friday.After more than a week on the ground helping Typhoon Haiyan victims, the Marines are packing up and heading back to Okinawa. (Seth Robson/Stars and Stripes)

Marines prepare to leave Guiuan on Friday.After more than a week on the ground helping Typhoon Haiyan victims, the Marines are packing up and heading back to Okinawa. (Seth Robson/Stars and Stripes) 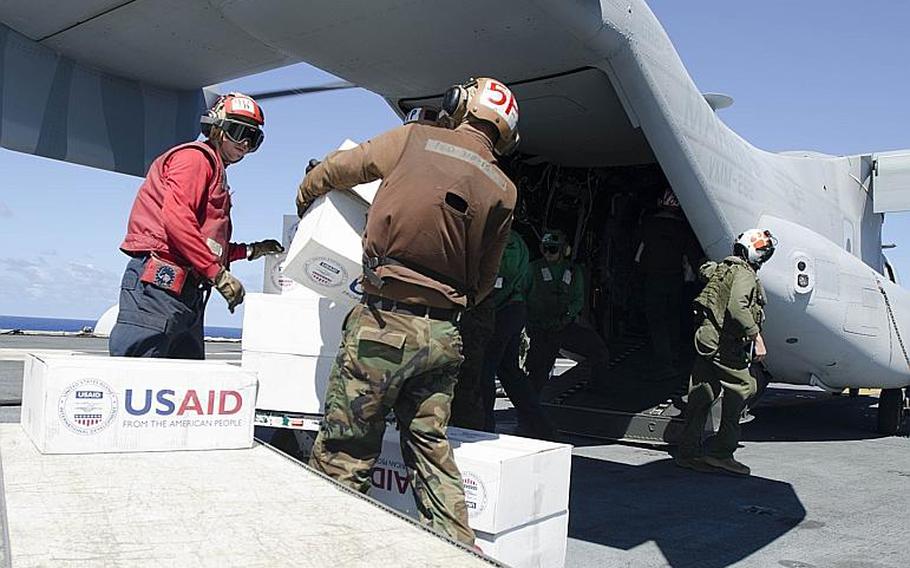 CLARK AIR BASE, Philippines — The U.S. military’s assistance for survivors of Typhoon Haiyan appears to be rapidly winding down as responsibility for relief efforts in a number of areas shifts to Philippine control.

The Philippine military assumed responsibility Sunday for coordinating all international maritime forces involved in aid operations, according to the U.S military, a day after it took over relief efforts at the Guiuan Airfield, a key hub for aid distribution.

At its peak, 13 U.S. ships and nearly 8,000 sailors and Marines took part in Operation Damayan following the Nov. 8 storm that left thousands dead or homeless. U.S. forces helped the Philippine military coordinate and move 430,000 liters of water and 211 tons of food and other supplies from ship to land.

Philippine Maj. Gen. Jeffrey Delgado, deputy commander of Joint Task Force Yolanda, thanked the U.S. for its “quick response from day one,” according to a U.S. statement.

“Indeed, it will be a lasting memory written in the minds of the Philippine people,” he said, crediting the relationship between the two governments as “a key enabler to the seamless integration of forces.”

The international response to the typhoon has shifted dramatically in the past week from emergency relief to long-term recovery as access to ports and roads rapidly improved and aid groups established a significant presence in hard-hit areas.

U.S. military operations are “shifting from relief execution to a focus on continued coordination with the government of the Philippines, non-governmental organizations and multinational aid organizations for as long as its distinctive capabilities are needed,” the statement said.

On Friday, Australian forces assumed responsibility from the U.S. for relief efforts in Ormoc, where as many as 90 percent of structures were damaged.

The Haribon Passenger Terminal in Clark’s Air Force City was quiet last week, but by Monday afternoon it was slowly coming to life as servicemembers began returning from Tacloban and other affected areas. Bags lined sidewalks, airmen washed down equipment returned from the disaster zone, and Marines perused Operation Damayan t-shirts for sale emblazoned with the slogan, “United As One.”

Many had worked marathon hours in difficult conditions, like Marine Staff Sgt. Eric Durbin, part of a mobile air traffic control team from Okinawa that spent roughly a week at the Guiuan airfield. He did 24-hour “shifts” during his first few days, catching naps when he could.

He was glad he was there to help the survivors of one of the most powerful storms on record.

“Even though I didn’t assist them (in person), I was able to help the planes come in to assist them,” he said.

“This was one of the best experiences that I’ve ever had with air traffic control,” said Cpl. Maxwell Wimmer, also on the team. “Yes, it was long hours, but it pretty much flew by because we were always so busy.”