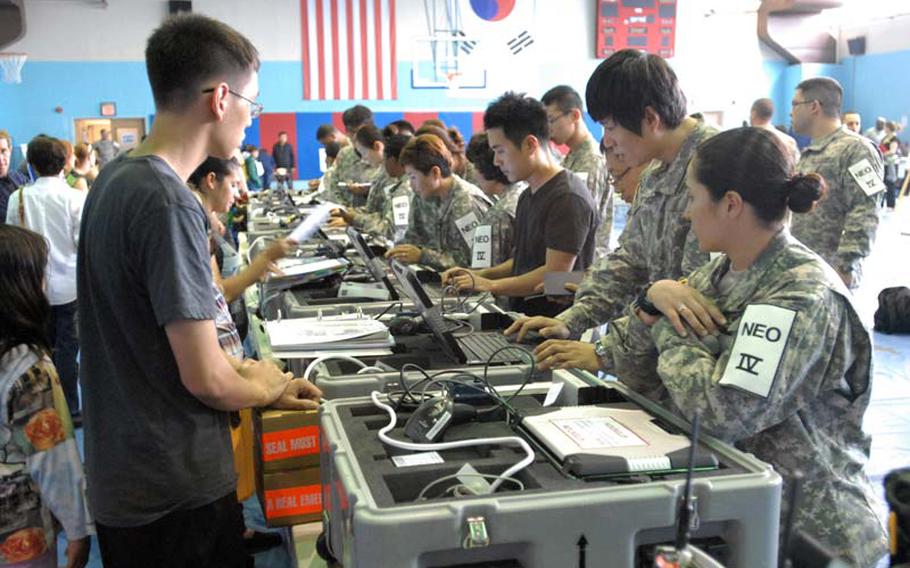 SEOUL, South Korea — U.S. Forces Korea will hold semiannual evacuation drills for families of military forces and other noncombatants later this month against the backdrop of rising tensions with North Korea.

The exercise known as Courageous Channel, which will be held from Oct. 23-27, is basically a dress rehearsal to make sure everybody’s ready to get out in a hurry in case of war or another emergency.

Military spouses, children and others wearing backpacks and pulling suitcases will file through assembly points on U.S. bases where wardens will make sure documents are updated and procedures are explained.

Information also will be provided about power of attorney, financial concerns, pets — which are considered family members — and other issues.

The military also has recently selected groups to be transported all the way to Japan, which would be a likely first stop in a real emergency.

The drills, which happen twice a year, are a stark reminder of the potential dangers of living in a country that remains technically at war with North Korea after the 1950-53 war ended in an armistice instead of a peace treaty.

About 28,500 U.S. servicemembers are stationed in South Korea, along with tens of thousands of loved ones and civilian contractors and other Defense Department employees.

This year’s operation will take place amid rising fears that the standoff over North Korea’s nuclear weapons program could erupt into conflict. President Donald Trump has warned that he will “totally destroy” the North if forced to defend the United States or its allies.

But the military insists the drills aren’t linked to current events.

“We are currently planning no major adjustments or changes to the scope or scale of this year’s training,” USFK spokesman Col. Chad Carroll said in an email.

“Like other annual training exercises here on the peninsula, Courageous Channel sharpens our ability to stay ready across our spectrum of tasks,” he added. “This year’s exercise is not uniquely connected to any specific elements of the current geopolitical situation.”

Underscoring the sensitivity, several U.S. servicemembers and family members received fake messages saying an evacuation order had been issued last month. The false alarms were quickly revealed as a hoax.

Participation is mandatory for all family members of servicemembers and is encouraged for Defense Department contractors and their families, U.S. Embassy staff and any other American civilians with base access, according to guidelines.

The State Department is responsible for ordering evacuations, with the military acting as facilitators.

The U.S. Embassy doesn’t provide details about plans to evacuate the tens of thousands of other Americans living in South Korea.

But it “encourages all U.S. citizens traveling to or residing in Korea to register” with the Smart Traveler Enrollment Program known as STEP, which can be done online. It notes the consular section’s website also has relevant information.

Despite decades of tensions, no evacuation has been ordered from South Korea since the war ended. Most recently, U.S. military families and civilians were evacuated from areas in Turkey due to security concerns there last year.

8th Army recommendations for items to keep on hand for possible evacuation:

- A month’s worth of medicine

- Change of clothes, toiletries and towel

- Toys and other items for babies and children