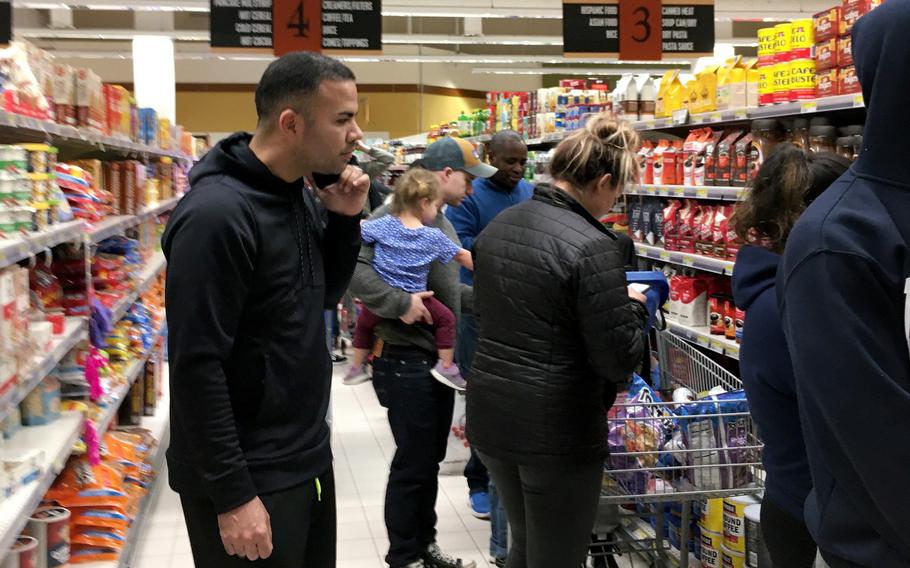 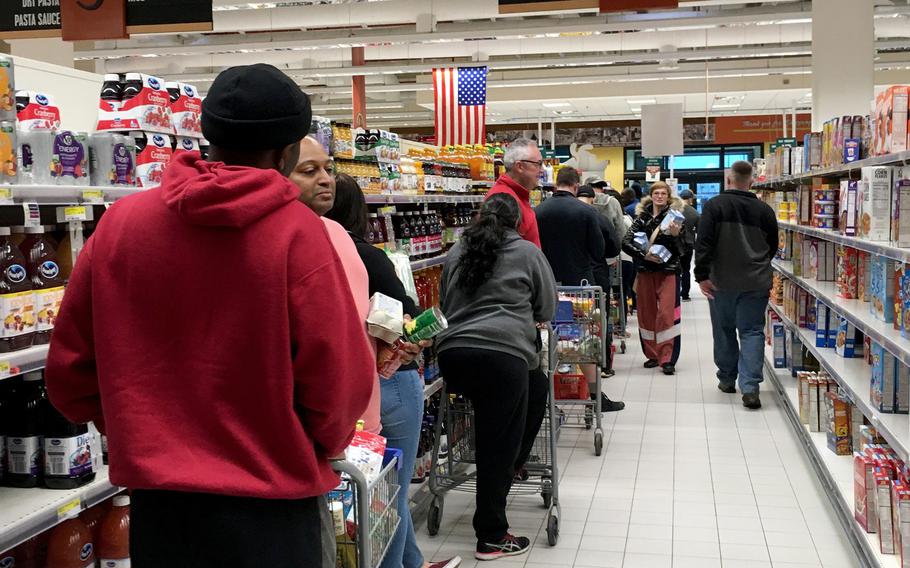 Buy Photo
Vicenza commissary shoppers wait in long lines to check out after stocking up Sunday, Feb. 23, 2020, amid uncertainty about the coronovirus' spread in Italy. The virus has already caused U.S. officials to close base schools, child care centers, gyms and theaters. (Nancy Montgomery/Stars and Stripes) 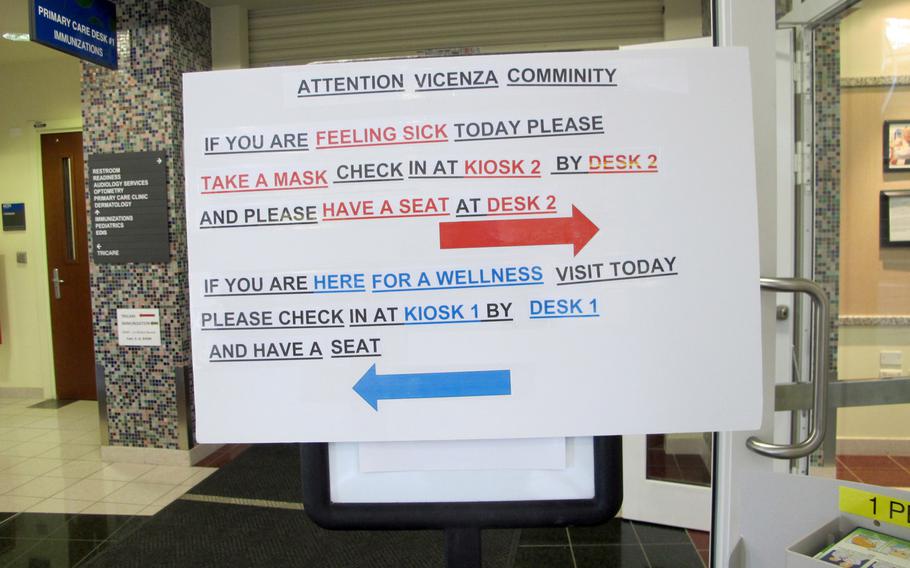 Buy Photo
A sign at the U.S. military health care center in Vicenza, Italy, directs patients to take a surgical mask and go to the primary care desk if they feel unwell. U.S. Army Garrison Vicenza has taken numerous steps to try to stem the spread of the coronavirus, which has infected hundreds in Italy. (Nancy Montgomery/Stars and Stripes)

VICENZA, Italy — The military has moved to try to prevent the coronavirus spreading to U.S. bases in Italy, even as Italian officials struggle to contain the largest outbreak of the respiratory illness in Europe.

In Vicenza, U.S. Army Garrison Italy shuttered on-base schools, child care centers, gyms and churches. Initially, they said they would remain closed through Wednesday, but then they followed the city’s lead and extended the closures until March 1.

While there were no confirmed cases of coronavirus in the city Monday, 200 people have been diagnosed with the illness throughout Italy, including a cluster of at least 22 cases in Vo’ Euganeo, just 30 miles away from Vicenza.

The other confirmed cases were in the Lombardy region, where Italian officials have locked down more than 50,000 people in a dozen towns.

At least six people have died in Italy and 26 people are in intensive care, officials said.

At Aviano Air Base, located in a different province than the Army garrison, base schools remained open but officials have banned service members and their families from traveling to Lombardy and the Veneto.

The 31st Fighter Wing’s health clinic at Aviano has set up a hotline, which anyone who recently visited either area can call to arrange a screening for the virus. Some people who traveled to Venice’s Carnevale, which was cut short Sunday amid coronavirus fears, were told to stay home.

Americans in Vicenza who need to be tested for the virus will be directed to San Bortolo hospital and not the base clinic, which doesn’t yet have access to the diagnostic test for the virus.

So far, the virus response hasn’t affected operations, garrison officials said. But it would if Italians lock down one of the towns where many Americans live, such as Torri di Quartesolo, they said.

On Sunday evening in Vicenza, the commissary was so packed that no shopping carts were available and customers waited in lines for an hour to check out. Officials said that the store had done double its usual Sunday business and stocks of many items were wiped out.

But if all expected deliveries arrived on Monday, there would be no shortages, they said.

“I’m worried about the coronavirus,” one man commented to the woman in line in front of him. "They should spray.”

“Yes, I agree, we should pray,” the woman replied. “That’s what we do in my country.”

At the post exchange, a worker said all the store’s surgical masks had sold out days ago, even though the most commonly available masks aren’t effective against viruses, said Col. Rodney Coldren, chief of Preventive Medicine Services, Public Health Command Europe.

An exchange worker said all the store’s surgical masks had sold out days ago, even though the most commonly available masks aren’t effective against viruses, said Col. Rodney Coldren, chief of Preventive Medicine Services, Public Health Command Europe.

They are recommended for sick people, though, to avoid spreading illnesses.

Young soldiers and civilians said they weren’t too worried.

“I think if you’re young and you’re not immuno-compromised you won’t have any issues. I don’t think it’s different than the flu,” Staff Sgt. Myron Young said, who added that “in fact, I know someone who died of the flu this year.”

The virus seems to spread like influenza. But unlike SARS and MERS, the new coronavirus can be transmitted by people who show no symptoms.

“What makes this more significant is not the severity of the disease but the fact that there’s no immunity to this virus so there are many more people who can be infected,” Coldren said.

He recommended hand-washing once every hour as the best prevention, and urged sick people to stay home.