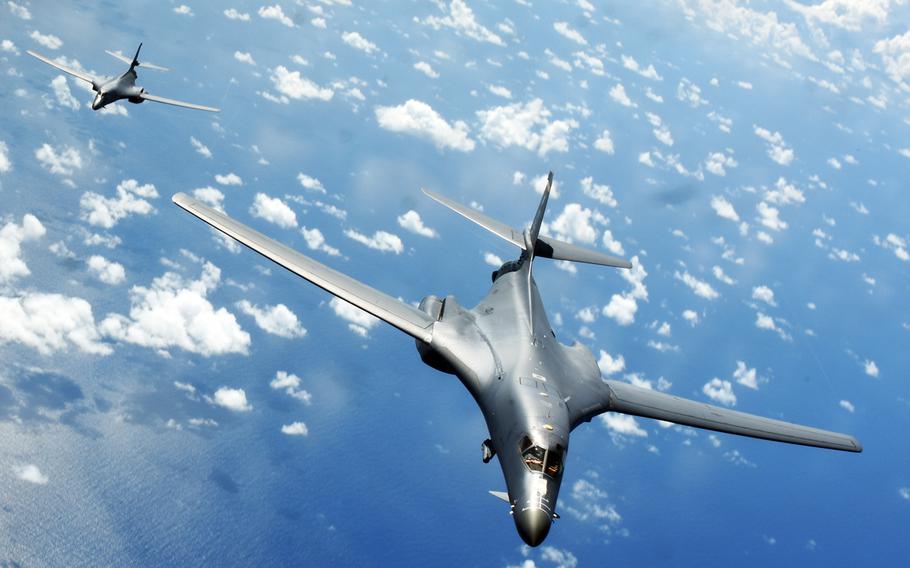 While the press regularly covers Navy warships passing through disputed territory in the South China Sea, U.S. military aircraft operating there often fly under the radar.

“We’ve been flying in and around the South China Sea for really about the past 15 years, and I would probably tell you we’ve done some as recently as this week,” he told reporters on Dec. 6.

There’s more media coverage of warships operating in the disputed territory, where China has built up and militarized tiny islets and reefs, because the Navy often advertises those operations in press releases.

Last month, 7th Fleet announced that the guided-missile destroyer USS Wayne E. Meyer cruised past the Paracel Islands, a region subject to competing claims by China, Taiwan and Vietnam. The day before, the littoral combat ship USS Gabrielle Giffords steamed within 12 miles of Mischief Reef, a low-tide feature in the Spratly Islands.

There haven’t been recent announcements about military planes flying in the area. However, Brown said they happen on a regular basis and involve Air Force bombers, U-2 Dragon Lady reconnaissance planes and RQ-4 Global Hawk drones as well as Navy P-3 Orion and P-8 Poseidon maritime patrol aircraft.

“So, we have quite a bit of activity — air activity — within the South China Sea,” he said. “It doesn’t probably get as much press as what you hear about with the freedom of navigation and the maritime environment, but we do hear about it because we do get … calls from [China].”

Brown spoke to reporters, along with Air Force Chief of Staff Gen. David Goldfein, as the pair hosted a symposium involving leaders of air forces from various Pacific nations at PACAF headquarters on Joint Base Pearl Harbor-Hickam, Hawaii.

“The premise of the symposium is a common belief among our allies and partners that collaboration is required to meet the regional challenges that have global effects,” Brown said. “We’ve got an unprecedented number of air chiefs attending, representing more than one million airmen from around the world, representatives from 18 nations.”

Goldfein told reporters the Air Force has maintained its presence in the Pacific, even as it has shrunk.

“We’re an Air Force that’s 300,000 less airmen and about 3,000 less aircraft than we were even back to 1991, and yet, if you look at our footprint and our posture in the Pacific, we haven’t changed. We’ve come down significantly in Europe. We’ve changed significantly in the United States. Our footprint in the Pacific has been very steady over time.”

Brown said he doesn’t expect significant change in Air Force operations and activities in the Pacific next year.