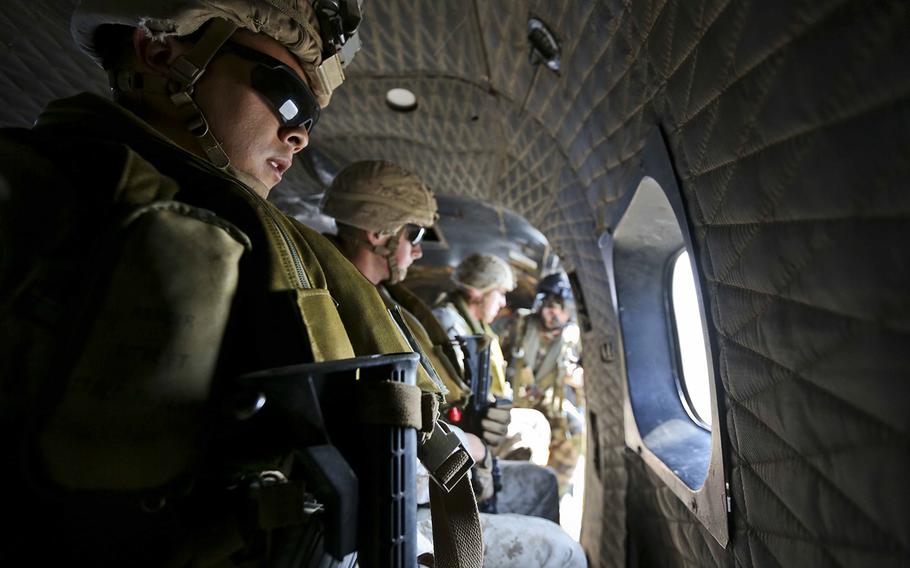 STUTTGART, Germany — All U.S. military flights in Djibouti have been grounded and a major military exercise canceled after two recent accidents in the east African country, the U.S. military said Thursday.

American commanders reached an agreement with the Djiboutian government to pause U.S. military flights following the incidents, said Marine Lt. Gen. Kenneth McKenzie, the director of the Joint Staff. The Navy then canceled the remainder of exercise Alligator Dagger along the Horn of Africa, he told reporters at the Pentagon.

“That’s just a reasonable precaution by the commander on the ground to determine that we’re not doing something that we need to fix,” McKenzie said.

On Tuesday, a Marine Corps AV-8B Harrier jet crashed at Djibouti’s international airport, forcing the pilot to eject from the aircraft. Later that day, a CH-53 helicopter suffered structural damage during a landing in Arta Beach.

“Both incidents are currently under a joint investigation, and we will provide more information when able. A safety stand-down has been initiated for all exercise participants,” said Lt. Christina M. Gibson, a spokeswoman for U.S. Naval Forces Central Command.

The pilot of the Harrier suffered minor injuries. The aircrew of the CH-53 were not injured during the landing and the helicopter has remained at the landing site pending additional assessment, the Navy said.

It was the third incident involving Marine Corps aircraft this week. On Tuesday, four Marines were killed when a CH-53E Super Stallion helicopter crashed in southern California.

The accidents in Djibouti occurred during a major naval exercise being conducted off the coast of the strategic Horn of Africa nation.

The drill is led by Naval Forces Central Command.

For the military, Djibouti is a hub for counterterrorism efforts in the region, including operations in neighboring Somalia and across the Gulf of Aden in Yemen.

McKenzie declined to say what, if any, operational impact the aviation stand-down would have an operations in the region.

There are roughly 4,000 U.S. military personnel in Djibouti, a tiny nation where there are large numbers of international troops. Last year, China opened its first overseas base in the country.

However, there has been a history of complications when it comes to air safety in Djibouti.

In 2015, The Washington Post revealed a host of safety issues and violations by Djiboutian air traffic controllers. In some cases, the controllers reportedly worked under the influence of narcotics, slept on the job and expressed hostility toward the U.S. military mission — in particular, drone operations launched out of Djibouti. In some cases, air traffic control teams even refused to allow military aircraft to land in a timely manner, putting aircraft and personnel at risk, the Post reported.

U.S. officials told Stars and Stripes at the time that issues reported by the Post occurred mainly in 2012 and 2013 and that actions have been taken by the military and top diplomats to improve matters.

Among the measures aimed at reducing risks for U.S. personnel was the establishment of a U.S. manned and operated terminal advisory radar.

“They cannot direct the aircraft, but they provide traffic advisories to U.S. military aircraft when they check in with them,” U.S. Naval Forces Africa said at the time. “In other words, they have the ability to properly advise them on a range of issues before they develop into a potential safety incident.”