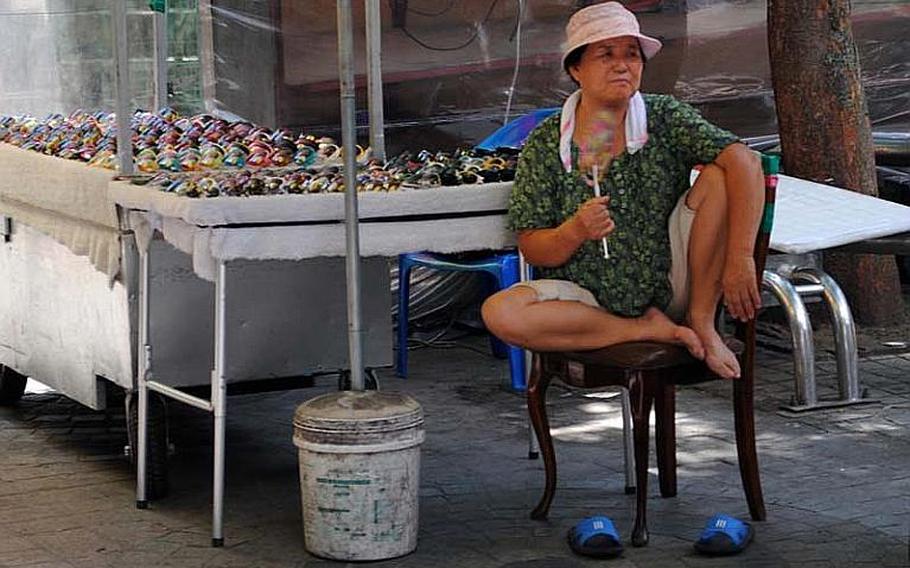 A Korean street vendor fans herself in an attempt to stay cool during a summer heat wave on Aug. 3, 2012. (Armando R. Limon/Stars and Stripes)

A Korean street vendor fans herself in an attempt to stay cool during a summer heat wave on Aug. 3, 2012. (Armando R. Limon/Stars and Stripes) 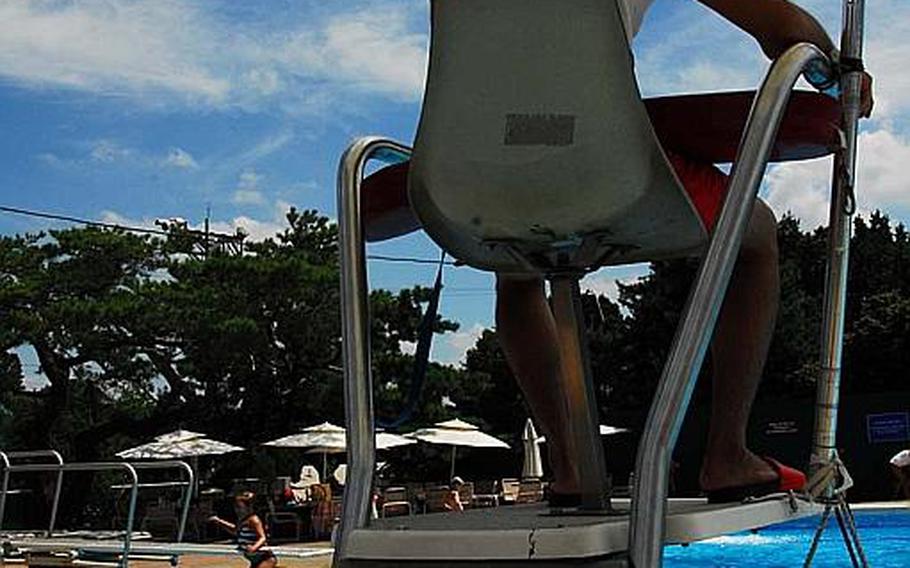 Lifeguard Jeon Na-ra watches as a child jumps off the diving board Aug. 3, 2012, at the U.S. Army Garrison Yongsan outdoor pool. Sweltering temperatures in South Korea drove many to stay indoors or look for ways to cool off, like swimming. (Ashley Rowland/Stars and Stripes) 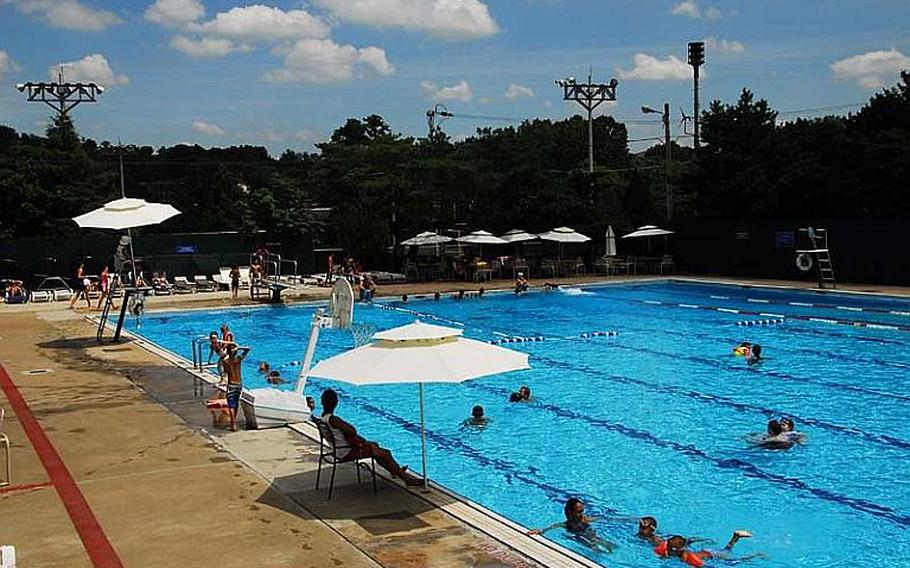 Children and parents beat the midday heat on Aug. 3, 2012, with a swim at U.S. Army Garrison Yongsan outdoor pool. Seoul and most of the country were placed under heat warnings and advisories due to high temperatures. (Ashley Rowland/Stars and Stripes) 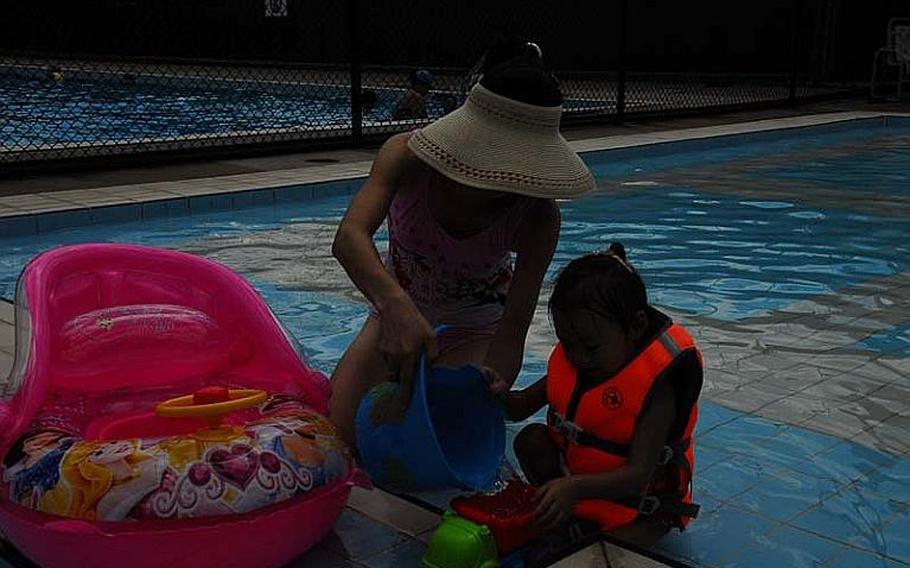 Olivia Kowal, 3, plays in the kiddie pool at U.S. Army Garrison Yongsan as her mother, So Min Kowal, watches. (Ashley Rowland/Stars and Stripes) 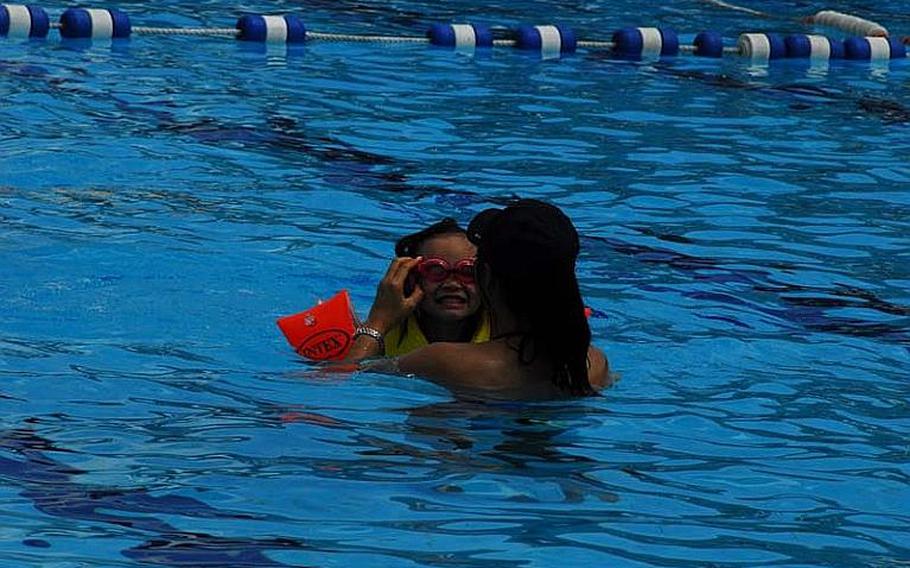 Putsadee Dennis adjusts a pair of googles worn by her 4-year-old daughter Vienna Dennis as they play in the pool at U.S. Army Garrison Yongsan on Aug. 3, 2012. Temperatures in Seoul reached 95 degrees by 4 p.m., the Korea Meteorological Administration said. (Ashley Rowland/Stars and Stripes)

SEOUL &mdash; Other places may register higher on the thermometer, but South Korea&rsquo;s ongoing stretch of sweltering weather is bringing its own brand of misery for American troops and their families.

&ldquo;I used to live in Louisiana, and it wasn&rsquo;t as bad as this,&rdquo; said Phil Sutton, 17, who works as a grocery bagger at the commissary at U.S. Army Garrison Yongsan, where his father is based. &ldquo;Here, it&rsquo;s so humid you can&rsquo;t get away from it without being indoors.&rdquo;

Much of the peninsula remained Friday under a heat wave warning that was expected to stretch at least into early next week, including cities that are home to major U.S. Forces Korea bases: Seoul, Pyeongtaek, Daegu, Dongducheon and Kunsan. A warning is issued when temperatures are expected to reach at least 95 degrees Fahrenheit for two consecutive days. This is the first since Seoul instituted the current warning system four years ago.

At least two South Koreans have died since Monday from heat-related ailments.

Keeping troops healthy remains a top concern for the U.S. military, and officials have curtailed midday activities to avoid the worst of the heat and held briefings to warn troops of heat dangers.

No statistics were available for how many have been treated this summer for heat-related illnesses, but Army Maj. Thuya Aung of the 65th Medical Brigade estimated 50 servicemembers suffer heat injuries during a typical summer in South Korea.

High humidity can make summers on the peninsula as dangerous as the drier but hotter conditions in other climates. For instance, 100 degrees in Arizona might be comparable to 90 in South Korea, Aung said. And a temperature of 85, coupled with humidity of 50 percent or higher, could mean a heat index of more than 95 degrees Fahrenheit &mdash; as well as the U.S. Army&rsquo;s most serious hot weather designation, a &ldquo;Black&rdquo; Heat Category 5.

During a Heat Category 5, one should drink a quart of water and engage in no more than 10 minutes of hard work per hour, according to the U.S. Army Public Health Command.

&ldquo;Your brain is burning, really,&rdquo; said Aung, who suffered a life-threatening heat stroke two months ago during a ruck march in the northern part of the country.

After being hospitalized and undergoing a lengthy recuperation, he has recovered but &ndash; like others with previous heat injuries &ndash; is more susceptible to another one.

Not everyone is complaining &mdash; at least, not too loudly.

Airman 1st Class Thandi Turner, of Osan Air Base&rsquo;s 607th Support Squadron, said the current weather is similar to that of his hometown, Atlanta. While he said the heat hasn&rsquo;t affected his work, that may not be the case for those more accustomed to cooler conditions.

&ldquo;Not many like to get out and be active due to the heat,&rdquo; he said. &ldquo;So it does create a lot of laziness.&rdquo;

Tech Sgt. Jason Baylor is coping fairly well with the heat at Osan after growing up in southern California and spending two tours in Iraq and Afghanistan.

&ldquo;The heat hasn&rsquo;t affected my work at all. You sweat out there and then you go back inside an air-conditioned building,&rdquo; he said.

But that doesn&rsquo;t mean he has no weather concerns &mdash; what he dreads is the upcoming South Korean winter.Stars and Stripes'Yoo Kyong Chang and Armando Limon contributed to this report.