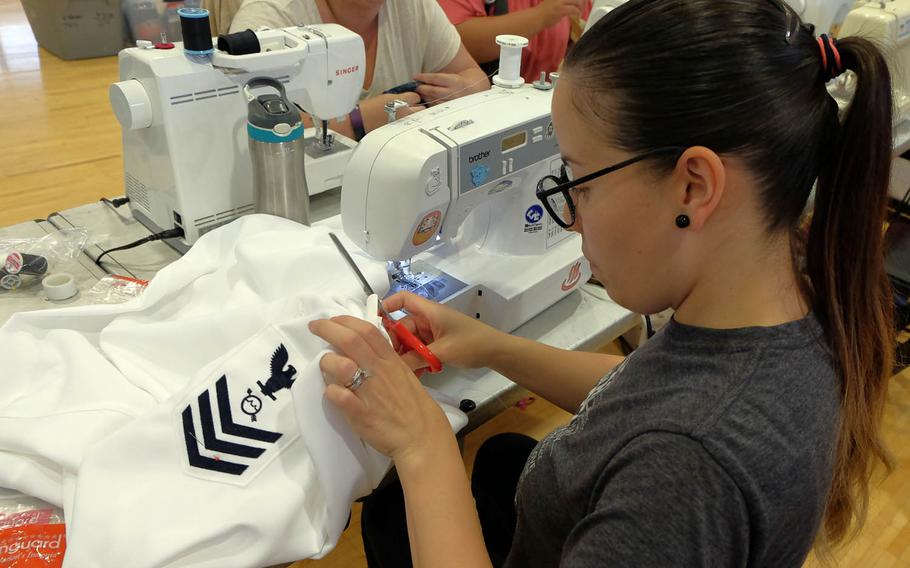 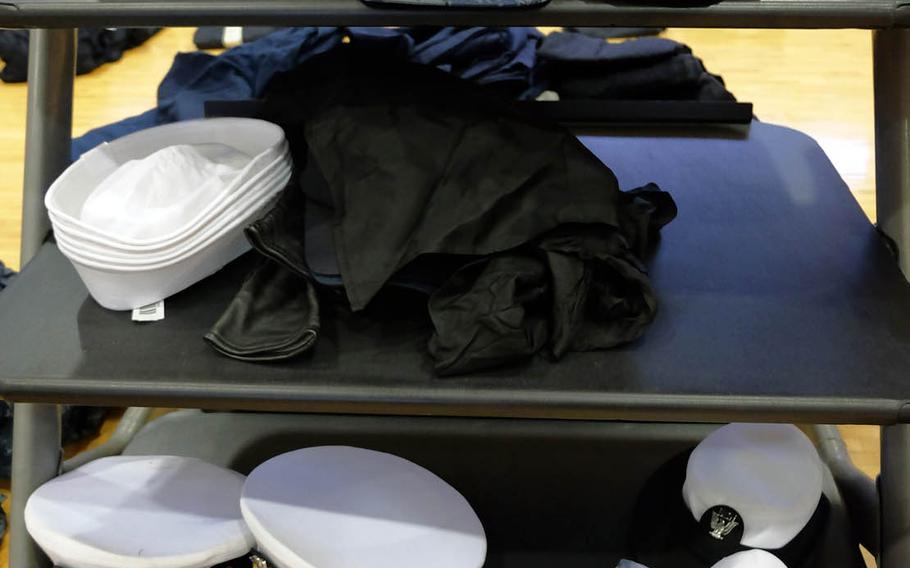 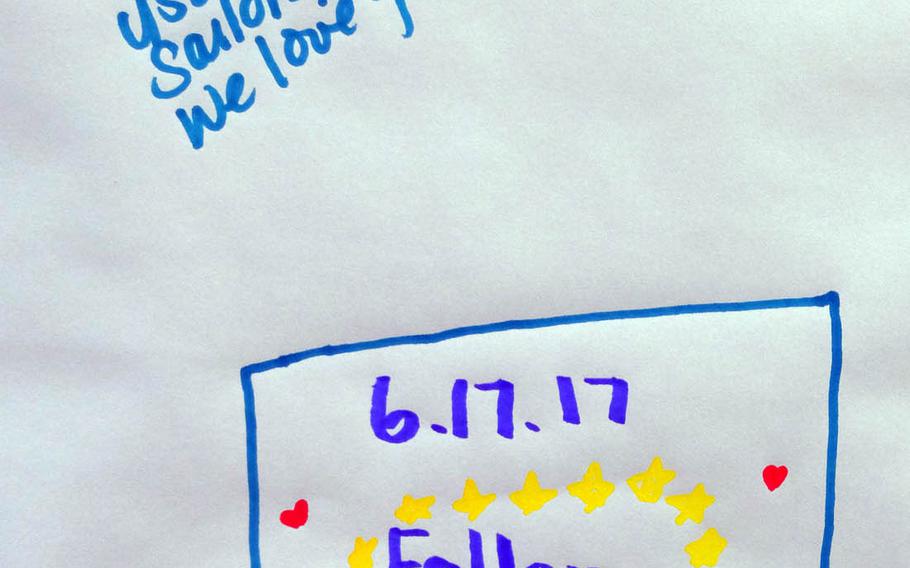 Messages of support left for USS Fitzgerald sailors at the USO branch at Yokosuka Naval Base, Japan, Wednesday, June 21, 2017. (Tyler Hlavac/Stars and Stripes) YOKOSUKA NAVAL BASE, Japan — A number of groups across U.S. bases in Japan have stepped up to assist sailors from the USS Fitzgerald after seven of the ship’s crew members were killed last weekend in a collision off the Japanese coast.

Many of the sailors lost personal items — everything from clothing to debit cards — in the early Saturday incident between the Yokosuka-based destroyer and a Philippine-flagged cargo ship. Some lost everything but the uniforms they were wearing at the time.

The American Red Cross was one of the first groups to respond, meeting the sailors at the pier with comfort kits, said Regional Program Director Amanda Rolsen.

“Once we knew the ship was going to arrive, our volunteers started putting toiletry kits together and canteen items like food, drinks and blankets,” she said. “These guys lost their home. Where the berths were, it was flooded. They lost all of their personal items.”

Supplies arrived from nearby Naval Air Station Atsugi, Camp Zama and Yokota Air Base, said Rolsen, who added that the Red Cross also provided the sailors with gift cards to purchase basic necessities.

Fitzgerald sailors have also been receiving replacement uniforms and civilian clothing from the Yokosuka branch of the Navy-Marine Corps Relief Society. The group, which usually sells used clothing and uniform items at low prices, has been offering Fitzgerald sailors the clothing free of charge.

Volunteer Minte Irmer said the organization has received so many donations of new and used uniform items that it opened a temporary makeshift location out of the base’s Hawk’s Nest to serve Fitzgerald sailors.

“In here we have a makeshift thrift store … although all the items are free for the Fitzgerald sailors who lost everything,” she said. “People have been donating basically nonstop since Sunday morning.”

Irmer said sailors have been primarily seeking uniforms, especially dress uniforms for a memorial that is being planned for next week, as well as utility uniforms for daily wear.

Several volunteers have been offering their sewing skills, completing free, basic alterations, including hemming and stitching nametapes and patches, for the replacement uniforms.

Kraft said the group has been serving hot meals three times a day since Saturday night, and has remained open to provide the sailors with a place to relax, watch movies, access the internet or use Skype to call home.

“We’ve had a wonderful outpouring from the community who provided the drinks, hot meals and the bodies to serve them,” Kraft said. “Our mission is connecting servicemembers to home, and our center has really become a living room this week to come together and feel that connection to home.”

Yokota’s USO office has been taking donations of new or gently used blankets and pillows, as well as monetary donations to help the Yokosuka USO provide 24-hour services.

At Misawa Air Base, the 35th Fighter Wing is hosting donation drives throughout the week in partnership with Naval Air Facility Misawa, said Capt. Samantha Morrison, an Air Force spokeswoman. Many of the component units are holding their own donation drives as well, she said.

The Marine Corps Air Station Iwakuni USO has asked for donations of navy or plain black garment bags or money to buy them for Fitzgerald sailors.

Capt. Matthew Ovios, commander of Sasebo Naval Base, said in a video message that the base USO was accepting uniform donations and that the USO, Red Cross and Navy-Marine Corps Relief Society were also accepting cash donations to help the sailors.

David Robinson, a former Japan District commander for the Veterans of Foreign Wars, said the VFW was spending $3,000 on gift cards for Fitzgerald sailors to replace items lost in the flooding such as computers and uniforms.

Camp Zama’s VFW post has provided sanitary items such as shaving kits and toothbrushes for the sailors, and some individual donors have contributed another $2,000 to buy the sailors new uniforms, he said.

The VFW is working with the Navy at Yokosuka to make sure the help is getting where it’s needed, Robinson said.

“We’re standing by to provide additional assistance where needed and coordinating with the USO and the Navy-Marine Corps Relief Society,” he said.

Stars and Stripes reporters Seth Robson and Leon Cook contributed to this report.