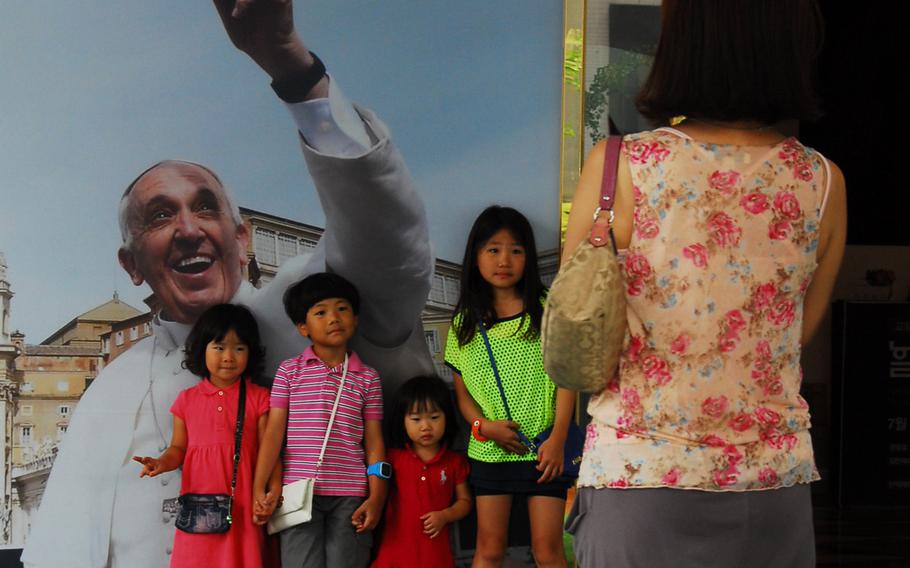 A woman takes a photo of several children in front of a poster of Pope Francis on Thursday in Seoul, South Korea, across from Gwanghwamun Square, where the pontiff will hold Mass on Saturday. (Ashley Rowland/Stars and Stripes)

A woman takes a photo of several children in front of a poster of Pope Francis on Thursday in Seoul, South Korea, across from Gwanghwamun Square, where the pontiff will hold Mass on Saturday. (Ashley Rowland/Stars and Stripes) 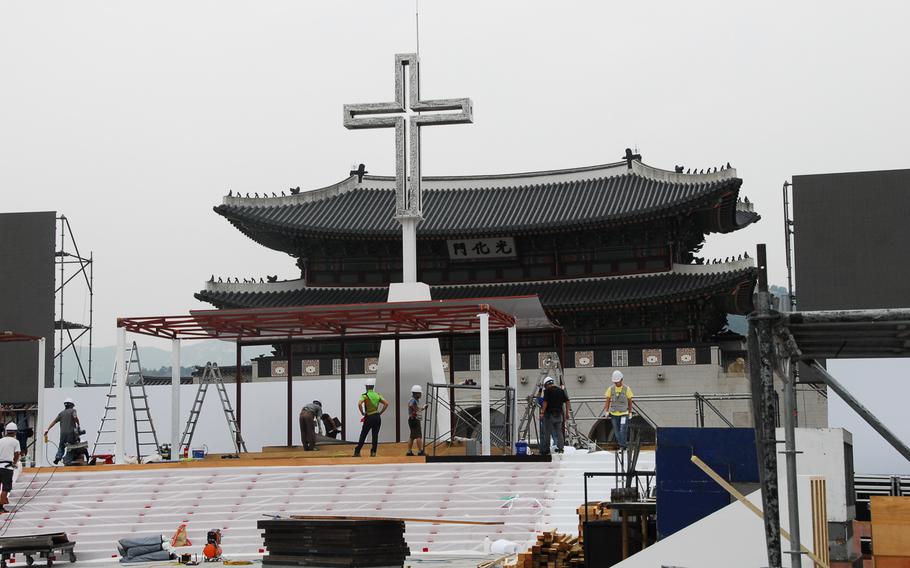 A construction crew builds a stage in Gwanghwamun Square in front of the Gyeongbok Palace where Pope Francis will hold Mass for an estimated crowd of one million on Saturday in Seoul. (Ashley Rowland/Stars and Stripes) 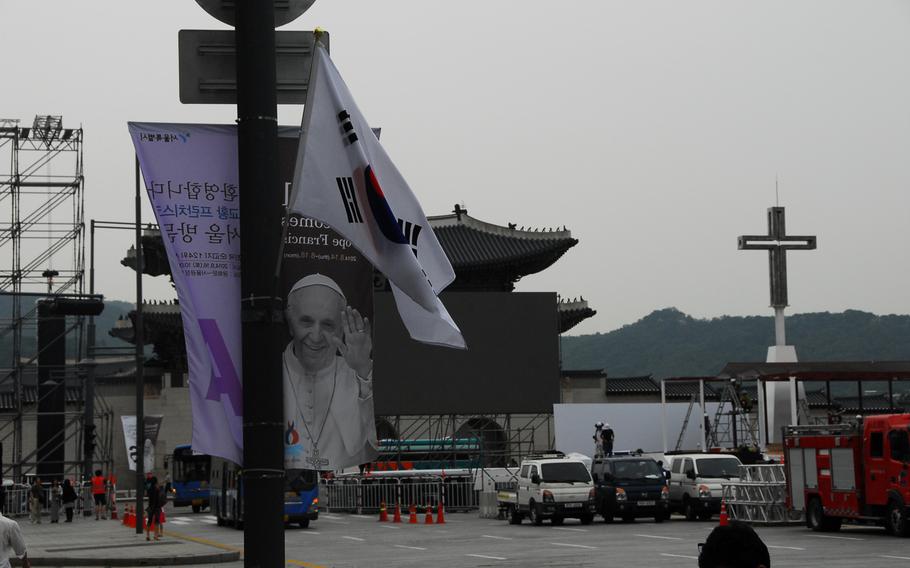 Banners welcoming Pope Francis hung on street posts throughout Gwanghwamun Square on Thursday in preparation of the pontiff's five-day visit to South Korea. The pope arrived in Seoul on Thursday for the first papal visit to the country in 25 years. In the background is the stage where Francis will hold Mass on Saturday. (Ashley Rowland/Stars and Stripes)

SEOUL — Some 300 members of the U.S. military community will attend Pope Francis’ open-air Mass on Saturday, a key event in his five-day visit to South Korea that many hope will promote peace on the bitterly divided peninsula.

Approximately 240 Catholics from U.S. Army Garrison Yongsan and 50 from Osan Air Base, along with five military chaplains, will attend the 10 a.m. Mass at Gwanghwanmun Square in central Seoul.

“This is a special treat for us,” said Col. Austin Coe, Catholic chaplain for Yongsan. Of the 1 million people projected to attend the Mass, only 200,000 — including the Yongsan and Osan members — will be allowed inside a security barricade granting closer access to the pope.

The crowd is expected to stretch from historic Gyeongbok Palace to Seoul City Hall. While most in the audience will be seated on the ground, the U.S. military attendees will have chairs near the altar.

“This is very special consideration in recognition of what we do here on the peninsula,” Coe said.

The pope’s visit comes as the U.S. and South Korea prepare for annual military drills, scheduled to begin Monday, that are viewed by North Korea as preparation for war.

Shortly before Francis’ arrival in Seoul on Thursday morning, North Korea launched three short-range projectiles from Wonsan into the East Sea, officials said. A spokesman for South Korea’s Joint Chiefs of Staff said Pyongyang may have been trying to distract from the pope’s visit. Two more projectiles were fired around noon.

The North earlier rejected a proposal to allow 10 North Korean Catholics to attend a Mass with the pope, according to the Archdiocese of Seoul.

This is the first papal visit in 25 years to South Korea, whose 5.5 million Catholics make up about 11 percent of the country’s population.

Sun Park, acting chief of Osan’s Airman and Family Readiness Center, is helping coordinate military attendance at the upcoming Mass. He said Catholicism holds a special place in South Korea’s history because it was the first foreign religion introduced into the country, and many believers were persecuted.

Francis’ visit is particularly meaningful because of the increased tensions with Pyongyang, he said, and some believe his presence could increase momentum for reunification. Park said he wouldn’t be surprised if the pope makes a surprise trip to Panmunjom or another border town in a push for peace.

Many also are hoping Francis will help draw international attention to the former sex slaves known as “comfort women” who were forced into prostitution during the Japanese occupation of the peninsula that ended in 1945.

Coe said Francis is extremely popular among Catholics “because of his low and humble attitude, and his approach to the marginalized.” He is expected to ride to the Mass in a small Korean-made Kia instead of a more stately vehicle.

Attendees from Yongsan and Osan underwent a rigorous security clearance process that began months ago to get passes to sit inside the barricades. Some who didn’t sign up in time will watch from outside the security zone.

“It’s a huge deal. It’s not something you get to experience every day,” said Staff Sgt. Traci Keller of the 51st Fighter Wing Public Affairs Office, who will leave Osan with two busloads of Catholics at 5 a.m. Saturday to travel to the Mass. “It was definitely one of those things on my bucket list. I didn’t think it would be happen here, of all places.”

Excitement is high among Osan attendees, Park said, because for many, seeing the pope in person is a once-in-a-lifetime event.

“He’s a direct representative of God, as far as Catholics are concerned,” he said.

After landing, the pope attended a welcome ceremony with President Park Geun-hye at the Blue House, the president’s office and residence. His itinerary for the rest of the trip includes celebrating a Mass in Daejeon that will be attended by family members of the Sewol ferry disaster and a meeting with Catholic youth in Dangjin.

Construction crews worked Thursday morning to erect a stage, backed by a cross, in front of the palace for Saturday’s Mass, during which the pope will beatify 124 South Korean Catholic martyrs. Groups of riot police stood guard throughout the plaza, while onlookers snapped photos of banners bearing the pontiff’s picture. A few people walked toward the stage with arms held aloft in worship.