US military braces as Typhoon Mangkhut bears down on Guam 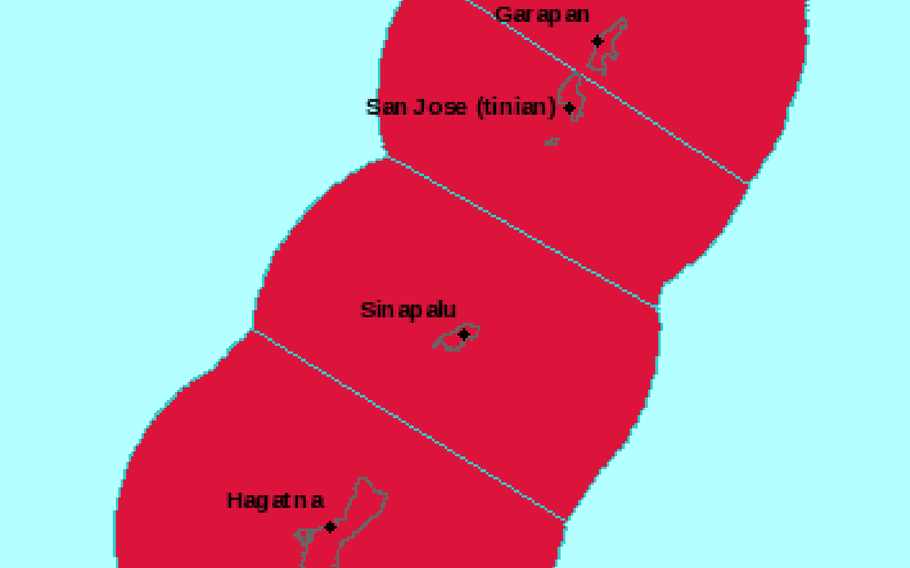 Power outages were already being reported on Guam by Monday afternoon as the island braced for its first near-direct hit from a typhoon in 16 years, officials said. (NOAA)

CAMP FOSTER, Okinawa – Power outages were already being reported on Guam by Monday afternoon as the island braced for its first near-direct hit from a typhoon in 16 years, officials said.

Typhoon Mangkhut was expected to pass about 40 miles north of Andersen Air Force Base and 59 miles north of Hagatna at about 8 p.m., according to the National Weather Service on Guam.

At 4 p.m., Mangkhut was 68 miles northeast of Andersen Air Force Base, moving west at 19 mph. A typhoon warning was in effect for Guam, Rota, Tinian and Saipan, which were all in Condition of Readiness 1. Typhoon-force winds extend 50 miles from center and tropical storm-force winds 180 miles north and 120 miles south, according to the National Weather Service.

U.S. military officials on the island said they had a week to prepare for the typhoon and were ready to not only ride it out, but to assist civilian authorities should any requests come in for disaster relief.

The U.S. military was able to sortie out most ships and military aircraft in anticipation of the storm, McConnaughey said. Most equipment was either brought indoors or lashed down.

The military has been working with Guam Homeland Security and the Office of Civil Defense at a joint information center to make sure people have places to go, shelters were set up and that people knew to stock up on supplies and prepare their yards and homes. They have also been pushing information out on social media.

The U.S. military is ready to support the Federal Emergency Management Agency as well as civilian authorities on Guam and the greater Mariana island region with disaster relief, McConnaughey said. It has numerous military assets at its disposal – from ships and helicopters to National Guard troops.

The Coast Guard also began preparing for the storm over the course of the past week, said USCG Sector Guam spokesman Petty Officer 1st Class Joseph Stoltz. It made sure hazardous waste and oil was safely put out of harm’s way, equipment was stowed or lashed down and that containers at the ports were single stacked unless they were full. Some boats were taken out of the water while others sought safe refuge elsewhere.

“Our search and rescue assets were left in the water until the last possible minute,” Stoltz said, adding that the last 29-foot patrol boat was taken out of commission at about 7:30 a.m. Monday.

The Coast Guard closed the ports of Guam, Rota, Tinian and Saipan to inbound and outbound traffic in the wee hours Monday, Stoltz said.

Mangkhut’s winds are expected to subside Tuesday morning, the Guam Homeland Security/Office of Civil Defense said. Then any recovery work and road safety assessments will begin.