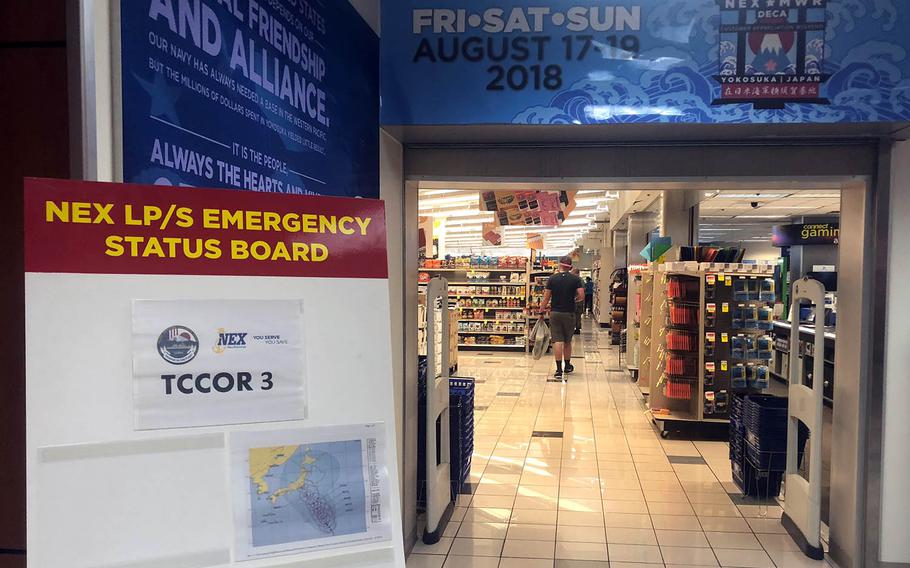 A poster showing the Tropical Cyclone Conditions of Readiness level and the projected path of Typhoon Shanshan greets customers stocking up on storm provisions at Yokosuka Naval Base, Japan, Tuesday, Aug. 7, 2018. (Caitlin Doornbos/Stars and Stripes)

YOKOSUKA NAVY BASE, Japan — U.S. military bases are feeling the first signs of potentially destructive winds and rain as the second typhoon in two weeks barrels toward mainland Japan.

Typhoon Shanshan is projected to pass 92 miles east of Yokosuka and 110 miles east of Naval Air Facility Atsugi, Camp Zama and Yokota Air Base between 2 and 4 a.m. Thursday. Destructive 58 mph winds are forecast to extend between 40 and 46 miles west from the storm’s center.

On Wednesday evening, Kanto-area bases were at a Tropical Cyclone Conditions of Readiness 1 — meaning destructive winds of 50 knots or greater will occur within 12 hours. At Yokosuka, foggy, gray skies gave way to intermittent rainfall and strengthening winds — weather that was foreboding of the coming storm.

During TCCOR-1, the services discontinue outdoor activities “except those in direct support of critical military or civil missions,” according to a document on TCCOR definitions.

Yokosuka Navy Hospital canceled all scheduled appointments after 1 p.m. Wednesday, though said in an online announcement that the emergency room and ambulance services would remain in operation.

At Yokota Air Base, the wing commander delayed reporting for duty until 10 a.m. Thursday, according to a base announcement. The base recommended that residents leave their homes for emergencies only between 3 a.m. and 9 a.m. Thursday.

“All routine appointments that are scheduled before [10 a.m.] will have to be rescheduled,” the base said in the announcement. “The [Urgent Care Clinic] will remain open for urgent care needs.”

“USS Antietam, USS Benfold and USS Stethem got underway [Monday] and USS Ronald Reagan and USS McCampbell got underway [Tuesday],” he said in an email to Stars and Stripes.

Others, including the USS Blue Ridge, USS John S. McCain and USS Shiloh, cannot ship out because they are undergoing maintenance.

“The remaining vessels in port have taken all necessary precautions to ensure the safety of the ships and the crews,” Knight said.

Those precautions include working in coordination with base officials and Yokosuka’s Ship Repair Facility “to ensure that the vessels have extra lines and are securely moored to the pier,” “all loose and moveable items are secured” and “the ships are moved to the piers that offer the most protection,” he added.

Essential personnel are riding out the storm inside the ships at port, and tug boats and pilots will be available throughout the storm should a vessel need help, Knight said.

“Task Force 70 is closely monitoring the track of … Shanshan and will ensure that our units and our personnel have taken every appropriate measure to weather the storm,” he said.

The ships also sortied less than two weeks ago ahead of Typhoon Jongdari, which ended up passing about 110 miles southwest of Yokosuka on July 28, with minimal effects, such as downed tree limbs and blown-away yard items.

In an interview Monday with AFN Tokyo, Yokosuka base commander Capt. Jeffrey Kim said Shanshan is stronger than Jongdari as indicated by the forecast.

“I want everyone in our community to be ready,” he said.

The commissary and Navy Exchange parking lots were full throughout the day with long lines of customers inside piling provisions into their carts until they closed in the afternoon in preparation for the storm.

Yokosuka began canceling community activities, such as its planned National Night Out event, when the TCCOR-3 was issued on Tuesday.