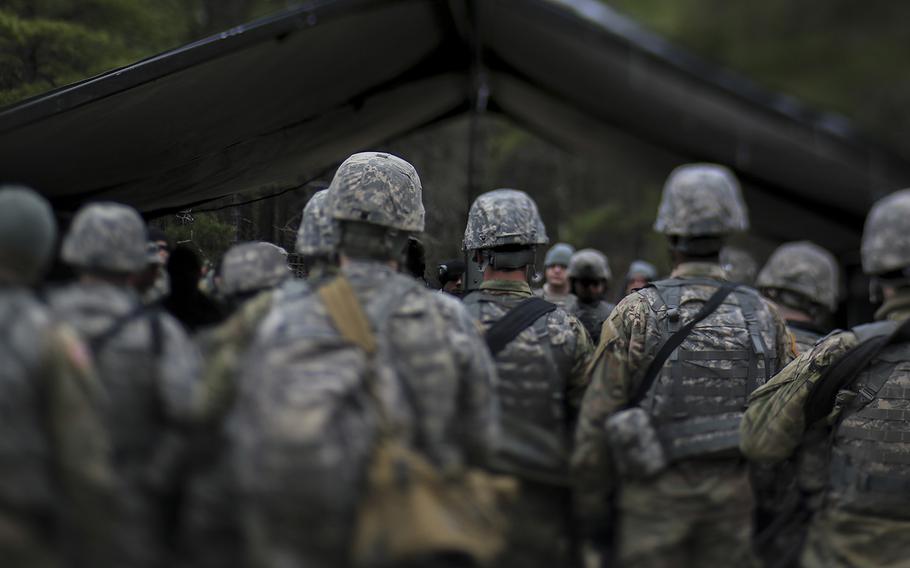 WASHINGTON — As more than 1,600 National Guard troops from three states deploy in the coming weeks to the U.S.-Mexico border to assist with security, preparing a clear plan for their mission remains a challenge.

More so, officials are still grappling with an overall plan for which states will participate and to what extent, in the wake of a White House pronouncement last week to send thousands of troops quickly to the southern border.

The 1,600 troops pledged by the governors of Texas, Arizona and New Mexico to aid in protecting the border is close to the lower end of President Donald Trump’s goal to send 2,000 to 4,000 troops.

But as plans neared the one-week mark since Trump’s directive for states to deploy the troops to the border, much confusion remained. The troops’ mission, the overall states participating, timing considerations and costs still remained largely unclear.

“States are still digesting the proclamation,” said Mark P. Nevitt, a professor at the University of Pennsylvania Law School. “Trump's proclamation to deploy the (National Guard) was not driven by requests from the states for federal funding and support – unlike in 2006 and 2010. This is unique.”

Unlike previous efforts under former Presidents Barack Obama and George W. Bush, a rushed call for the deployments by the White House and reluctance among critics to contribute to the plan has made for a rocky launch.

Under Trump’s April 4 memorandum, state governors are in the driver’s seat on whether to deploy National Guard troops to the border or not. Trump’s request was issued under Title 32 of the U.S. Code, which designates a state-led operation that is federally funded.

Already, Nevada and Oregon have rejected any potential efforts to contribute to the buildup and the key border state of California has yet to sign on.

“As Commander of Oregon’s Guard, I’m deeply troubled by Trump’s plan to militarize our border,” Oregon Gov. Kate Brown, a Democrat, said April 4 in a series of tweets. “There’s been no outreach by the president or federal officials, and I have no intention of allowing Oregon’s Guard troops to be used to distract from his troubles in Washington."

A spokeswoman for Nevada Gov. Brian Sandoval, a Republican, said the effort wasn’t considered an “appropriate mission,” after consulting with Brig. Gen. William R. Burks, the adjutant general of the Nevada National Guard.

This, as Democratic California Gov. Jerry Brown, a staunch opponent to Trump’s immigration policies, has yet to issue support for the plan.

So far, the Pentagon has offered some brief details on the operation, saying the troops would provide air support, road and infrastructure maintenance and help operate surveillance systems. The troops will not be conducting arrests, however.

And while state opposition could help slow the overall effort, it won’t halt it, said Mark Cancian, a senior adviser at Washington think tank Center for Strategic and International Studies.

Past deployments provide a guide The same effort trigged by Trump last week has been used in recent years by former presidents. In 2006, more than 6,000 National Guard members were deployed in support roles to the southern border under Bush, while 1,200 were dispatched under Obama in 2010.

Today, participating states are now scrambling to replicate the effort.

“Each state (National Guard) bureau will work with the federal government” to the scope of the activity, Nevitt said. “But as command and control resides with the state governor, they can limit and define their participation. Those negotiations are likely occurring now.”

The funding will likely come from the personnel budget for the National Guard, which for fiscal year 2018 is about $12 billion, said Andrew Sherbo, a University of Denver finance professor who has tracked government and defense budget issues.

Travel and per diem costs would be pulled from the operations and maintenance budget for the Guard, which is about $14 billion this year, he added.

“The Guard may simply be doing training on the border,” so that could mean marginal personnel costs, Sherbo noted.

For now, it appears Texas, Arizona and New Mexico will deploy the largest share of troops.

Texas, which is leading the charge, deployed 250 troops Friday and plans to deploy 300 troops weekly until more than 1,000 are stationed at the U.S.-Mexico border, Gov. Greg Abbott said.

"Texas is preparing to increase our National Guard presence to more than 1,000 along our southern border," Abbott said Tuesday in a statement.

The first wave of 250 Texas-deployed troops began planning for follow-on forces and a wave of 300 troops will report this week to armories for required processing and training before being equipped for the mission, according to the Texas Military Department, which is the military arm for the Lone Star state.

These troops will provide support that will free up Border Patrol agents by assisting with surveillance, operating detection systems, providing mobile communications, assisting with border-related intelligence and providing aviation assets, transportation, training and other missions, the state’s military department said.

Arizona officials said 250 troops were deployed Monday followed by another 113 Tuesday for a total of 338. The Guard members will provide support to federal, state, county, tribal and local law enforcement agencies to stop illicit activity such as the flow trafficked people, criminals, narcotics, weapons and ammunition, according to the Arizona Department of Emergency and Military Affairs.

“I am grateful for this administration’s actions to address border security,” Gov. Doug Ducey said Monday in an opinion piece for USAToday. “But with a border nearly 373 miles — longer than the entire length of Pennsylvania — we can’t do this on our own.”

New Mexico, meanwhile, said it will deploy 80 National Guard members later this week, and eventually reach 250 for the state’s operations.

“We are proud of our soldiers and the work they continually do in order to keep New Mexico safe,” Gov. Susana Martinez’s office said in a statement.

Critics to the plan have accused Trump of using the National Guard as part of a political move, especially in light of Department of Homeland Security data showing arrests for illegal border crossings had reached a 46-year low by December. White House officials, along with other supporters such as Texas Gov. Abbott, have since said they expect those figures to tick up dramatically this spring.

Trump has said the military would be deployed until a border wall is built – one of the president’s central campaign promises.

Wall proposal using the military It remains to be seen whether the Defense Department can fund or take part in the building of a wall along the southern border, an effort promoted by Trump recently.

For now, the lack of clarity might have administration lawyers busy researching the effort, said one expert.

“I’m sure the lawyers are pouring through all the appropriations law to see if there is some loophole,” Cancian said.

Offhand, there are pieces of the border near military bases, and it’s possible a fence could be built or replaced there, he said.

However, “I’m sure they have a pretty good fence already” in those cases, Cancian added.

Sherbo, the finance professor, said the National Guard won’t be used to build the wall.

“That is a big misconception,” he said. “They are deployed to provide security until funding for the wall of $25 billion is approved and construction completed. The $25 billion would be in the Department of Homeland Security budget.”

The debate has set off varying approaches on Capitol Hill to head off such an effort.

But Rep. Ruben Gallego, D-Ariz., a Marine veteran irked by Trump’s efforts to build the wall filed legislation last year to thwart such a move to use Pentagon funds.

Gallego argued it is legally plausible for Trump to use military funds for the wall, which is why he filed the legislation last year and plans to re-file this year.

“I saw that the movement for the border wall was being stalled out in Congress just not because of Democrats but Republicans [too],” Gallego said last week, referring to why he proposed the plan last year. “I know this president is very petty and small” and would go after military funds.

Stars and Stripes reporter Dianna Cahn contributed to this report