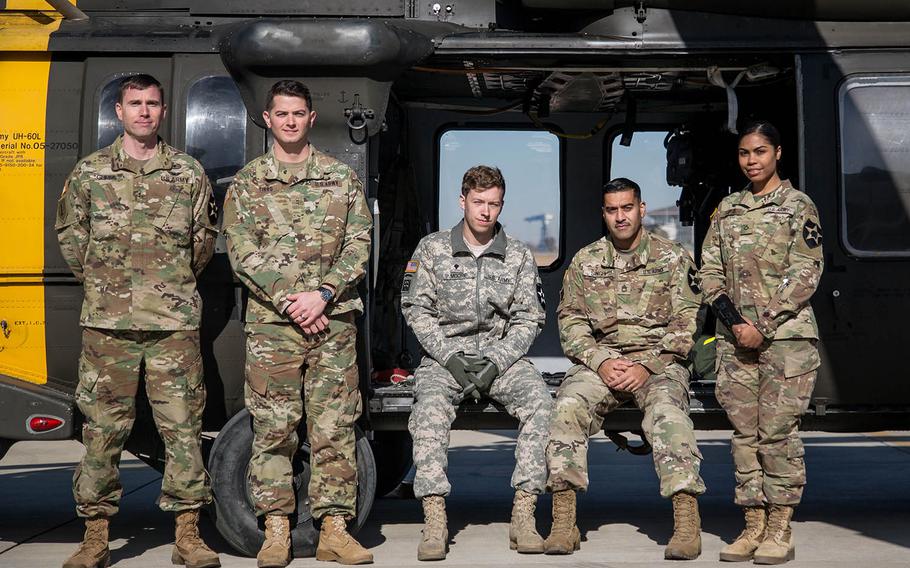 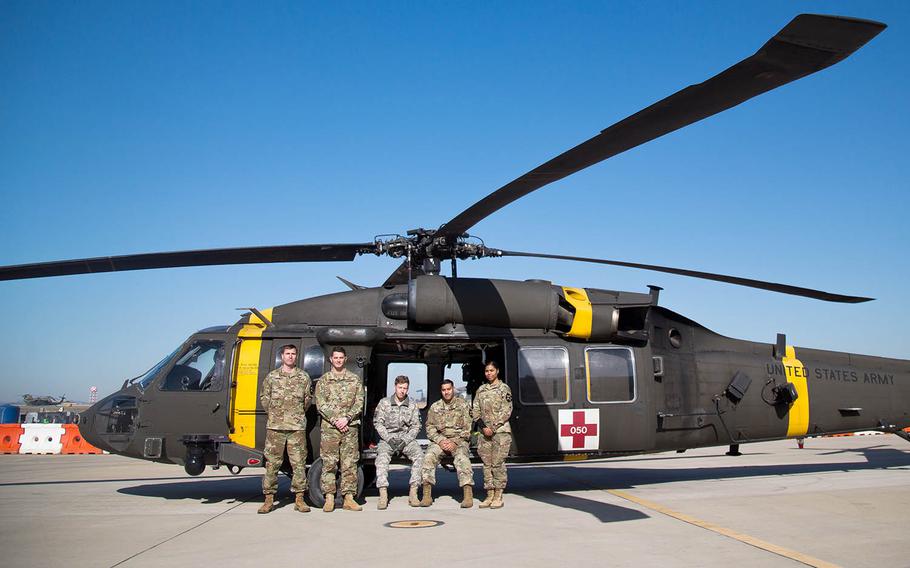 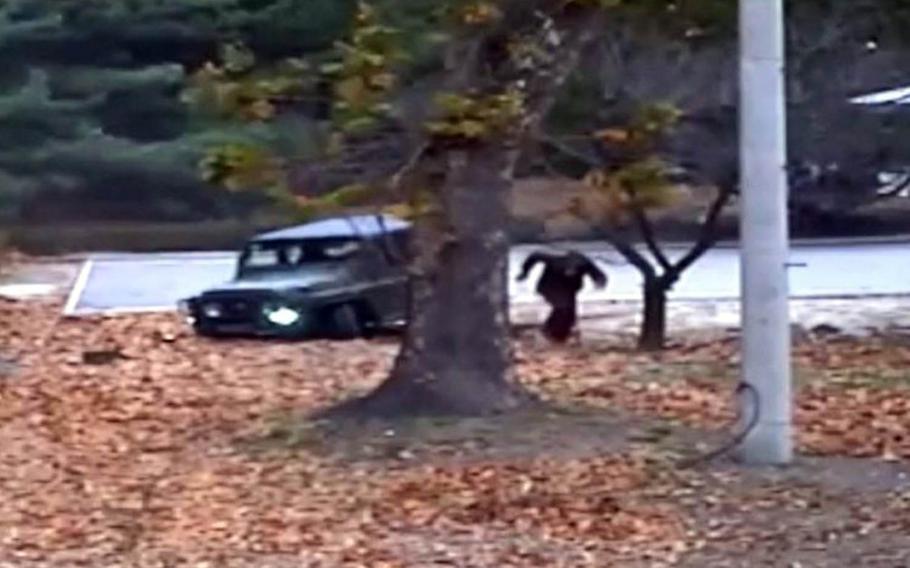 A North Korean soldier runs toward the Military Demarcation Line while defecting at the Joint Security Area of the Demilitarized Zone, Nov. 13, 2017. (Screenshot from U.N. Command) 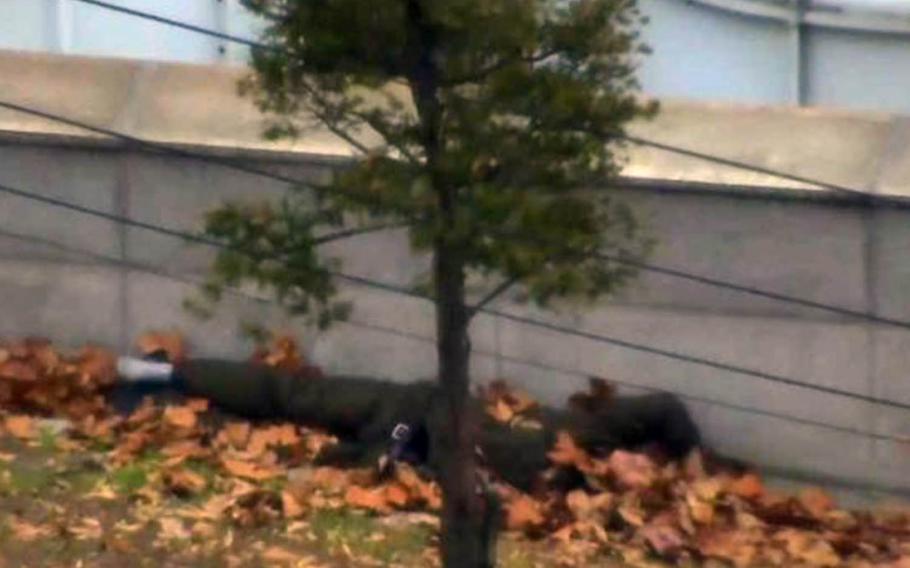 A North Korean defector, injured from multiple gunshot wounds, lies under a pile of leaves in the truce village of Panjumon, Nov. 13, 2017. (Screenshot from U.N. Command)

SEOUL, South Korea — The U.S. medic who treated a North Korean defector shot several times while fleeing across the border didn’t think the man would survive the flight to the hospital, he said Thursday.

Sgt. 1st Class Gopal Singh was part of the four-member military medevac crew that flew the North Korean soldier in a helicopter from the jointly patrolled area in the Demilitarized Zone to a hospital south of Seoul.

Singh recalled that he was so worried that he said a prayer for the wounded man before they began the 22-minute flight at a speed of about 160 mph.

“I remember thinking this guy is probably going to die in the next 15 minutes,” he told Stars and Stripes in an interview at a hangar on Camp Humphreys. The flight was expected to take at least 20.

The 2nd Combat Aviation Brigade medevac crew didn’t know they were carrying a North Korean defector — who was no longer in uniform — until after they returned home, although Singh had his suspicions after noticing how malnourished the man was.

The defector, who has been identified only as a 24-year-old with the last name of Oh, was severely wounded by gunfire during his Nov. 13 escape. He drove a military jeep as far as he could, then ran across the border in the only area where troops from the two countries face each other.

He collapsed after being shot at least five times by his former comrades who gave chase while firing automatic rifles and handguns, which the United Nations Command has said violated the armistice that ended the 1950-53 Korean War.

South Korean soldiers from the UNC security battalion dragged him to safety. American medics with the battalion did their best to bandage him up while rushing him to a nearby field where the medevac team was waiting.

“They did a really good job of treating him on the ground,” said the pilot, Chief Warrant Officer 2 Nathan Gumm. “But I heard the medic’s voice. You know it’s bad based on how he said it. He’s always so cool and calm. Now he was like ‘this is serious. This guy’s dying.’”

The South Korean trauma surgeon in charge of the defector’s case, Lee Cook-jong, has become a local celebrity by providing televised updates about the patient, whose condition has improved enough that he was moved out of the intensive care unit to a general room at Ajou University Hospital.

But the quick actions of the American medics on the ground and in the air were critical in keeping the North Korean soldier alive until he got there, officials said.

Kim Jiyoung, a trauma program manager at the hospital, said the medevac team did everything just right according to the so-called golden hour principle — the period after an injury in which prompt medical treatment is crucial in preventing death.

“Moreover, they got him to the hospital quickly,” she said in a telephone interview. “A lengthy patient evacuation can cause death to any patient bleeding so much even if someone performs good first aid.”

The crew had just returned to Camp Casey, a base near the heavily fortified frontier that divides the peninsula, after a more than three-hour training mission when radio operator Pfc. Karina Lopez told them to stand by for a real mission.

After initial confusion about whether the team was needed, Lopez got the call at 4:04 p.m., about an hour after events had begun to unfold, and the team took off five minutes later.

“That’s when I started ... calling the hospital, trying to figure out which hospital they were going to take him to,” said the 20-year-old from Raleigh, N.C.

Singh and his teammates had only basic information that somebody had suffered a gunshot wound to the torso at the Joint Security Area. But that was enough for concern.

“I was in Iraq and Afghanistan … that’s what you expect there,” said Gumm, the 37-year-old pilot. “Here you’d expect a concussion or the other types of missions that we’ve had, not a gunshot wound to the torso. So it was surprising.”

It took about seven minutes to get to Camp Bonifas, the base near the JSA, where more than a dozen people met them carrying the wounded soldier on a stretcher in a chaotic scene.

“We had to kick some people out of the helicopter,” said crew chief Spc. Carroll Moore, 25, of Lenoir, N.C., adding there was only room for two escorts from the security battalion.

Singh, 39, of San Antonio, said he immediately spotted signs that a lung was in danger of collapsing so he did a needle chest decompression, with a 3.5-inch needle. He also worked to stop the blood from hemorrhaging.

The defector, who was in and out of consciousness, asked for water at one point, but Singh said he couldn’t have any because of the nature of his wounds.

As Singh treated the patient in the back, the pilots pushed the Black Hawk as fast as they could. The original plan was to travel at about 138 mph but they decided they could increase the speed to about 160.

“That was the absolute maximum that we could do,” said Chief Warrant Officer 2 Eric Tirro, the co-pilot. He said he was doing his best to ignore what was going on in the back to avoid being distracted, but he couldn’t help hearing screams, which turned out to be efforts to keep the patient awake.

“A helicopter is pretty loud so when you hear screaming over that noise you know that something serious is happening,” he said.

The crew also was worried about the weather because rain was in the forecast, but fortunately it didn’t start falling until after the mission was complete.

“Thirty minutes more and we probably wouldn’t have been able to do it,” Moore said.

The helicopter landed on a helipad between two buildings at the hospital in Suwon, south of Seoul.

Gumm, of Winfield, West Va., said the hospital is a familiar destination for the crew, which is assigned to the 2nd Infantry Division’s 3rd Battalion, 2nd Aviation Regiment, General Support Aviation Battalion.

“The pad is right there in the middle,” he said. “They block the traffic and they come running out there. It’s impressive. It’s what you would see in a movie.”

Tirro, 30, from Annapolis, Md., said the crew had flown to the JSA a couple of days earlier as part of its training. “I remember thinking at that time, well, I’ll never fly up here again, so little did I know.”

The unit conducted 45 medevacs from February 2016 to February 2017, including 19 north of Seoul, 26 to the south of the capital and one overwater to the northwest islands. But members said the missions usually involve noncombat emergencies such as appendicitis or vehicle accidents.

Singh, a combat medic who did another stint in South Korea in 2011-12 and served in Iraq in 2007, said he was relieved when the patient made it through the flight. He called it “the longest 22 minutes of my life.”

“It’s truly a miracle. He was fighting all the way,” Singh said, adding he would like to meet the defector someday. “But just knowing that he’s OK, that’s a pretty good reward.”