US marks closer ties with Myanmar, but China's influence lingers 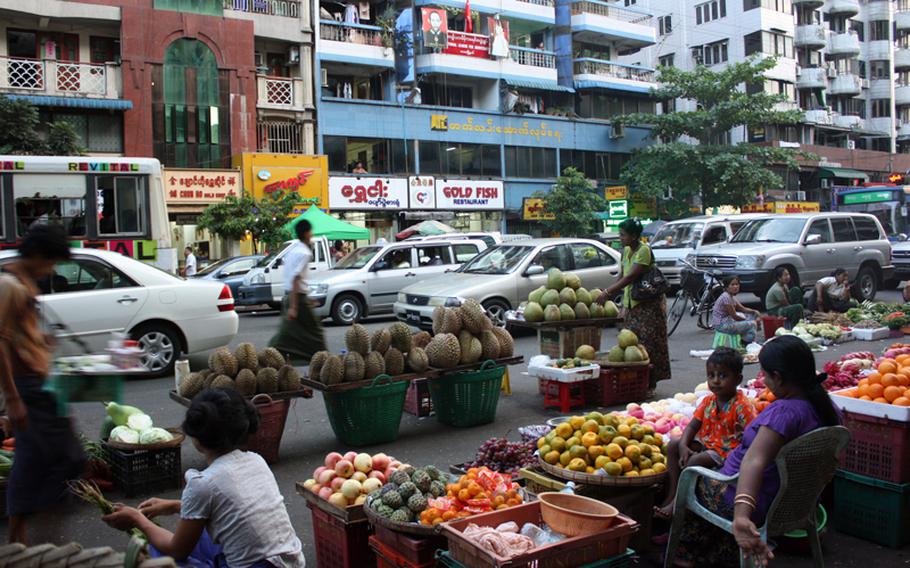 Street life is pictured on Maha Bandoola Road in Chinatown in Yangon, Myanmar, October 12, 2012. Yangon, home to four million of the country's 55 million people, doesn't feel like the massive urban centers that dot Asia such as neighboring Bangkok or Mumbai. (Rolf Zimmermann/DPA/Zuma Press/MCT)

In the early 1990s, the United States, European Union and other countries instituted economic sanctions on Myanmar, also called Burma, after the controlling military junta brutally cracked down on political demonstrations. As recently as 2005, Secretary of State Condoleezza Rice lumped the country in with the likes of North Korea, Iran and Cuba as “outposts of tyranny.”

The sanctions drove Myanmar closer to China, which seemed to have little compunction about military, political and economic engagement with its neighbor to the south.

However, with Myanmar’s embrace of democratic reforms during the past two years, the U.S. has quickly warmed to the country.

Meanwhile, China has lost its once solid footing in Myanmar, pulling back on investments there — particularly after Myanmar President Thein Sein suspended China’s massive Myitsone dam project in the northern state of Kachin in September 2011.

And with President Barack Obama welcoming the first Myanmar president to the White House in almost 47 years, the U.S. seems poised to at least loosen China's influence on the country.

“It is strategically situated below China, between the emerging mega-nations of Asia — India and China,” Nitze said. “If Myanmar were to become a full-fledge client state of China, this would change the regional strategic balance.”

“The Obama administration practically from day one has made re-engagement with Asia one of its top priorities,” said Ian Storey, a senior fellow at the Institute of Southeast Asian Studies in Singapore. Essential to that was strengthening ties with the 10 members of the Association of Southeast Asian Nations: Indonesia, Malaysia, Philippines, Singapore, Thailand, Brunei, Cambodia, Laos, Vietnam and Myanmar, which is slated to chair the organization in 2014.

Thus, the now-improved relationship with Myanmar has strengthened the Obama administration’s overall policy of pivoting, or rebalancing, military forces to Asia by more closely aligning the U.S. with ASEAN.

“The rebalancing is not just about military force, though,” Storey said. “It’s about promoting and growing America’s economic interests in Southeast Asia, including Burma.”

Myanmar is rich in natural resources, such as teak, gems, coal and copper. It reportedly has proven gas reserves on- and off-shore of roughly 12 trillion cubic feet.

The Obama administration can also point to Myanmar as its policy success story in East Asia – particularly since it’s made so little headway with North Korea. In fact, the administration now sees Myanmar as playing a role in dealing with the North Korea dilemma. In September, a senior State Department official told reporters that Secretary of State Hillary Clinton had advised Sein that the country “seriously should cut off any kind of military relationship with North Korea.”

The U.S. has taken steps to bring Myanmar closer into the fold.

The U.S. Agency for International Development re-established a mission in the country in the fall. President Barack Obama visited the country soon after that and promised $170 million in aid over the next two years if the country continues its reforms.

“In the past China had all the leverage against Myanmar because of its international isolation, but now Myanmar has found viable alternatives to China while China’s interests are already deeply entrenched in Myanmar,” wrote Yun Sun, a visiting scholar with the John Thornton China Center at the Brookings Institution in Washington D.C., last year in the Journal of Current Southeast Asia Affairs. “The most immediate impact over China’s strategic interests is that Myanmar is no longer seen as a reliable, loyal ally to advance China’s regional and strategic agenda.”

Historically, Myanmar worked to balance its relationship with China and India, but after the controlling junta refused to accept the results of free elections in 1990, the country faced international condemnation, said Storey.

During the next 20 years China became Myanmar’s largest foreign investor, while the U.S. remained on the sidelines.

China also regularly “went to bat” for Myanmar as a member of the U.N. Security Council when further sanctions were proposed because of the country’s poor human-rights record, Storey said.

But major projects by China, such as the Myitsone hydroelectric dam, have led to public resentment of China — while America is viewed in increasingly positive terms.

In the northern states of Kachin and Shan, where civil war has simmered for decades between ethnic Kachins and the Burmese army, many there hope that the U.S. will intervene. Largely Christian, Kachins feel an affinity toward the U.S., which fought side-by-side with them during World War II against the Japanese-created Burma National Army.

China had been moving toward greater military cooperation with Myanmar, which “seemingly was rooted in its strategic interest in access to the Bay of Bengal, in the context of Beijing’s apparent longer-term objective to develop a naval presence in the Indian Ocean,” wrote Dr. Jurgen Haacke, with the Asian Research Centre at the London School of Economics and Political Science.

That has cooled. Discussions about using Myanmar for access into the Indian Ocean and for naval cooperation have “become largely silent,” wrote Sun.

That doesn’t mean, however, that U.S.-Myanmar military cooperation will surge. At present U.S. firms can’t invest in any entity owned or operated by Myanmar’s armed forces, Storey said. Arms sales to the country also remain banned.

The two militaries can interact in a humanitarian capacity, such as when the U.S. military delivered relief supplies to the country after Cyclone Nargis in 2008.

Humanitarian efforts also include the search for the remains of missing servicemembers from World War II by the Joint POW/MIA Accounting Command, which is now back in Myanmar after a decade absence.

“I think JPAC’s return to Burma is extremely important because if you look at the establishment of military-to-military links in Vietnam, it was JPAC that laid the foundation for that,” Storey said. “The U.S. and Vietnam have been able to build on that.”

Regular interactions between the two militaries “will help forge professional relationships and foster habits of cooperation which will be invaluable in helping the two armed forces understand each other better,” Storey wrote in a recent journal article.

Still, for all the improved relations between the U.S. and Myanmar, China is “still sitting pretty in Burma,” Storey said. “It still has vast interests. Any Burmese government by virtue of geography will have to maintain good relations with China.”