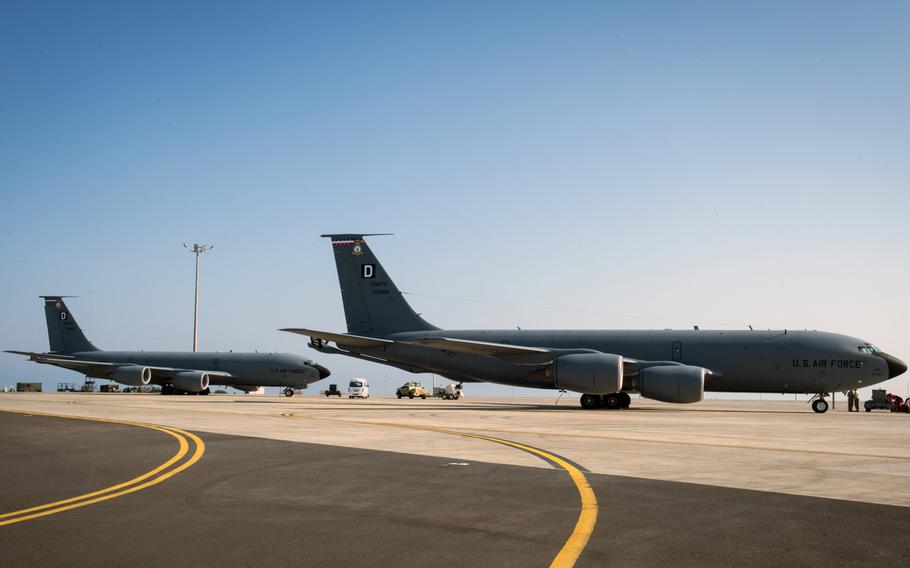 Two KC-135 Stratotankers sit on the runway at Camp Lemonnier, Djibouti, before a mission, Dec. 6, 2016. U.S. military aircraft flying over Djibouti are being targeted by high-powered lasers launched from an area near China's military base in the east African country, according to the Federal Aviation Agency. (1st Combat Camera Squadron)

The United States lodged a formal complaint to China, asking the country to investigate repeated instances in which American military aircraft were targeted by high-powered lasers near a Chinese military base in Djibouti, the Pentagon said Thursday.

The United States is confident the Chinese are involved in the incidents, said Dana White, Pentagon spokeswoman. The lasers were described as “military grade” and White said between two and 10 incidents have occurred recently.

“They are very serious incidents,” she told reporters at the Pentagon on Thursday. “There have been two minor injuries. This activity poses a true threat to our airmen.”

Another Pentagon spokeswoman, Army Maj. Sheryll Klinkel, said those injuries were to a pair of American pilots flying a C-130 turboprop transport, who were exposed to the laser beam during a recent flight.

FAA coordinates for the origin of the laser attacks reveal a location in the sea 750 meters from China’s base, Jane’s Defense reported.

On Thursday, the FAA issued a warning advising military aircraft to exercise “extreme caution” when transiting the area. The FAA has issued repeated warnings since April 14 to pilots in the area.

The malicious use of lasers to flash-blind pilots has been a worldwide problem over the past two decades. Incidents of laser interference generally involve people directing lasers at aircraft on takeoff or on the final landing approach, the most critical phases of flight. In some cases, pilots flying the aircraft have been forced to hand the controls over to their co-pilots after having their vision temporarily impaired.

In 2017, China opened its first overseas base in Djibouti, a tiny but strategically important Horn of Africa country. The Chinese base is close to Camp Lemonnier, a hub for American missions in the region.

During the past decade, China has become a major economic presence in Africa, but Djibouti is Beijing’s first military foothold on the continent.

“U.S. Africa Command views security and access to Djibouti as a top priority. Consequently, we continue to monitor this development to ensure U.S. interests are not deterred,” Waldhauser said during congressional testimony in March.

AFRICOM’s strategy in Africa is now taking a larger account of China as “the strategic environment becomes more crowded and competitive,” Waldhauser said.