US linguists could face jail over contractor disagreement 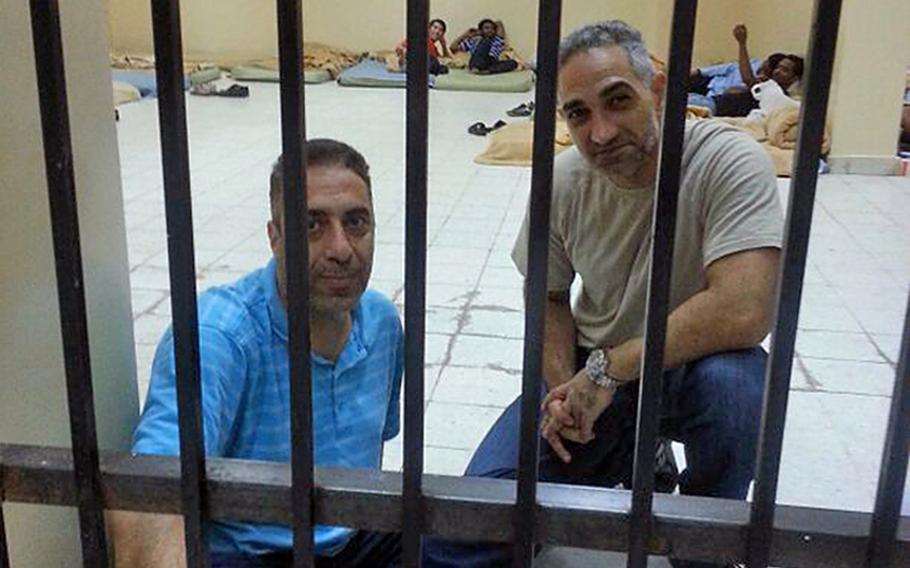 Arabic linguists Maher Al Masri, left, and Ramzi Zinnekah wait inside a Kuwaiti jail cell in a photo Zinnekah said was taken by a guard. The two men, U.S. civilians employed by defense contractor Global Linguist Solutions, were detained by local authorities in late May and deported to the U.S. as part of a dispute between GLS and the Kuwaiti company it hired to manage its employees. Both are now back at their homes in the States. (Courtesy Ramzi Zinnekah)

A U.S. defense contractor has barred its employees from leaving Army posts in Kuwait after local police issued arrest warrants for the group, a bizarre turn in a monthslong dispute between the company and a Kuwaiti subcontractor.

Nearly 100 American civilians working as Arabic linguists on camps Buehring and Arifjan, two major Army bases in the Middle East, say that since May 31 they’ve been unable to leave either post for medical appointments, personal time or even emergency matters.

All are at risk of being deported by Kuwaiti police, who have no authority inside base gates. The deportation threat stems from a legal dispute between their employer, U.S.-based defense contractor Global Linguist Solutions, and the Kuwaiti company it hired to manage its employees locally.

Before the ban, as many as nine linguists were detained outside the gates, held in Kuwaiti cells and flown back to the U.S., according to linguists interviewed and their employer.

Both the State Department and the Army say they are powerless to move the linguists out of the country or prevent arrests.

“It comes back to us being fugitives,” said one linguist reached at Camp Buehring, who agreed to speak on condition of anonymity. “That’s our status in the state of Kuwait.”

Kuwaiti law requires all foreign workers be placed on the rolls of a local firm, or “sponsor,” which applies for working visas on behalf of employees and manages some aspects of payroll.

The actual employer is required to hire the services of the local firm.

Global Linguist Solutions re-bid its sponsorship contract earlier this year, selecting a new Kuwaiti company instead of the one it previously worked through, Al Shora International General Trading & Contracting company.

GLS and Al Shora dispute what happened next. Al Shora claims linguists canceled their residency under the company. It charges GLS with using Al Shora to remain legal in the country while trying to transfer linguists to the new sponsor.

GLS says it was eager to move employees off Al Shora rolls but was repeatedly rebuffed by Al Shora. The company has accused Al Shora of lashing out after failing to win the new contract.

In March, Al Shora turned over the names of GLS employees to Kuwaiti authorities and declared them absent from work and in violation of their working visas. Curbing immigration violations is a preoccupation in Kuwait, where foreigners account for nearly half the population, many working in the service industry.

After the Army initially forced linguists to stop work on the post in March, GLS lawyers were able to get them working again weeks later through negotiations with Kuwaiti ministries, according to company President Charles Tolleson. He said he had a plan to move the linguists to the new sponsor in the following weeks.

Instead, employees’ names began to return to Kuwait’s so-called “blacklist” for deportation, a move Tolleson blames on Al Shora’s connections.

“My linguists were being charged as runaways and absconders, which is ridiculous because they live and work on the post,” he said.

Police detained Majdi Abdulghani on May 9 as he prepared to board a flight for an approved trip to Jordan to visit his ailing mother. A former linguist in Iraq, he spent seven days in jail before he was flown to the U.S.

“I tried to explain to them I don’t work for the sponsor company, I work for GLS, the American company,” he said.

Ramzi Zinnekah, a former Navy Riverine, was stopped with another linguist at a checkpoint outside the base on May 30. The two spent seven days in what Zinnekah described as a crowded, filthy jail.

“Nothing in there is cleaned, ever,” he said. “You’re using mattresses that 100 people used before you, blankets that you don’t want to even think about.”

In late May, Al Shora published an ad in a local newspaper warning residents from employing or sheltering the Americans, who were wanted for “avoiding contact” with the company, according to a copy and translation provided by the linguists.

On May 31, days after GLS notified linguists that all of them potentially face deportation, it ordered employees to remain on base unless authorized by managers to leave. The Army told linguists it couldn’t prevent the arrests.

“The U.S. Army cannot protect you from the Kuwaiti government off post,” stated an email sent to linguists by a noncommissioned officer with one unit and obtained by Stars and Stripes. “Even if your battalion is willing to provide you with an escort, ask yourself what actions can they reasonably take against the local law enforcement apparatus?”

A spokesman for the State Department called the situation a legal dispute between two companies, and said it couldn’t intervene. The Army’s Intelligence and Security Command, which oversees the linguist contract, also said the matter was between GLS and Al Shora due to the private nature of the dispute.

The linguists on the bases say they are still being paid, but are no longer working after the military suspended use of their services in light of the dispute. Several who spoke on condition of anonymity said they felt caught in the middle of a disagreement they knew little about, and all said they feared arrest.

“The main issue is our safety in this country and our safe return home,” one contractor said.

Abdulghani and Zinnekah, both now in the U.S., say GLS has placed them on leave without pay.

Tolleson said the company’s contract requires them to stay that way until they return to theater, a process he said he’s working on.

He said rumors among the linguists that they will not be allowed to re-enter the country are untrue and that he’s already returned five of the deported linguists to the country under the new sponsor. Tolleson hopes to transfer the remaining linguists by continuing to work with Kuwaiti ministries and by pressuring the State Department and the Army to intervene. He said he’s hired no new linguists to replace those who aren’t working.

Reham Aljelewi, the owner of Al Shora, said in a Tuesday interview that she no longer wanted to work with GLS. The American company had filed complaints against Al Shora to several Kuwaiti ministries. She said the complaints were based on false allegations.

A spokesman for the Army’s Intelligence and Security Command, which oversees the linguist contract, said federal regulations prohibit the command from commenting on GLS’ performance.

GLS, a joint venture between DynCorp International and AECOM National Security Program, is one of several vendors for the military’s broad Defense Language Interpretation and Translation Enterprise, a $9.7 billion contract for linguist services in the Middle East. The GLS task order is good for one year with an option to renew for three years, according to the INSCOM spokesman.