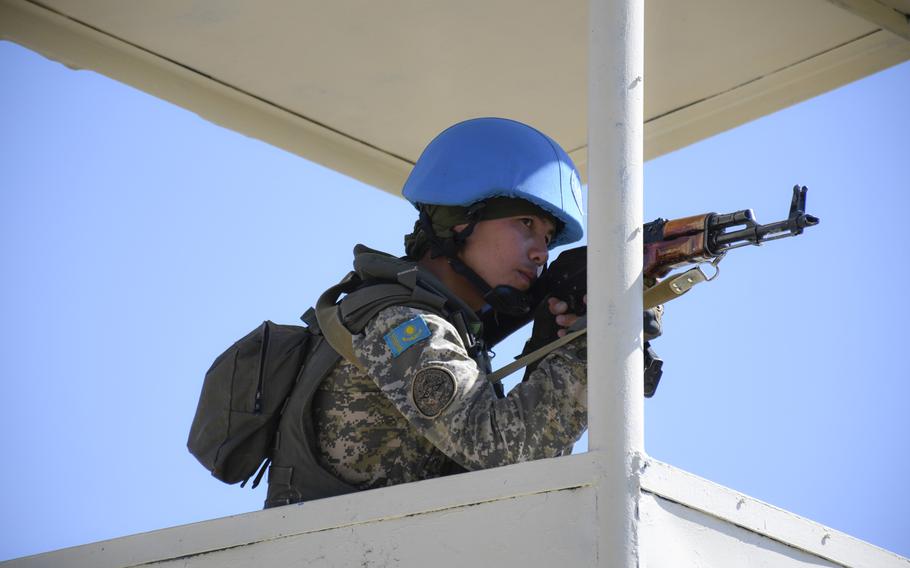 A soldier with the Kazakh ground forces' peacekeeping battalion responds to a simulated attack on his base during the U.S.-led Steppe Eagle exercise on June 25, 2019. Kazakhstan?s contributions to global peacekeeping and security efforts have increased after more than a decade of such training. (J.P. LAWRENCE/STARS AND STRIPES)

A soldier with the Kazakh ground forces' peacekeeping battalion responds to a simulated attack on his base during the U.S.-led Steppe Eagle exercise on June 25, 2019. Kazakhstan?s contributions to global peacekeeping and security efforts have increased after more than a decade of such training. (J.P. LAWRENCE/STARS AND STRIPES) 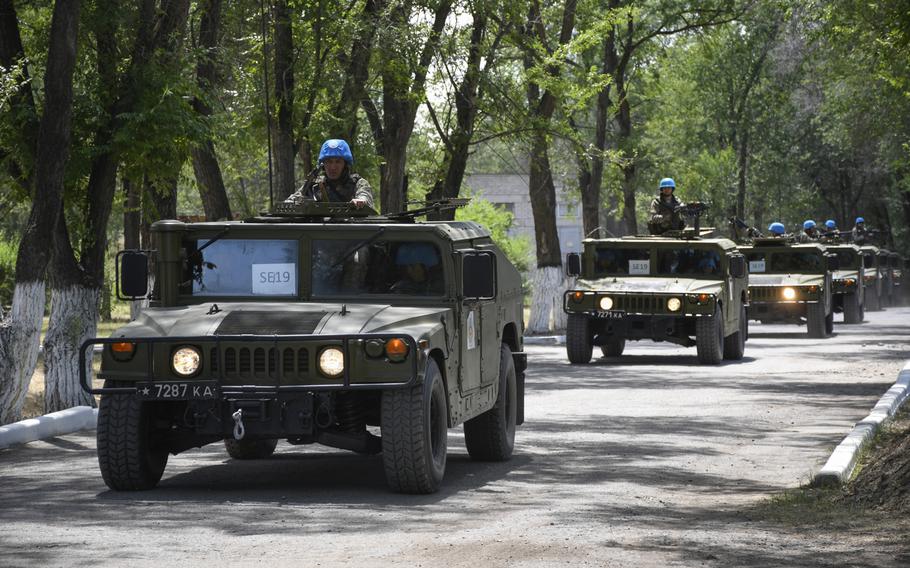 Soldiers with the Kazakh Ground Forces peacekeeping battalion convoy to training during the U.S.-led Steppe Eagle exercise at the Chilikemer Training Area outside of Almaty, Kazakhstan on June 23, 2019. Kazakh troops will serve this fall as U.N. peacekeepers in Lebanon. (J.P. LAWRENCE/STARS AND STRIPES) 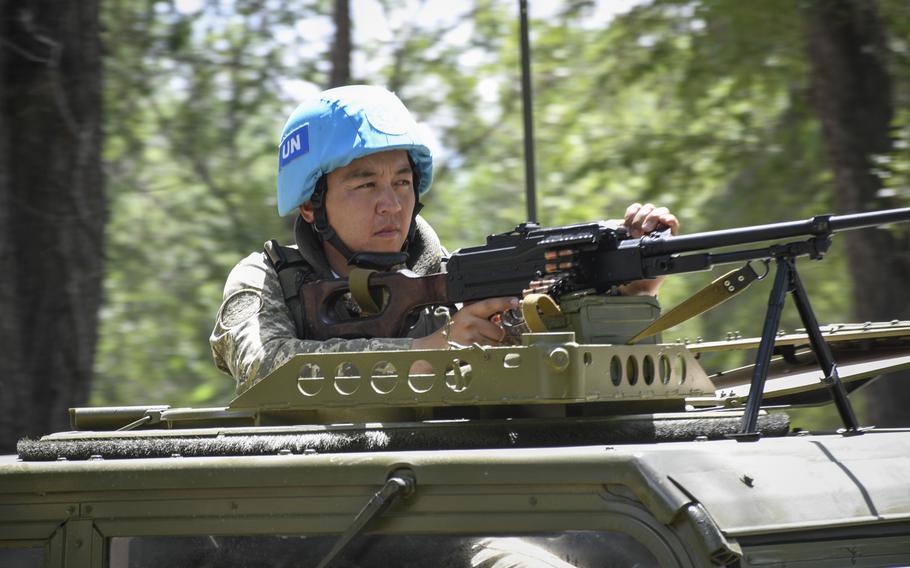 A soldier with the Kazakh ground forces' peacekeeping battalion mans the turret of a Humvee as he convoys to training during the U.S.-led Steppe Eagle exercise at the Chilikemer Training Area near Almaty, Kazakhstan on June 23, 2019. (J.P. LAWRENCE/STARS AND STRIPES) 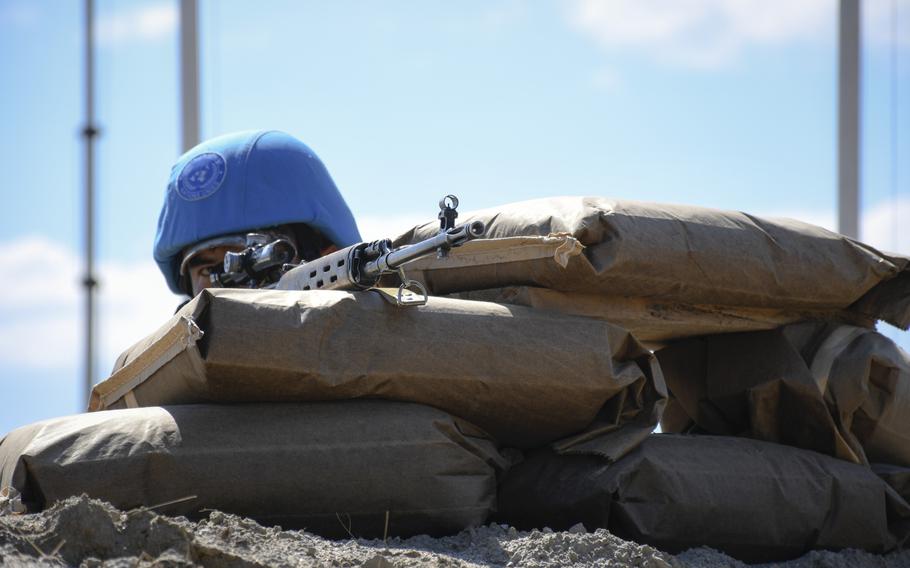 A soldier with the Kazakh Ground Forces' peacekeeping battalion responds to a simulated attack on his base during the U.S.-led Steppe Eagle exercise in the Chilikemer Training Area near Almaty, Kazakhstan on June 23, 2019. (J.P. LAWRENCE/STARS AND STRIPES)

ALMATY, Kazakhstan — On a plain in rural Kazakhstan, soldiers from this former Soviet republic worked with American troops and coalition partners to practice neutralizing snipers, to help women who were victims of violence and to locate hidden weapons.

The scenarios were part of the annual, U.S.-led Steppe Eagle exercises, but the increase in Kazakhstan’s contributions to global peacekeeping and security efforts, after more than a decade of such training with the Americans, is very real.

“Kazakhstan has become an exporter of security,” said U.S. Army Lt. Col. Dan Horst, the officer in charge of the American contingent at Steppe Eagle, as the weeklong exercise wrapped up in a training area near the Kazakh city of Almaty.

“They’re not just consuming assistance to get better, they’re better now, and they’re contributing to the security picture,” Horst said.

Kazakhstan is the country in Central Asia doing the most to help U.S. efforts to stabilize Afghanistan, Central Command said in a posture statement released in February.

The Kazakhs trade with the Afghans, provide electrical power and educational opportunities, support programs for Afghan women, donate to a fund to develop the Afghan national security forces, and offer technical support and services to the Afghans, CENTCOM said.

With U.S. help, Kazakhstan became, in November last year, the first Central Asian country to deploy a company-level unit to Lebanon on a U.N. peacekeeping mission, CENTCOM said in the statement.

The Central Asian country has been renovating the Chilikemer Training Area, where Steppe Eagle took place, over the last several months, hoping that other countries in the region will send their troops there for peacekeeping training.

The strong ties between the U.S. and Kazakhstan contrast sharply with the Soviet era. As Russia’s economy has faltered, its influence in Central Asia has waned, creating an opening for the U.S. — and China — to step in, said Kamran Bokhari, founding director of the Washington, D.C.-based Center for Global Policy.

“In many ways, the U.S is late to the game,” he said. “The question is, how can the U.S. insert itself and ensure China is not making big gains in Central Asia?”

Today, relations between the U.S. and the sprawling, strategically situated, oil-rich nation have been hailed by CENTCOM as the “most mature and forward-thinking in Central Asia.”

Kazakhstan, and Central Asia, used to be seen more for what they were close to or in-between, rather than for what the countries themselves had to offer,” said Gavin Helf, senior expert on Central Asia for the United States Institute of Peace.

Maintaining military-to-military programs in Kazakhstan with a focus on building defense institutions and professional military education “will position us to maintain our comparative advantage with a country situated on the doorsteps of Russia and China,” CENTCOM said in its posture statement.

Balancing act Kazakhstan continues to have to balance relations with its two powerful neighbors, Russia and China, against those with the U.S.

“When you live between two strong regional powers, both of whom do not always 100% have your best interests at heart, it’s nice to have friends,” Helf said in an email.

Although the U.S. will likely never be as important to Central Asian countries as either China or Russia, Helf said, it can be an influential “third friend” in the region.

As it builds relations, the U.S. must understand the constraints Kazakhstan is operating under, including the need to “avoid actions Russia interprets as threatening” and the fact that, even as the U.S. tries to wean the Kazakhs and other Central Asian countries off Russian weapons systems, U.S. military equipment may be too expensive for them.

Kazakhstan is a member of a collective security pact with Russia and Armenia, Belarus, Kyrgyzstan and Tajikistan that allows it to purchase military equipment at preferential prices. Kazakhstan trains its soldiers at military universities in Russia and Belarus, the Kazakh mission to the U.N. states on its website, and the country is reportedly one of the most active members of the organization, contributing troops to a collective rapid reaction force.

Though the most prosperous country in Central Asia, Kazakhstan suffered an economic downtown that began in 2014 in Moscow and came to Astana, and corruption, bureaucracy, and arbitrary law enforcement remain concerns, according to the CIA World Factbook.

In part because of U.S.-led exercises like Steppe Eagle, however, the Kazakh military has undergone a sea change in just a few years, Horst said. It’s transitioning from a Soviet-style model, in which officers are paramount, to a Western-style one that gives more power to non-commissioned officers, he said.

Exercises like Steppe Eagle have helped Kazakh soldiers to develop skills that allow them to work seamlessly with troops from other countries, Kazakh Maj. Amangaliuly Assylkhan told Stars and Stripes, in English.

Compared with a few decades ago, when Kazakhs would have spoken Russian as a first or second language, many of them today speak English, Horst said.

They’ll use their English skills on peacekeeping duties in Lebanon, said Horst, adding that a well-trained, modern Kazakh military will have a positive impact on the entire Central Asia region.

“The more we can empower our partners to solve regional problems, the less dependent they will be on us or other Western forces to maintain peace and stability,” he said.