A sailor boards a vessel on May 2, 2018, near Souda Bay, Greece, as part of a practice raid during Phoenix Express, an exercise to improve international maritime policing in the Mediterranean Sea. (Ryan U. Kledzik/U.S. Navy)

A sailor boards a vessel on May 2, 2018, near Souda Bay, Greece, as part of a practice raid during Phoenix Express, an exercise to improve international maritime policing in the Mediterranean Sea. (Ryan U. Kledzik/U.S. Navy) 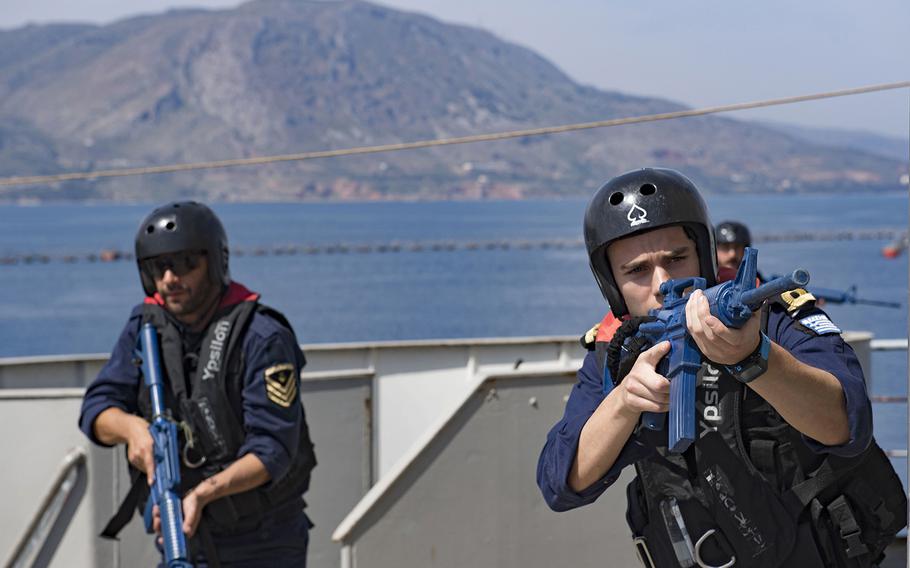 Greek sailors take part in a simulated raid on May 2, 2018, near Souda Bay, Greece, during Phoenix Express, an exercise to strengthen cooperative policing in the Mediterranean Sea. (Ryan U. Kledzik/U.S. Navy) 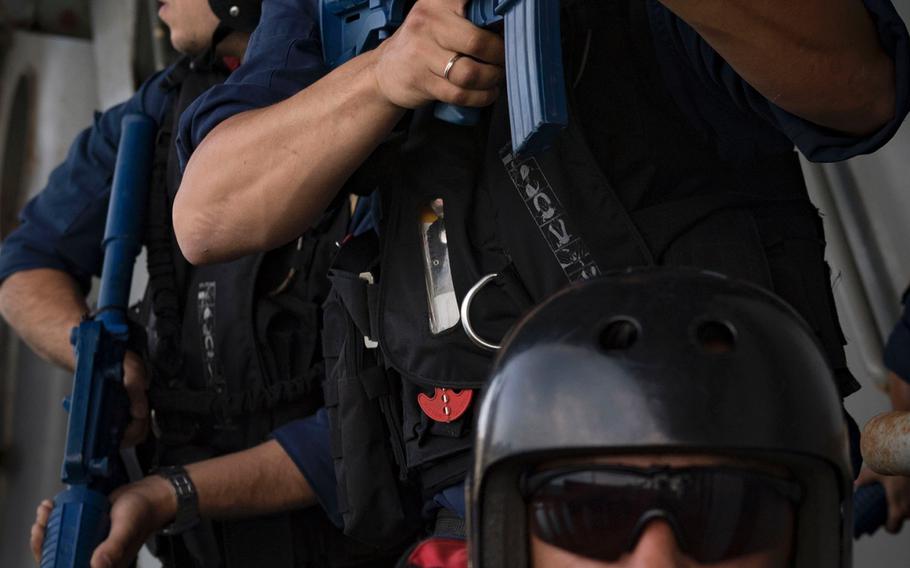 During the weeklong naval drill, set to end Friday, the navies teamed up to spot, raid and search suspicious ships and detain suspected criminals.

A key objective has been to improve African nations’ surveillance capabilities and communications with one another. This way, if one navy spots criminal activity in neighboring waters, it can alert that country’s maritime police — a cooperative effort that was uncommon a decade ago.

Participants have also been learning how to deal with illegal immigrants, who have crossed the Mediterranean from Africa in record numbers since 2015.

Phoenix Express is one of three yearly sea-policing exercises hosted by U.S. Africa Command. International security cooperation in the waterway is considered vitally important because of the shipping routes that link Europe and North Africa.

The other two policing exercises conducted earlier this year were Obangame Express in West Africa and Cutlass Express in East Africa.

Nations must work together to patrol large expanses of water that criminals take advantage of to operate and elude capture, the Navy said.

“These established and tested partnerships will help us overcome the challenges that threaten freedom and security in the maritime domain,” said Capt. Amy Egeli, the exercise director, in a statement.

Migrants from Africa who cross the Mediterranean can fall prey to traffickers who promise them passage but instead imprison them and sell them into forced labor, said Chris Jasparro, national security affairs professor at the Naval War College.

“Crossings have gone down in the last year, so it’s not getting worse partly because of the increased policing,” he said. “But the flows are still significant and the policing and other measures need to be sustained.”