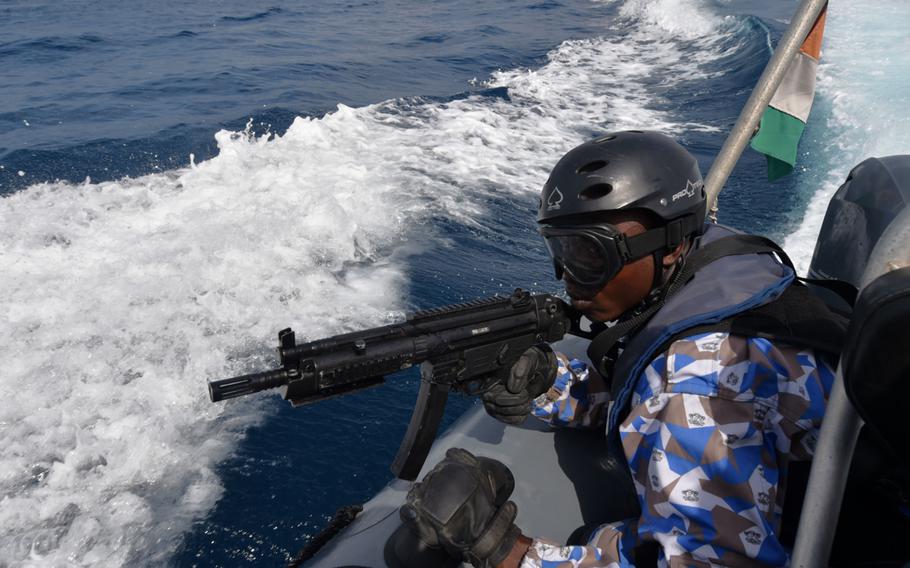 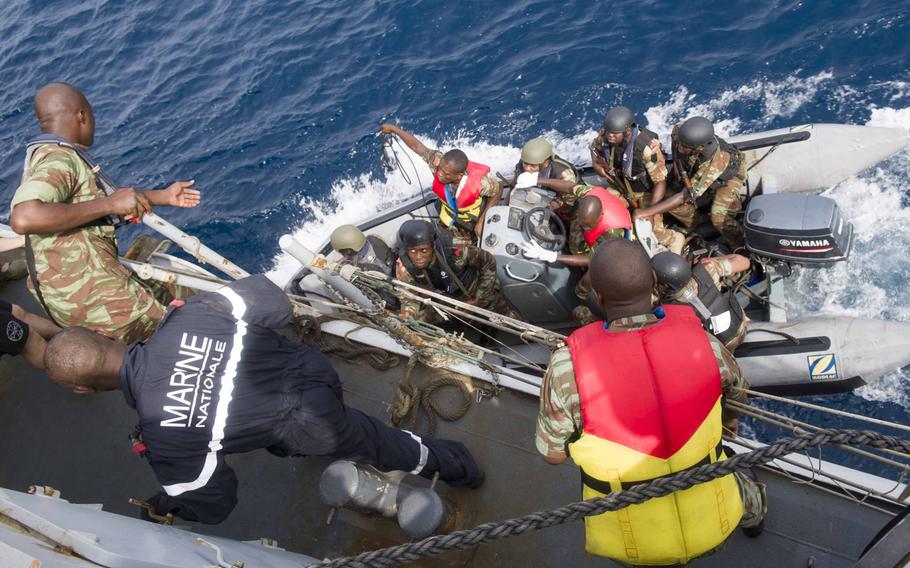 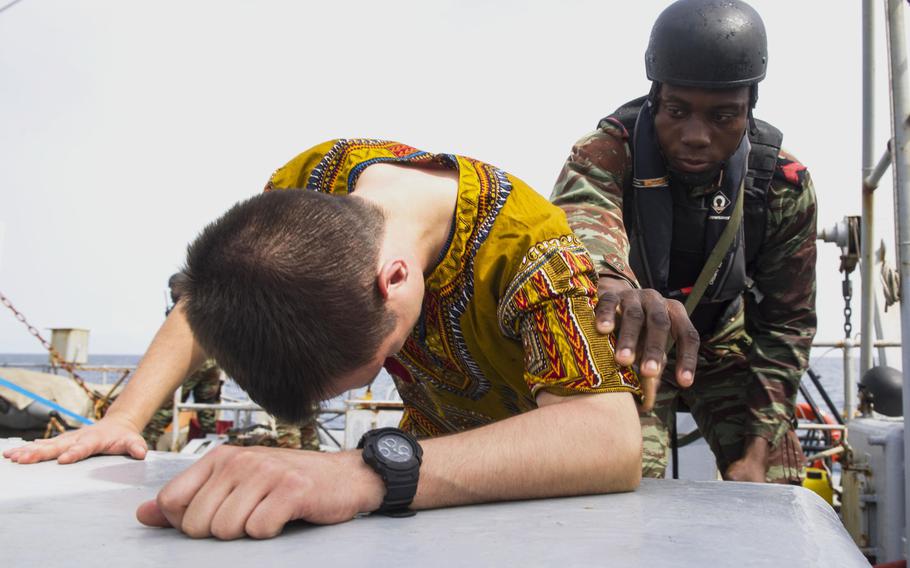 Sailors from the Ivory Coast search a role player in a search-and-seizure drill during the Obangame Express exercise, which brought together 32 nations to improve at-sea policing, Friday, March 24, 2017. (Justin Stumberg/U.S. Navy)

An intensive exercise that trains African nations to better protect their waters against pirates, rogue fisherman, human traffickers and other seaborne criminals wraps up Friday in the Gulf of Guinea.

The exercise is aimed at curing “sea blindness,” the shortcomings in monitoring waters for unlawful activity and communicating with other countries to catch criminals, said U.S. Navy Capt. Heidi Agle, an officer in this year’s Obangame Express, a 12-day exercise hosted by U.S. African Command.

“We all have an investment in the ocean — for the security of trade and for safety in general,” she said.

African governments began working with U.S. authorities in 2010 — when maritime attacks in the region had reached record levels — to create joint training exercises that could improve African countries’ ability to protect their seas and their vital shipping trade against pirates and other outlaws.

A yearly maritime-policing exercise grew from a handful of participating countries to 32. Realistic scenarios are used to test the countries’ ability to respond to crimes at sea and on shore and to communicate with other countries to capture the criminals, Agle said. A key simulation to be carried out in the exercise involves a hijacked vessel sailing through different territories, which requires teamwork and strong tactical skills, she said.

After crews raid and re-take the ship, they must know how to search for pirates and captives and how to check the manifest for human trafficking, Agle said. A knowledge of applicable international law is also key.

The exercises have grown more complicated as the countries have improved their skills. “Each year the goal is to step up the game,” Agle said.

Before 2009, pirates were the scourge of Cameroon’s waters, robbing, hijacking and kidnapping with little to stop them, he said. Oil companies, a huge source of revenue for Cameroon, threatened to pull their off-shore drilling operations unless the government safeguarded the sea.

The threat prompted Cameroon’s leaders, who had focused law enforcement on land, to buy ships, hire crews and invest in training, Fonkoua said. Aside from oil interests, keeping Cameroon’s waters safe is paramount for its economy, which depends heavily on shipping for most of its commodities, he said.

It became apparent that coastal waters could be more effectively policed if they worked with neighboring countries such as Nigeria, he said.

The exercises showed Cameroon where it needed to augment its on-board technology, Fonkoua said. They installed radar and modern communication systems, which combined with a greater presence on the water have eliminated piracy off Cameroon’s coast in the past two years, he said.

Agle said this year’s Obangame Express showed how much countries like Cameroon have improved their at-sea policing.

“It’s a level of sophistication that did not exist in its inception in 2010,” Agle said.