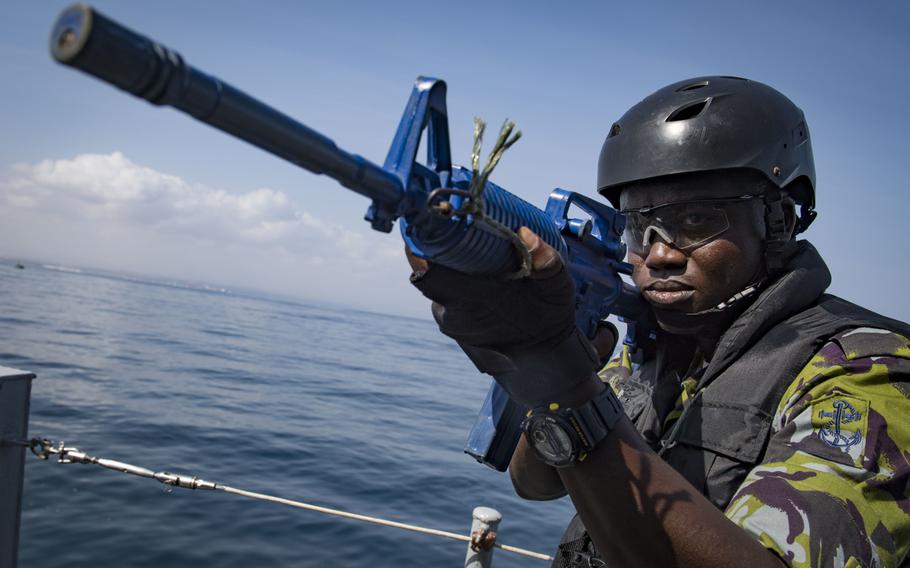 A Kenyan sailor participates in visit, board, search and seizure training aboard the Indian frigate INS Trikand during exercise Cutlass Express 2019 in Djibouti, Feb. 3, 2019. (Ryan U. Kledzik/U.S. Navy)

A Kenyan sailor participates in visit, board, search and seizure training aboard the Indian frigate INS Trikand during exercise Cutlass Express 2019 in Djibouti, Feb. 3, 2019. (Ryan U. Kledzik/U.S. Navy) 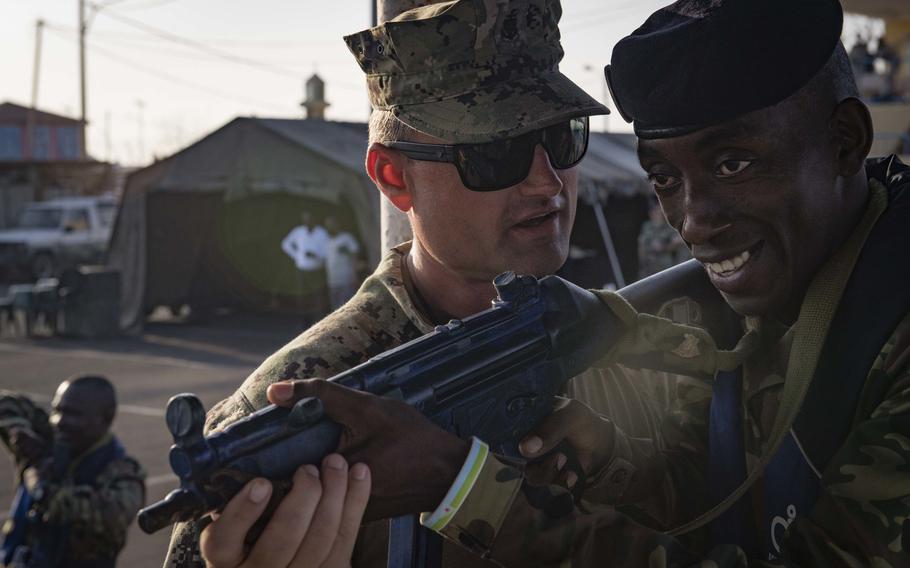 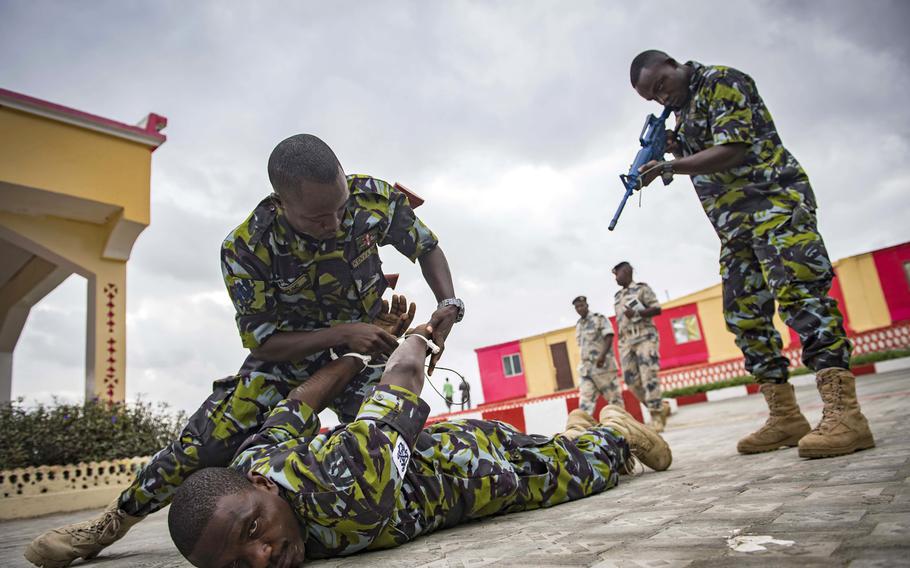 Sailors from the Kenyan navy participate in visit, board, search and seizure training during exercise Cutlass Express 2019 in Djibouti, Jan. 30, 2019. (Ryan U. Kledzik/U.S. Navy) 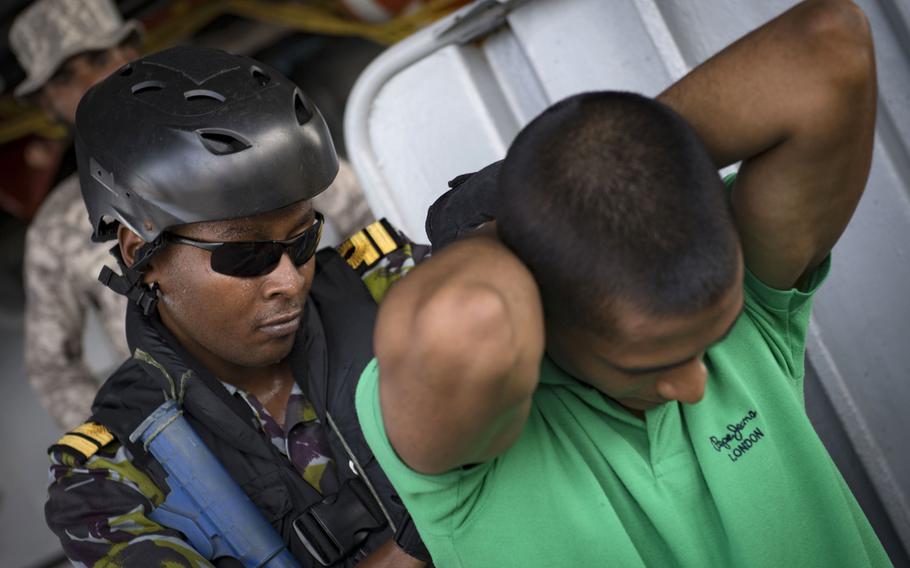 A Kenyan sailor detains a simulated human trafficker as part of a visit, board, search and seizure drill aboard the Indian frigate INS Trikand during exercise Cutlass Express 2019 in Djibouti, Feb. 3, 2019. (Ryan U. Kledzik/U.S. Navy)

A U.S.-led exercise is helping East African and Indian Ocean nations combat maritime crime, while building a stronger coalition amid competition for influence in the region.

Cutlass Express brought together 15 countries to improve cooperation in policing waters plagued by drug smuggling, human trafficking, illegal fishing and other crimes that fund violent extremists and cause suffering in the region, officials said.

As part of the exercise hosted by U.S. Africa Command and Naval Forces Europe and Africa, navies worked together to spot, raid and search participating ships during simulations near Djibouti, Mozambique and Seychelles.

The exercise, set to end Thursday, is one of three regional drills meant to strengthen collaborative policing in seas surrounding Africa, along with Obangame Express in West Africa and Phoenix Express in the Mediterranean.

“The security of those waters is very important to all of us,” said Adm. James Foggo, head of the Navy’s Europe and Africa command, at a December conference in Naples, Italy. “What we’re trying to do is assist our African partners and friends with maintaining that maritime security.”

Extremist threats are ongoing in Somalia and across the Gulf of Aden in Yemen, and drug smugglers often transit the region’s waters on their way to Europe with Afghan heroin, he said.

But, in recent months, the Pentagon has signaled its plans to shift its focus in Africa from counterterrorism missions to near-peer competition in an effort to counter Beijing and Moscow.

While China’s efforts to gain a foothold in East Africa have garnered attention, Russia, Turkey, Saudi Arabia and the Gulf States are also becoming major players in the region, Jasparro said.

For example, Russia is trying to increase its access to the Red Sea and Turkey’s largest overseas military base is in Somalia. That makes it crucial for the U.S. and its allies to bolster their presence there, including through military exercises, he said.

“The geopolitical, economic environment is becoming more crowded and complicated,” Jasparro said. “They (exercises) help us build influence with the countries in the region.”

Military leaders say the exercise has evolved since its inception almost a decade ago as African nations have improved their technology and participants have learned to better communicate and work together.

Last week, servicemembers from several of the participating services, including the U.S. Navy, U.S. Coast Guard, Indian navy and Royal Netherlands Marines, trained dozens of students in boarding, search and seizure techniques, including close-quarters combat, medical preparedness and search and detainment procedures, the U.S. Navy said in a release.

The destroyer USS Chung-Hoon and the Indian frigate INS Trikand participated in the Djibouti-based portion of the training and are also participating in at-sea phases of Cutlass Express.