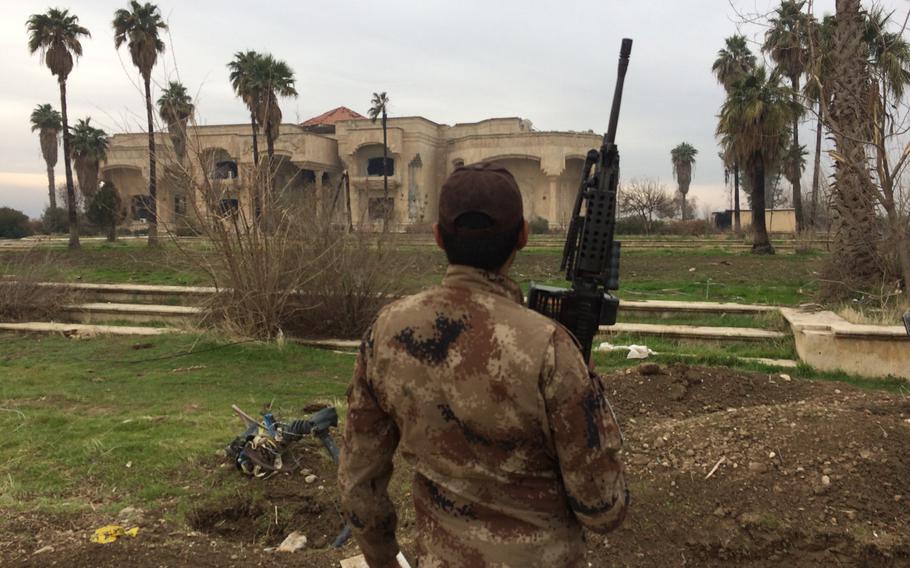 An Iraqi soldier stands guard at a palace in Mosul, Iraq, on Wednesdsay, Jan. 25, 2017. (Seth Robson/Stars and Stripes)

WASHINGTON – Iraqi security forces are now preparing to attack Islamic State fighters entrenched in western Mosul, a battle that the U.S.-led coalition believes could be more bloody than the monthslong fight to recapture the eastern portion of the city from the militants.

The half of Mosul west of the Euphrates River contains smaller roads and corridors where much of the fighting is expected to take place, Air Force Col. John Dorrian, a spokesman for the Operation Inherent Resolve coalition, said Wednesday. It is also much more densely populated, with some 750,000 civilians estimated to live within the area where the fighting will occur.

Iraqi media in recent days has reported the Iraqi security forces have begun preparing floating bridges to allow its troops to cross the Euphrates and dropped leaflets warning civilians of the impending assault. Dorian, speaking from Baghdad, said government-controlled forces have isolated the city’s western outskirts, making it impossible for the Islamic State group to reinforce or resupply its fighters remaining in the city.

“We expect [the Islamic State group] to continue fighting hard and for the rest of the fighting in West Mosul to be difficult, but they do not have the ability remaining to stop the Iraqi security forces’ advance,” he told reporters at the Pentagon.

Through more than three months of fighting in and around Mosul, the terrorist group’s last urban stronghold in Iraq, the Iraqi security forces have killed “a tremendous amount” of enemy fighters, Dorrian said without providing an estimate of enemy deaths. But the Iraqis have suffered severe casualty rates, as well. Iraqi officials have said some 1,600 of its troops have been killed or injured during the operation that began in mid-October. Additionally, some 5,000 civilians have been hurt or killed in the fighting, according to Iraqi estimates.

The U.S. commander in charge of coalition ground forces in Iraq, Army Maj. Gen. Joseph Martin, last week characterized the battle in east Mosul as “some of the hardest door-to-door fighting the world has seen in many years.”

The Islamic State group has controlled Mosul for more than two years. U.S. defense officials have said the group pulled many of its fighters from east Mosul weeks ago to prepare to defend the western part of the city. But the group has also showed signs of increasingly low morale.

Martin told reporters last week that the coalition had observed large groups of Islamic State fighters attempting to desert. Dorrian said Wednesday that the group has been observed executing some of its own fighters, perhaps ones attempting to flee.

Iraq’s elite Counter Terrorism Force will likely spearhead the invasion of west Mosul, just as it did in the eastern part of the city.

Despite the concerns about the constricted fighting areas and denser civilian population in western Mosul, Dorrian said the United States and the coalition would be able to continue supporting the Iraqi forces with air and artillery strikes.

He touted a relatively new weapon -- the Advanced Precision Kill Weapon System, which is a laser-guided rocket – as being particularly helpful in such conditions. The weapon, which is used by Air Force’s A-10 Thunderbolt II and the Marines’ AV-8 Harrier attack planes, is designed to destroy a moving target, such as a vehicle, without impacting its surroundings, Dorrian said.

To date, 60 of the rockets have been used in Mosul.

“It means the coalition is able to support the [Iraqi security forces] with airstrikes in such challenging terrain … without causing any significant increase in civilian casualties and collateral damage,” Dorrian said.