Iraqi soldiers from the 40th Brigade conduct a night live-fire exercise at the Besmaya Range Complex in Iraq on March 25, 2018. The U.S.-led coalition fighting the Islamic State group is handing over the range and about $5 million in equipment to the Iraqi military as international forces draw down their presence in the country. (Antonio Lewis/U.S. Army)

Iraqi soldiers from the 40th Brigade conduct a night live-fire exercise at the Besmaya Range Complex in Iraq on March 25, 2018. The U.S.-led coalition fighting the Islamic State group is handing over the range and about $5 million in equipment to the Iraqi military as international forces draw down their presence in the country. (Antonio Lewis/U.S. Army) 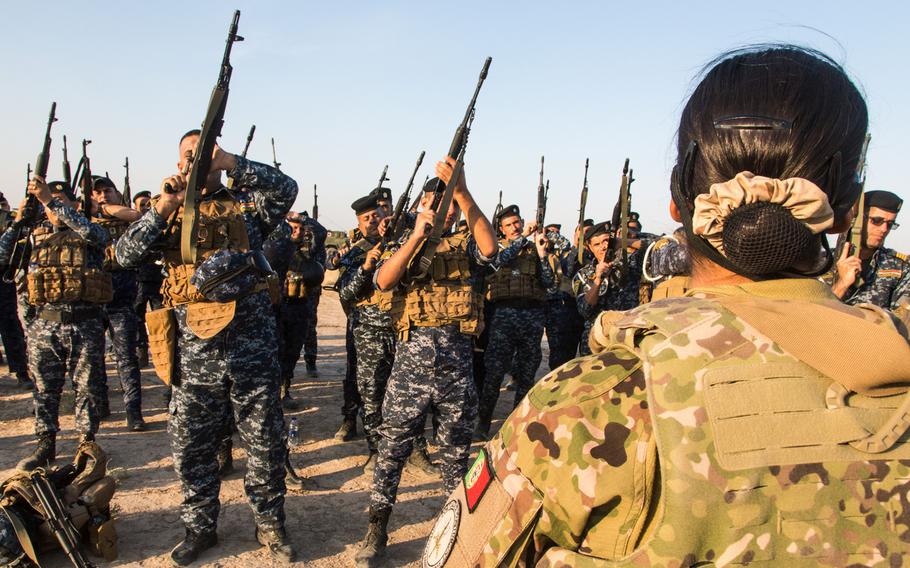 A Portuguese soldier teaches Iraqi Federal Police weapon safety with the AK-74 rifle at the Besmaya Range Complex in Iraq on Aug. 7, 2019. The U.S.-led coalition fighting the Islamic State is handing over the range and about $5 million in equipment to the Iraqi military as international forces draw down their presence in the country. (Brandon Best/U.S. Army)

The U.S.-led coalition in Iraq is due Saturday to hand over to Iraq some $5 million in facilities and equipment and a base south of Baghdad, where some 50,000 Iraqis have been trained as part of the global fight against the Islamic State.

The formal handover of the Besmaya Range Complex follows the coalition’s relinquishment this spring of several smaller bases in the country, where officials now deem ISIS a “low-level insurgency.”

Spain has led training at the complex since 2015, providing instruction in skills such as marksmanship, urban combat, and fighting in tunnels and caves. ISIS built tunnels throughout urban areas to hide its movements and equipment from aerial surveillance and bombardment, after seizing control of swathes of Iraq and Syria in 2014.

The group’s fighters continue to hide out in caves in mountain ranges in Iraq, but ISIS no longer controls any territory and is less able to “wage full-scale war,” the U.K. Defense Ministry said in a statement last week. It is still capable, however, of launching guerilla-style attacks and continues to inspire attacks elsewhere, it said.

The ministry said its forces would depart Camp Taji, a base north of Baghdad where Australia and New Zealand concluded their training missions in recent months, too. But more than 100 British troops will remain in the country and Royal Air Force jets from the Greek island of Crete will continue to patrol the skies over Iraq and Syria.

The withdrawals from Taji follow the coalition’s turnover in March and April of five bases, including Qayarah Airfield West near Mosul, K-1 near Kirkuk and Taqaddum Air Base west of Baghdad.

Part of a long-planned consolidation of forces, the handovers were sped up after tensions between the U.S. and Iran flared in late December, leading to back-and-forth strikes and other escalations that left three Americans and a British soldier dead and many others wounded.

Spain’s forces will return home from Besmaya as the coalition continues to reduce its troop presence. Though U.S. forces are likely to remain in Iraq for a while, their numbers are expected to shrink from the current level of 5,200, officials said.

“There will be some degree of a reduction in force in Iraq,” Ekman said. “That’s what success looks like.”

The troop drawdowns reflect a shift this month from direct training or accompanying troops on operational raids, to more “high-end advice and support to the operational command level,” the Air Force general said.

Overall, the coalition has trained more than 250,000 Iraqi troops. The Iraqis now lead the instruction programs and conduct operations mostly on their own throughout the country, he said, but they still need the coalition’s help in planning, intelligence and surveillance, and airpower.

“The Iraqi Security Forces are already stronger than ISIS,” he said. “Our high-level advising approach is moving our Iraqi partners to improve self-reliance.”