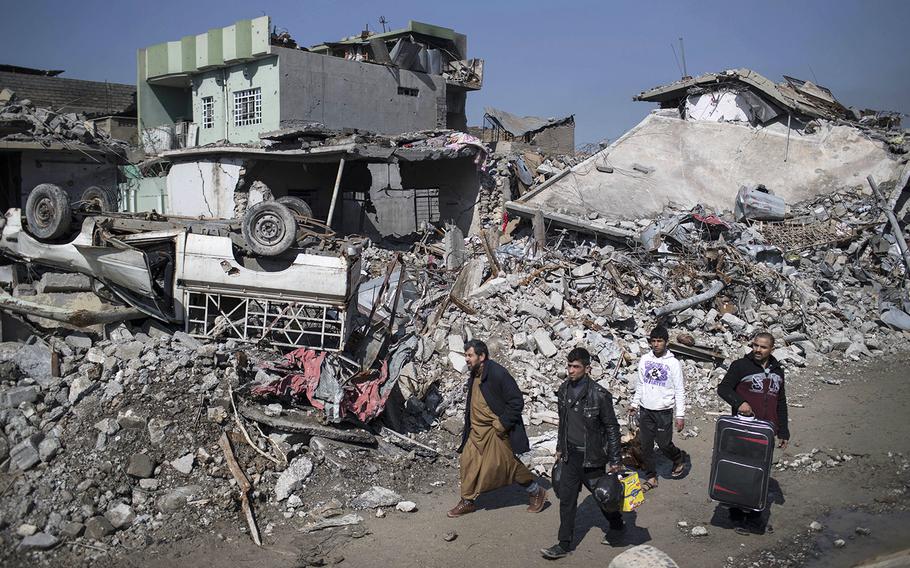 Iraqis walk past debris of houses destroyed during fighting between Iraqi security forces and Islamic State militants on the western side of Mosul, Iraq, Friday, March 24, 2017. (AP)

WASHINGTON — U.S.-led forces fighting the Islamic State are adjusting their tactics in Iraq and Syria based on evidence that the terrorist group lures airstrikes at buildings in which they have trapped civilians, a spokesman for Operation Inherent Resolve said Thursday.

“What you see now is not the use of civilians as human shields. Now it is something much more sinister,” said Army Col. Joseph Scrocca, a spokesman for the U.S.-led coalition. “[The Islamic State] is smuggling civilians into buildings so we won’t see them, and trying to bait the coalition to attack.”

The terrorist group has held civilians hostage in buildings that would be targets for U.S. and coalition jets at least three times, Scrocca told reporters at the Pentagon.

He said the Islamic State had shifted to this tactic as an attempt to increase civilian casualties in order to “take advantage of the public outcry and deter action in the future.”

The coalition had suspected the terrorist group was employing this new tactic and had been looking for evidence, which it obtained through surveillance March 29, Scrocca said.

“For the first time, we caught this on video yesterday, as armed [Islamic State] fighters forced civilians into a building, killing one who resisted and then used that building as a fighting position against the [Iraq Counter Terrorism Service forces],” he said.

Scrocca also said the Defense Department was working to declassify the video and intends to release it publicly. In addition, U.S. and coalition jets have adjusted their tactics in response.

“Throughout the last couple of weeks we’ve suspected it, we’ve heard rumors of it,” Scrocca said. “Now we kind of know what it looks like … we are looking for those signs. It has caused some adjustments to our procedures.”

However, he declined to specify Thursday how U.S. and coalition forces had adjusted tactics.

The announcement of video evidence follows reports that hundreds of civilians might have died as a result of U.S. airstrikes on March 17 in the battle for Mosul, the last urban stronghold for the Islamic State in Iraq.

Army Lt. Gen. Stephen Townsend, the top commander for U.S. and coalition forces in the fight against the Islamic State, has also directed a formal, in-depth investigation, known as a 15-6, into the airstrikes, Scrocca said.

The airstrikes have led to questions about whether adjustments that the United States made to its rules of engagement in December to allow lower-ranking commanders in the field to direct airstrikes has resulted in the increased loss of civilian life.

Scrocca said the December adjustment allowed for specific U.S. field officers, in conjunction with their Iraqi counterparts, to direct dynamic airstrikes – ones that are in immediate reaction to an ongoing fight or direct threat. More senior leadership at headquarters remains involved in planned strikes, ones using extended surveillance and not part of an ongoing fight.

He said most airstrikes in the fight against the Islamic State in Mosul are dynamic in nature and not planned, and that the strikes involved in the March 17th incident were likely dynamic.