US leaders say China is an emerging threat for NATO 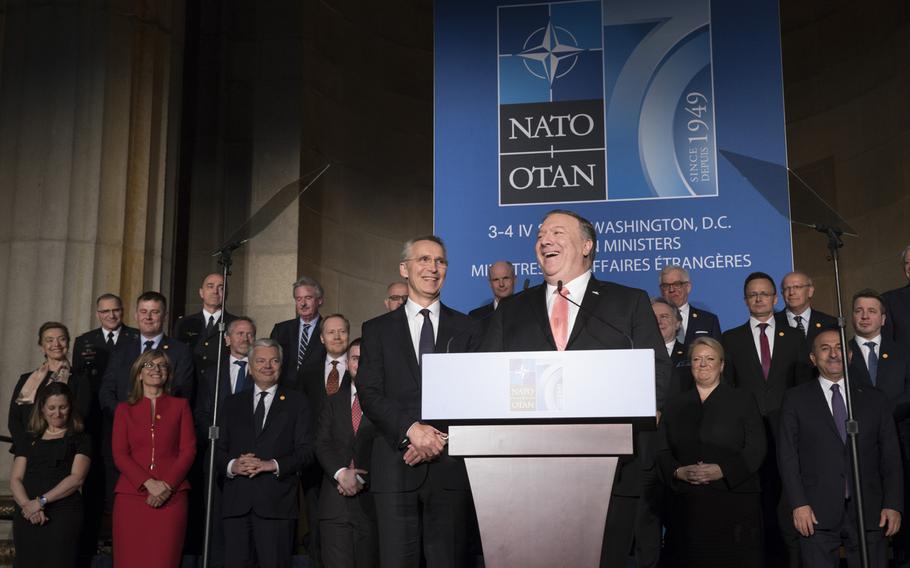 The U.S.-led NATO pact must adapt to face an increased threat posed by China even as European allies work to counter Russia’s activities, America’s top diplomat said Thursday at a meeting of alliance foreign ministers.

While NATO for the past five years has been adapting to a more aggressive Russia, “Chinese strategic competition, including technology and 5G (networks), and many other issues” also are threats for allies in Europe, Pompeo said.

Since the 2014 invasion of Ukraine, NATO has focused on Russia, but the U.S. now wants the alliance to also focus on China, whose economic and military power has expanded significantly in recent years. U.S. military officials have been raising concerns about Chinese investment in ports and other infrastructure projects around Europe.

And on Wednesday, Vice President Mike Pence raised the issue on the sidelines of NATO talks, saying “adjust we must.”

“Whether we like it or not the implications of China’s rise will profoundly affect the choices NATO members will face, individually and collectively,” Pence said.

“As we meet that challenge, our European allies must do more to maintain the strength and deterrence of our trans-Atlantic alliance with their resources,” he said.

Allies in Europe are under intense pressure by the U.S. to increase their military spending for the alliance’s collective defense, particularly Germany — Europe’s economic powerhouse often criticized for not meeting NATO defense budget targets.

“All NATO allies made a promise to invest more in defense,” NATO Secretary-General Jens Stoltenberg said Thursday. “I expect all allies to deliver on what they’ve promised.”

Meanwhile, NATO is looking at options to counter a new Russian missile system, Stoltenberg said. However, NATO has ruled out deploying ground-launched missiles in Europe as a response to Moscow’s violation of a Cold War-era Intermediate-Range Nuclear Forces Treaty, he said.

“NATO is preparing for a world without an INF treaty,” Stoltenberg said after a meeting with allied foreign ministers. “We will not mirror what Russia is doing. We will be measured and coordinated. And we have no intention of deploying ground-launched nuclear missiles in Europe.”

In December, Washington announced it intended to withdraw from the treaty without compliance from Moscow, which denies any wrongdoing.

If no breakthrough is reached, the treaty will expire this summer. This has sparked concerns among some security analysts about the effect on the military balance in Europe and concerns of a dangerous new era of nuclear brinkmanship.

Stoltenberg said allies will “maintain credible and effective deterrence and defense.” But allies also are “strongly committed to arms control and nonproliferation,” he said.

Meanwhile, as expected, NATO agreed Thursday to expand its presence in the Black Sea, with a focus on intelligence gathering and stepping up training support for the Ukrainian and Georgian navies.

The two non-NATO members have both been involved in conflicts with Russia.

The Black Sea has emerged as a flashpoint with Russia, which seized three Ukrainian ships during a standoff with Ukraine last year.

“Right now, one of NATO’s naval groups is on patrol in the Black Sea. And today, it is exercising with Ukrainian and Georgian ships,” Stoltenberg said. “So we will maintain our focus and our presence in this vital region.”