US, Latvian troops focus on training, not Russia 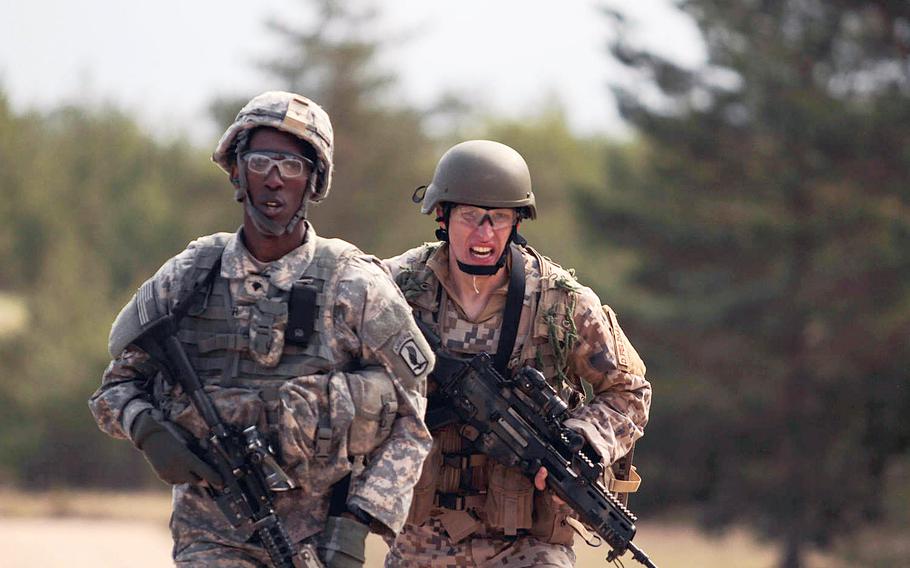 An American paratrooper from the 173rd Infantry Brigade Combat Team and a Latvian soldier sprint to the finish line Wednesday, April 30, 2014, during a stress shooting exercise that tested their endurance and marksmanship under rigorous physical conditions. (Matt Millham/Stars and Stripes)

An American paratrooper from the 173rd Infantry Brigade Combat Team and a Latvian soldier sprint to the finish line Wednesday, April 30, 2014, during a stress shooting exercise that tested their endurance and marksmanship under rigorous physical conditions. (Matt Millham/Stars and Stripes) 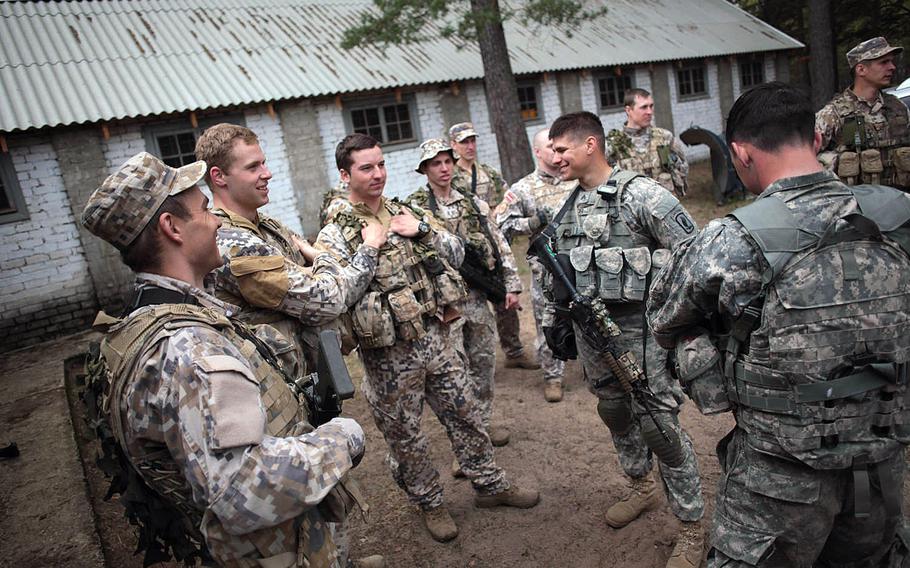 Latvian and American soldiers chat Wednesday, April 30, 2014, before being teamed up to run a stress shooting course that tested their endurance and marksmanship under rigorous physical conditions. (Matt Millham/Stars and Stripes) 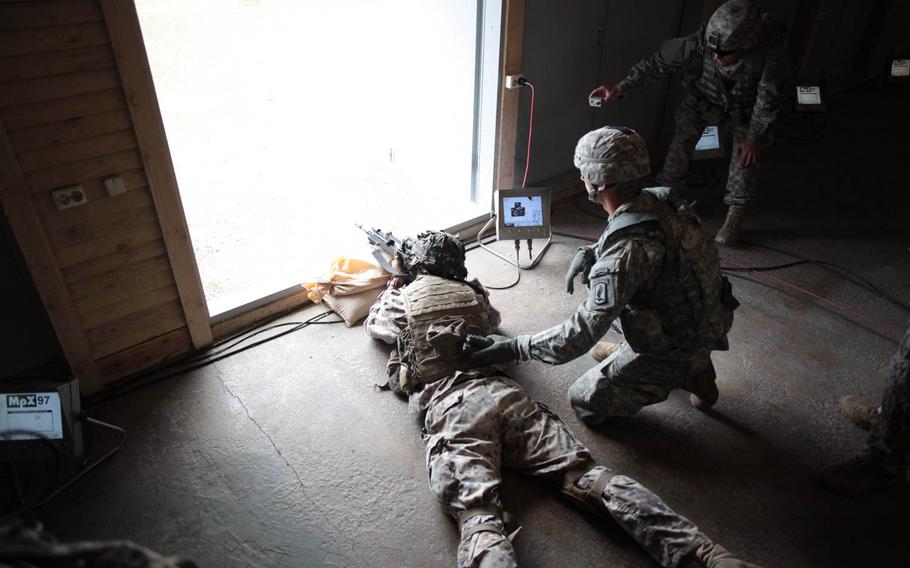 After running a quarter mile in a gas mask and dragging a "casualty" hundreds of yards, a Latvian soldier fires a rifle at a target hundreds of yards away Wednesday, April 30, 2014, as part of a shooting exercise meant to simulate the stress of battlefield conditions and build teamwork between American and Latvian soldiers. (Matt Millham/Stars and Stripes) 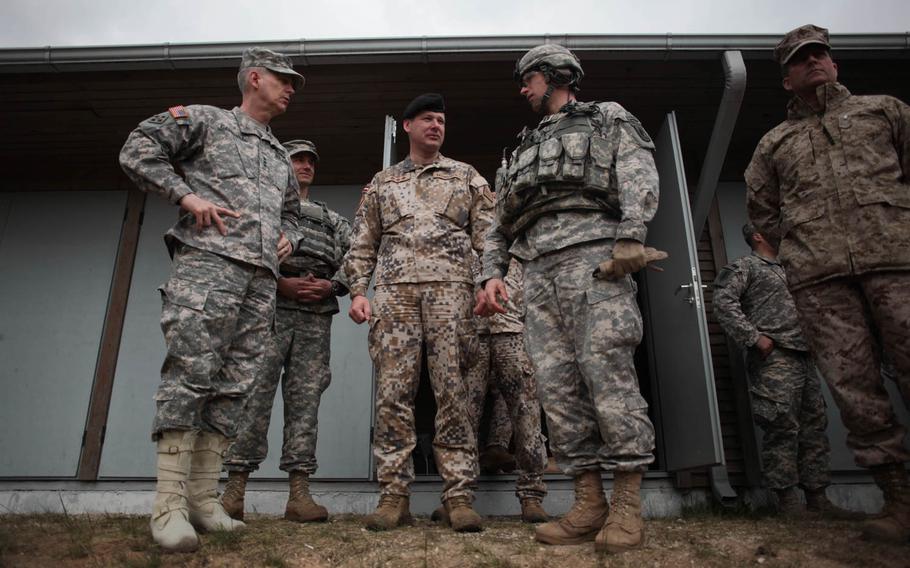 Lt. Gen. Donald Campbell Jr., left, the commander of U.S. Army Europe, speaks Wednesday, April 30, 2014, with the commander of an American rifle company and the commander of a Latvian army brigade, who are conducting joint training exercises outside of Riga, Latvia, which is roughly 120 miles from the Russian border. (Matt Millham/Stars and Stripes) 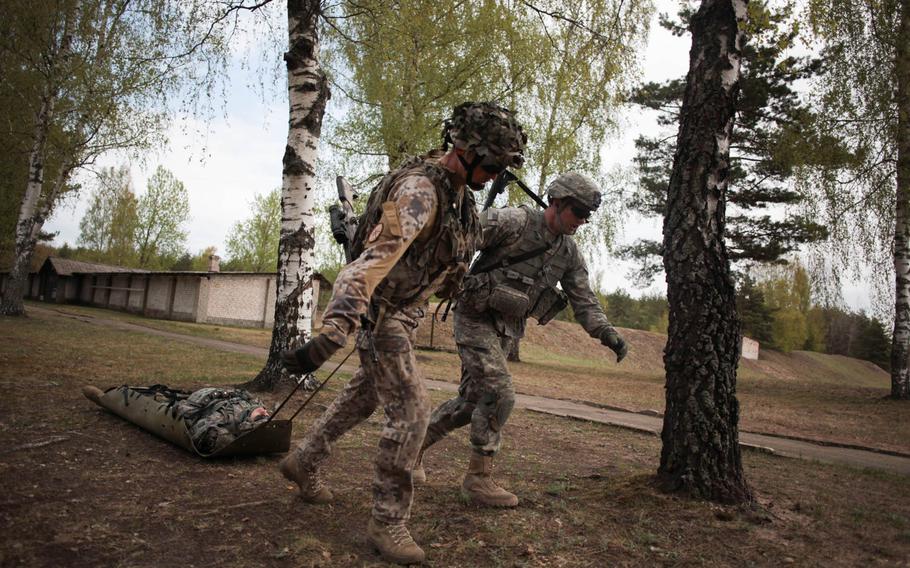 A Latvian and an American soldier drag a "casualty" Wednesday, April 30, 2014, during a shooting exercise designed to build camaraderie between the soldiers while putting them under extreme stress to simulate battlefield conditions. (Matt Millham/Stars and Stripes) 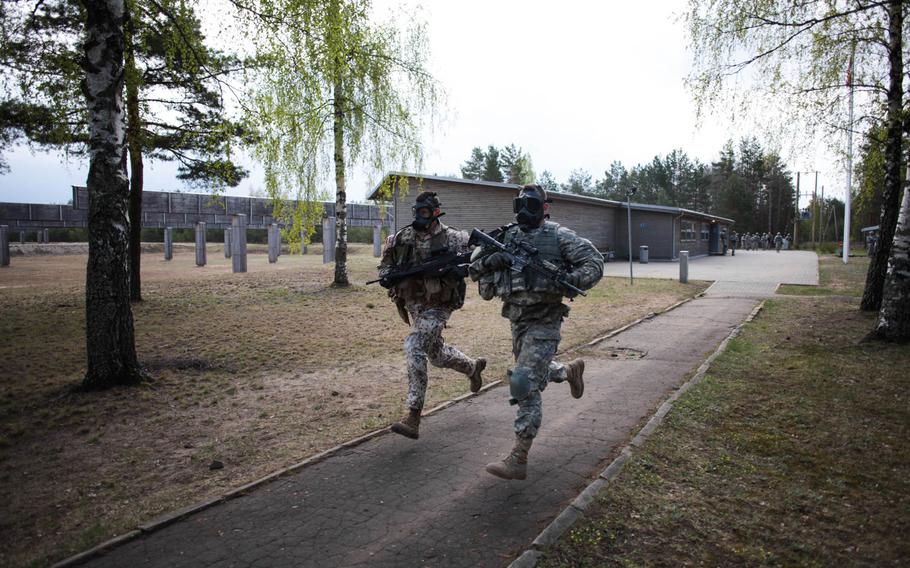 An American and a Latvian soldier sprint in full gear and gas masks at the start of a stress shooting competition on Wednesday, April 30, 2014, meant to build camaraderie and test their endurance and marksmanship under simulated battlefield conditions. (Matt Millham/Stars and Stripes) 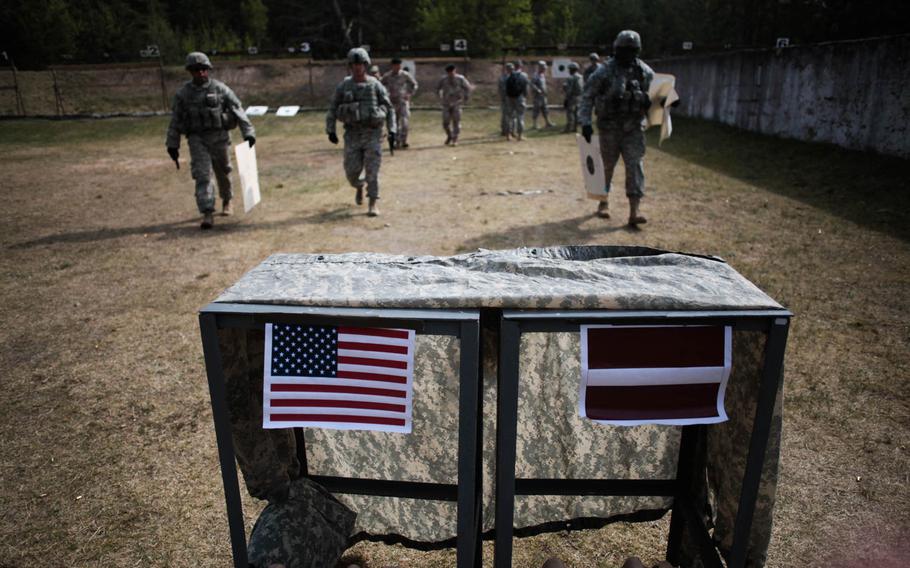 An American and a Latvian flag are taped to a table at a pistol range Wednesday, April 30, 2014, in Adazi, Latvia, where U.S. and Latvian soldiers are conducting joint training. (Matt Millham/Stars and Stripes) 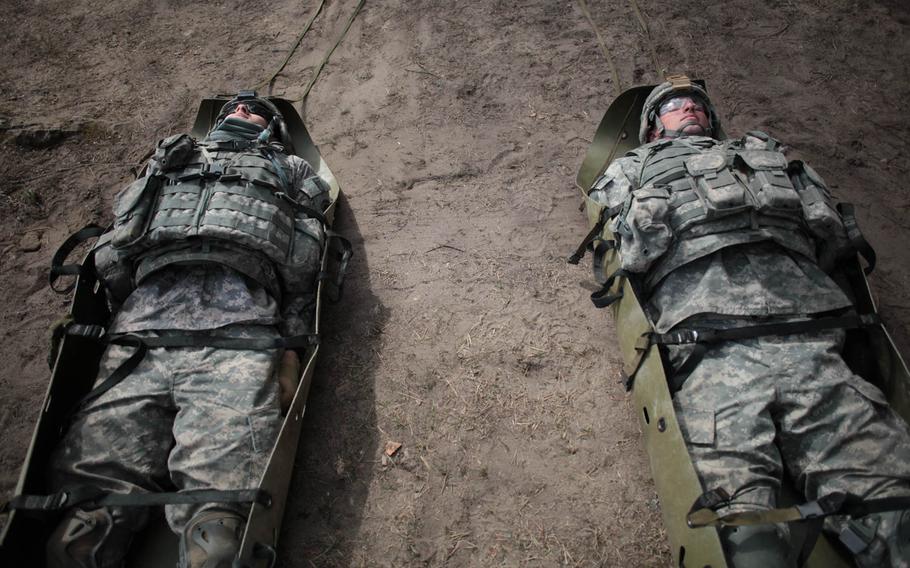 A pair of American soldiers wait to be dragged as "casualties" Wednesday, April 30, 2014, during a team-building exercise with Latvian soldiers. (Matt Millham/Stars and Stripes) 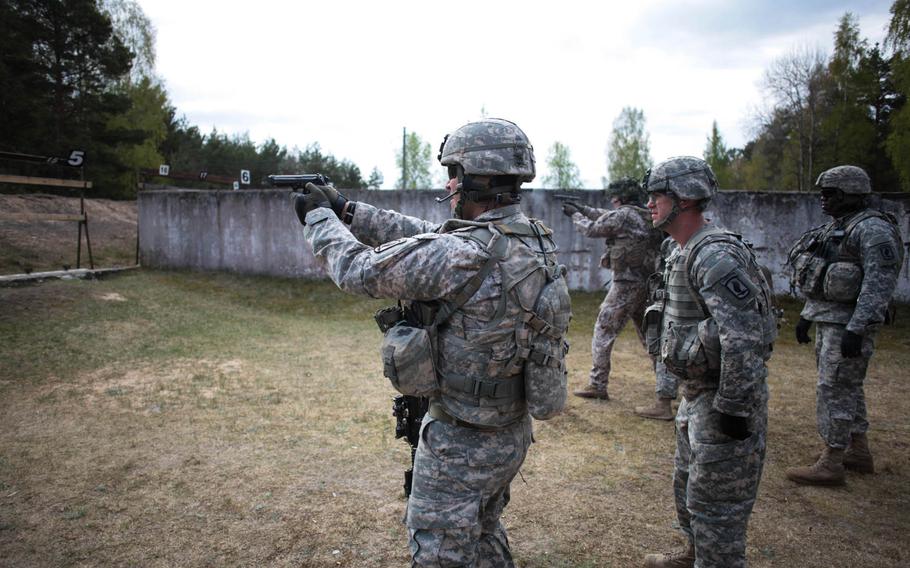 An American and a Latvian soldier fire pistols Wednesday, April 30, 2014, as part of a stress firing exercise that also helped build camaraderie between the two forces, which could end up training together for months as the U.S. seeks to reassure NATO allies that are nervous that Russia's aggression in Ukraine could spill over. (Matt Millham/Stars and Stripes) 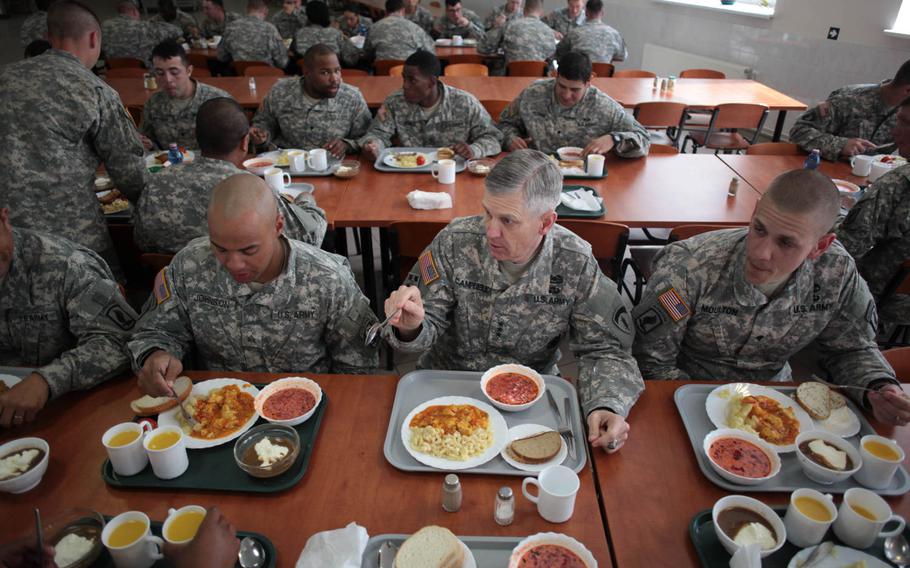 Lt. Gen. Donald Campbell Jr., commander of U.S. Army Europe, center, eats lunch with soldiers of the 173rd Infantry Brigade Combat Team in Adazi, Latvia, where a company of American soldiers deployed last week to reassure the NATO ally of the U.S. commitment to its security in the wake of Russia's actions in Ukraine. (Matt Millham/Stars and Stripes)

ADAZI TRAINING AREA, Latvia — U.S. and Latvian forces are a week into learning the basics about each other, shooting each other’s weapons, comparing their home lives and discussing favorite sports teams. One thing that nobody seems to be talking about, though: Russia.

Roughly 120 American soldiers from the 173rd Infantry Brigade Combat Team arrived here last week to train with Latvian soldiers and reassure the country of the U.S. commitment to the region in the wake of Russia’s land grab moves in Ukraine.

Latvia, which regained independence with the breakup of the Soviet Union in 1991 after nearly five decades under communism, has labored to buffer itself from Russia, becoming a member of the European Union and joining NATO in 2004.

The alliance all but guarantees Latvia’s allies would come to its aid were Russia to try to do here what it has already done in Ukraine.

Still, some remain wary, and for society here in general, the arrival of the American paratroops is “appreciated a lot,” Col. Martin Liberts, commander of Latvia’s sole infantry brigade, said.

Lt. Gen. Donald Campbell Jr., the commander of U.S. Army Europe who visited 173rd paratroops in Latvia and Lithuania on Tuesday and Wednesday, said he’d spoken with both countries’ defense ministers, and both said they wanted U.S. troops on their soil because their presence guaranteed that Russia wouldn’t attack.

“I’m an execution guy,” Liberts said. “So we are preparing for tough missions, but not exactly for one particular war.”

“I’m not a political analyst,” said 1st Lt. Ryan Johnson, a 173rd platoon leader from Rancho Cucamonga, Calif.. “I wish I was, that’d be great. I’m a soldier.”

Johnson was one of roughly 60 paratroops of the 173rd’s Company A, 1st Battalion, 503rd Infantry Regiment, taking part in a stress shooting exercise alongside dozens of Latvians on Wednesday. The exercise teamed Americans and Latvians in pairs and ran them through a timed trial of physical exercises — sprinting a quarter-mile with a gas mask, then dragging a simulated casualty hundreds more yards. That was interspersed with marksmanship challenges with pistols, rifles and machine guns.

“We’re going to be working together throughout this whole training rotation,” said Spc. Clinton Welding, an infantryman from Laguna Vista, Texas. The Americans and Latvians have had plenty of conversations since arriving here April 24, he said, but they hadn’t gotten into politics. It’s always there, of course, “but it’s never that fun to talk about.”

What the deployment is about “for me, from my picture of it, is training,” Johnson said, “regardless of whatever’s going on.”

For the most part, the joint training had been on the Latvians’ calendar for more than a year, Liberts said. The crisis in Ukraine hasn’t affected that training schedule.

The arrival of the U.S., however, brings opportunities for more diverse training than the Latvians are accustomed to.

Latvia’s land forces number roughly 1,000 personnel. The deployment here of one American company – one of the smallest and most basic units in the U.S. Army – increases the country’s total land force by more than 10 percent.

That small American force will soon be augmented by assets the Latvians lack, such as planes and helicopters to conduct airborne operations — the bread and butter of the 173rd.

“Everything I’ve heard from them is, ‘Are we going to fly? Are we going to jump? Are we going to bring helicopters in?’ ” Johnson said. “They’re soldiers; they’re just like us” in wanting to know what opportunities they’re going to have and what the next day’s training is going to entail.

Helicopters are on the way, Johnson said.

Meanwhile, the Americans are eager to take advantage of the Latvian training areas, which are unlike anything they have access to at their home base in Italy. There, the 173rd has to either drive for hours to get to a training site in Italy or cross borders to train in Germany. Coordination for either has to be arranged months or even a year in advance.