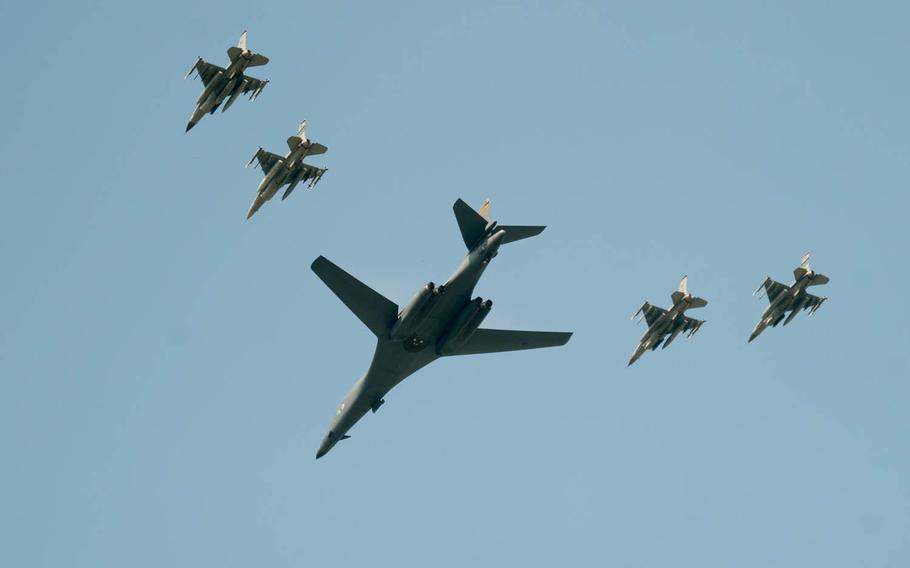 SEOUL, South Korea — The United States landed a B-1B Lancer in South Korea for the first time in 20 years Wednesday, labeling it the “closest flight ever to North Korea” by the supersonic bomber.

It was the second aerial show of force since the North conducted its most powerful nuclear test earlier this month in tit-for-tat actions on the already-tense peninsula.

A pair of Air Force B-1B Lancers, accompanied by seven South Korean and U.S. fighter jets, flew over Osan Air Base, about 40 miles south of Seoul. The flights came a day after North Korea claimed it successfully tested a powerful new rocket engine that could launch satellites.

One of the bombers landed at the base; U.S. Forces Korea declined to say how long it would remain there.

The North conducted its fifth underground atomic blast on Sept. 9, ignoring international condemnation and sanctions imposed after the previous nuclear test in January. Those, combined with an uptick in missile tests this year, have raised fears that Pyongyang is making faster-than-expected progress toward its stated goal of developing a nuclear-tipped missile that could reach the U.S. mainland.

The U.S. Air Force said it was the first time the bomber has landed on the Korean peninsula since 1996.

“Today marks the first time the airframe has landed on the Korean peninsula in 20 years, as well as conducting the closest flight near North Korea ever,” it said in a separate press release.

“What we are showing today is just one tool we have to choose from a wide array of options,” Bergeson was quoted as saying. “The alliance grows stronger every day, and we remain prepared to defend and to preserve the security of the Korean Peninsula and the region.”

“Should the enemy provoke us once again, the Combined Air Forces will respond and eliminate their will and capability to fight,” he said.

The U.S. also sent two of the bombers, each accompanied by four South Korean and U.S. fighter jets, in a flyover of Osan four days after the most recent nuclear test. North Korea called that a bluff and said such actions were pushing tensions to the “point of explosion.”

The four-engine supersonic jet, which is based at Andersen Air Force Base in Guam, was designed for nuclear capabilities but switched to an exclusively conventional combat role in the mid-1990s, according to Boeing’s website.

Some 28,500 U.S. servicemembers are stationed in the South as the peninsula remains technically at war after the 1950-53 conflict ended in an armistice instead of a peace treaty.

The growing threat from North Korea has prompted the alliance to agree on deploying an advanced U.S. missile defense system known as THAAD in the South by the end of next year.

Many South Koreans in the southeastern region have protested the plans, fearing its placement will make them a target and harm the local economy.

North Korea appeared to try to play on those fears Wednesday, threatening to target the anti-missile battery with nuclear strikes.

"If THAAD is deployed in South Korea, it will be exposed to nuclear strikes here and there as the primary target,” KCNA said Wednesday. "All Koreans should never allow the Park group to deploy THAAD in South Korea.”