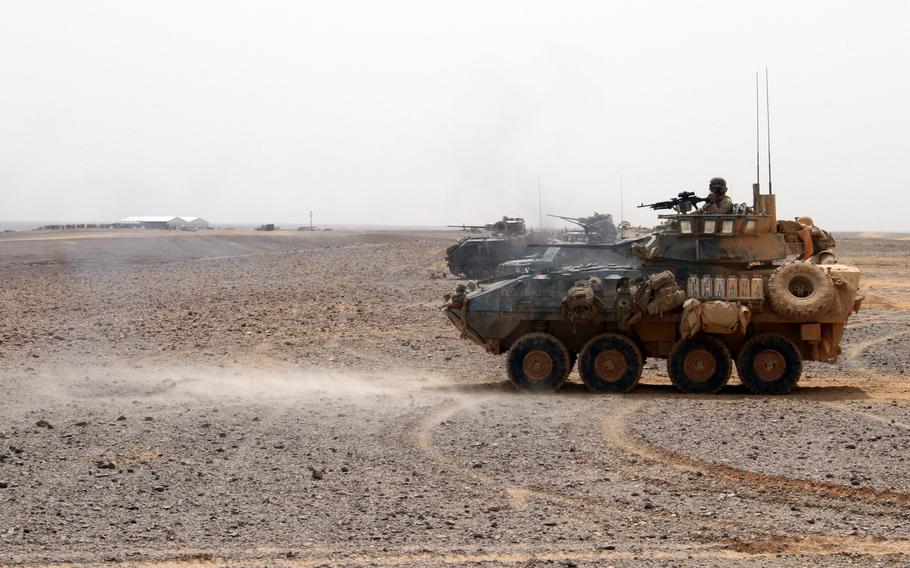 A U.S. Marine light armored vehicle fires at a target during a live-fire demonstration for dignitaries and the media Thursday, June 5, 2014, in Jordan. (Hendrick Simoes/Stars and Stripes)

A U.S. Marine light armored vehicle fires at a target during a live-fire demonstration for dignitaries and the media Thursday, June 5, 2014, in Jordan. (Hendrick Simoes/Stars and Stripes) Dust kicks up around a U.S. Marine light armored vehicle from the 22nd Marine Expeditionary Unit as it prepares for a live-fire demonstration for dignitaries and the media June 5, 2014, in Jordan. (Hendrick Simoes/Stars and Stripes) U.S. and Jordanian Special Forces storm the dock and battle enemy role-players, during a demonstration for the media and civilian observers, in Aqaba, Jordan, Thursday, June 5, 2014. The demonstration was part of the Jordanian-led Eager Lion exercise involving 22 nations and 12,000 personnel. (Hendrick Simoes/Stars and Stripes)

JEBEL PETRA, Jordan — Moments after fighter aircraft pummeled the exercise area with bombs, U.S. Marine and Jordanian armored vehicles advanced into it while low-flying AH1-F Cobra attack helicopters zoomed past them to provide cover. Each action was precise, taking place on cue.

Brig. Gen. Gregg Olson, commander of Task Force 51/59 and in charge of the amphibious forces deployed to U.S. 5th Fleet, commanded the American contingent during the drill, which marked the culmination of the two-week exercise involving 12,000 military personnel from 22 nations — 6,000 of them from the U.S.

The exercise is seen as a show of support for Jordan, a longtime ally, at a time of escalating sectarian bloodshed in neighboring Syria and Iraq. Washington has been seeking to shore up Jordan — which already hosts about 600,000 Syrian refugees — both economically and militarily, providing $1 billion in loan guarantees in addition to the $1.25 billion in regular annual assistance. Last year, the U.S. deployed F-16 fighter-bombers and Patriot missile interceptors to Jordan to boost its military capabilities.

U.S. officials acknowledged that the demonstration Thursday was somewhat artificial compared to how it would play out in real life. But those involved in planning the drill said the intent is to enhance the Jordanian and U.S. militaries’ understanding of each other’s capabilities, proving both countries’ armed forces are able to operate together.

Olson said all the combat techniques employed were the same as in a real battlefield situation.

“I think what was important for our partners yesterday is they were able to see them in a demonstration that was both tactically sound and provided the opportunity to observe.

“The battlefield is a lonely place. ... Every time that we can show the value we give back, the valor, the aggressiveness, the capabilities of our young men and women that make up our ranks, that’s a great opportunity,” Olson said.

The scenario for this main event was a simulated counterattack against an enemy country that had sent its forces across the border. No specific nations were mentioned, although the scenario appeared realistic in view of the civil war in neighboring Syria.

The use of combined air power and ground forces for the counterattack demonstration wasn’t just for show.

“There’s a misconception that you can do it all with air power. It takes a combined arms team to actually secure the terrain,” said Maj. Dave Denial, an exercise planner.

This is the fourth annual iteration of the Eager Lion exercise in Jordan. Since its start on May 25, participants have trained on a wide range of offensive and defensive operations that include disaster relief, strategic communication and rescue operations. The Jordanian-led exercise runs until Sunday.

U.S. officials emphasized that there was no connection between the Eager Lion exercise and any potential increase in U.S. assistance to the Syrian opposition, which has been faring poorly in recent fighting against the government forces of President Bashar Assad.

In a speech at the U.S. Military Academy at West Point last week, President Barack Obama said he would work with Congress to ramp up support for those in the Syrian opposition “who offer the best alternative to terrorists and a brutal dictator.”

“We are not involved in that,” Maj. Gen. Robert Catalanotti, the U.S. Central Command director of exercises and training, told reporters. “This exercise brings 22 nations together, in a unified way, to build military-to-military relations.”