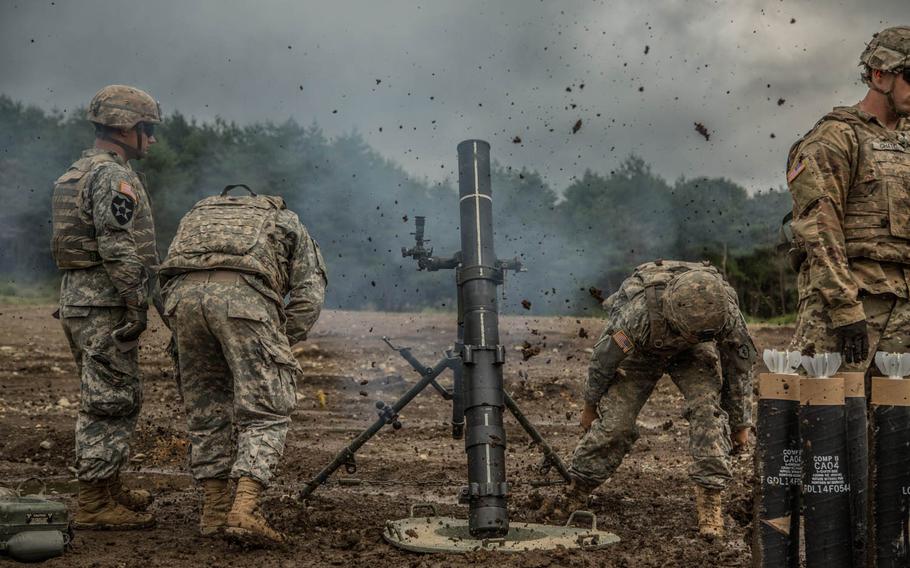 A servicemember from the Japan Ground Self-Defense Force takes part in an urban warfare exercise at Aibano Training Area near Osaka, Japan, Sunday, Sept.18, 2016. The exercise was part of annual Orient Shield drills between the U.S. and Japan. (Elizabeth Scott/U.S. Army)

U.S. and Japanese troops have been firing mortars and machine guns and conducting simulated attacks in armored personnel carriers and helicopters during annual Orient Shield drills near Osaka, Japan.

The exercise, which began Aug. 29 as part of the Army’s Pacific Pathways initiative, allows both militaries to assess their readiness to cooperate with each other, said Col. Robert Ryan, 3rd Brigade commander.

“The best part about the exercise is that a soldier is a soldier and a leader is a leader,” he said via email. “And they get after the fundamentals and the foundation of what we are, whether we are infantry, artillery, mortars, food service or logistics.”

The Americans are training alongside Japan Ground Self-Defense personnel from the 36th Infantry Regiment.

Orient Shield — which includes bilateral medical drills and live-fire exercises — wraps up Wednesday after field training at the Aibano Training Area. Participants are conducting a simulated mission to seize an objective with light infantry supported by the Strykers, Opperude said.

Other Japanese troops training in Washington state this month during a reverse Pathways mission that brings foreign servicemembers to the U.S. from the Pacific, he said.