US, Japanese carriers link up for training in contentious South China Sea 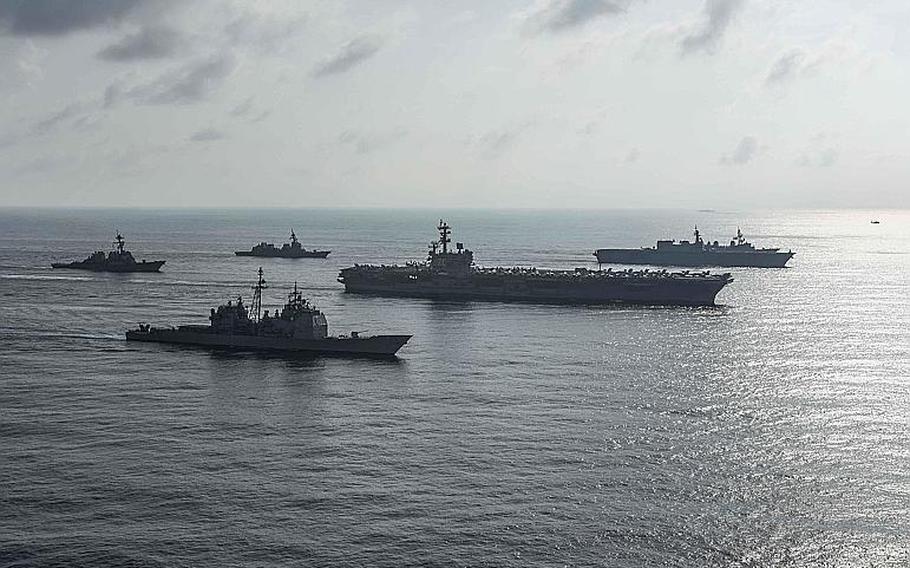 YOKOSUKA NAVAL BASE, Japan — Several U.S. and Japanese ships recently trained together in the contentious waters of the South China Sea.

The Ronald Reagan and the Kaga — one of Japan’s two new helicopter carriers — deployed from Yokosuka last month to patrol a region that is wrought with tension over China’s militarization of artificial South China Sea islets and an ongoing dispute between Tokyo and Beijing over the sovereignty of the Japan-controlled Senkaku island chain.

Navy officials referred to the Ronald Reagan strike group’s deployment as a “patrol,” while the JMSDF described their two-month journey through the South China Sea and Indian Ocean as a “training mission.” A JMSDF spokesman last month told Stars and Stripes he hoped the mission would contribute to a “free and open” Indo-Pacific region.

“The teamwork and professionalism I have experienced by both [Task Force 70] and JMSDF sailors during this training operation has truly demonstrated how seamlessly we can integrate with our Japanese allies,” Thomas said in the statement.

The Kaga is scheduled to return to Yokosuka in October. The Navy does not announce movement plans for its vessels.