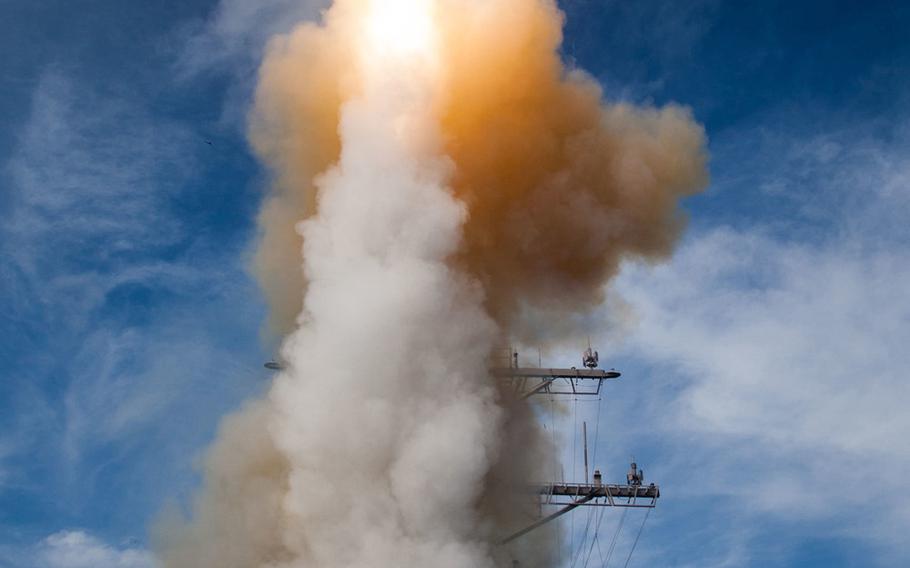 FORT SHAFTER, Hawaii — The U.S., Japan and South Korea are conducting their first joint ballistic missile defense exercise in Hawaii that is aimed as much at fostering cooperation between the two Asian neighbors as preparing for a possible North Korean attack.

Participants of the Pacific Dragon exercise, which is expected to conclude Tuesday, include guided-missile destroyer USS John Paul Jones, destroyer USS Shoup and the Pacific Missile Range Facility on the island of Kauai, according to a Navy spokesman.

Naval vessels with the Japan Maritime Self Defense Force and South Korea Navy, in Hawaii for next month’s Rim of the Pacific exercise, are the other participants.

The Navy provided no further details. An official with the South Korea Ministry of National Defense told reporters Monday that among the three warships that South Korea sent to RIMPAC was the Aegis-equipped Sejong the Great destroyer.

Navy assets from the three countries will primarily share information that’s needed to detect and track the launch of an enemy’s missile, but the drill will not include actually firing interceptor missiles, the ministry official said.

Aegis is the Navy’s primary anti-missile system, which is also used by South Korean and Japanese naval ships.

The antimissile drill slated for Tuesday is based on a hypothetical missile launch by North Korea, the ministry official said.

North Korea has conducted numerous missile tests this year. The most recent – and possibly most successful of its medium-range launches – came Wednesday when a Musudan missile flew about 800 miles high before coming down in the Sea of Japan.

The North has promised more missile tests, while at the same time trying to perfect a miniaturized nuclear weapon that could one day be mounted on such a missile.

Pacific Dragon is a positive step forward in the trilateral relationship, but it also underscores the chasm between Japan and South Korea, which have yet to move past territorial disputes and a history of war.

South Korea and Japan will not directly exchange information during the drill and will instead use the U.S. as a “middleman,” the South Korean ministry said.

James Hackett, a senior fellow at the London-based International Institute for Strategic Studies, wrote earlier this month that it remains unclear whether this inaugural trilateral exercise will actually advance cooperative capability.

North Korea’s missile developments appear to be an area suitable for real progress in this trilateral relationship, he said.

“After all, as well as the commonly perceived dangers from North Korean missile developments, there are some similarities in assets,” including Aegis and other anti-missile systems, he said.

But how much this year’s Pacific Dragon will enhance missile-defense cooperation between the three countries depends a lot on the exercise program itself, particularly how much Japan and South Korea interact, he said.

Hackett noted that Defense Secretary Ash Carter has called it a “missile warning” exercise that is “designed to check the three countries’ capacity to track ballistic missiles and share relevant information, involving their Aegis destroyers.”

And while that’s a far cry from shooting down intercontinental test missiles, exercises such as Pacific Dragon that “incrementally develop trust and cooperation” might be what is needed at this stage, he said.