US, Japan move into final stretch of ‘largest and most complex’ field exercise 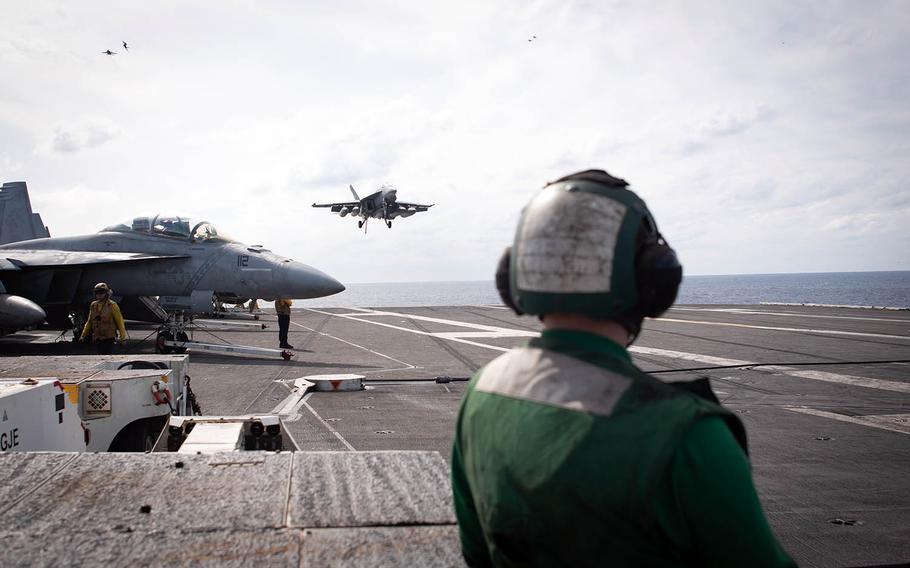 Buy Photo
A hook-runner awaits the landing of an F-18 Super Hornet aboard the USS Ronald Reagan during Keen Sword drills at sea, Saturday, Nov. 3, 2018. (James Bolinger/Stars and Stripes)

Buy Photo
A hook-runner awaits the landing of an F-18 Super Hornet aboard the USS Ronald Reagan during Keen Sword drills at sea, Saturday, Nov. 3, 2018. (James Bolinger/Stars and Stripes) 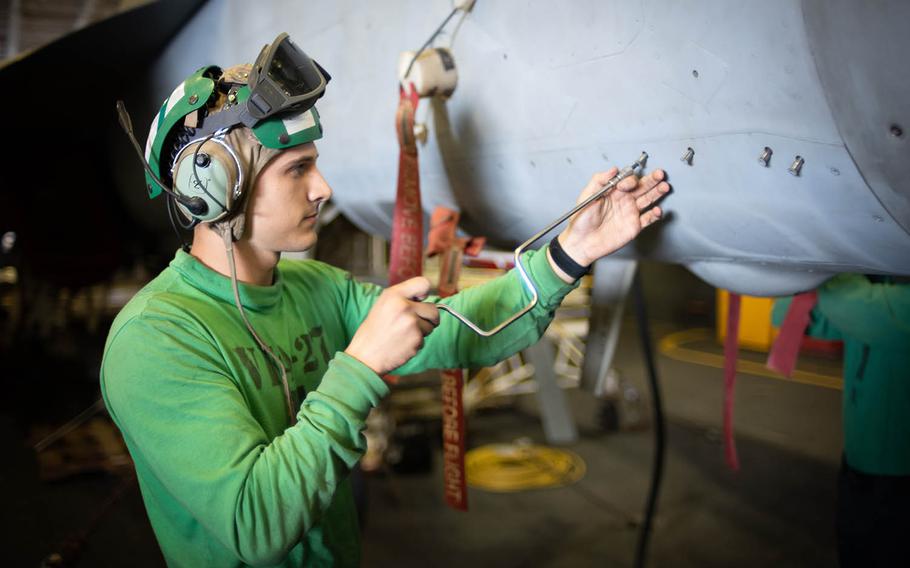 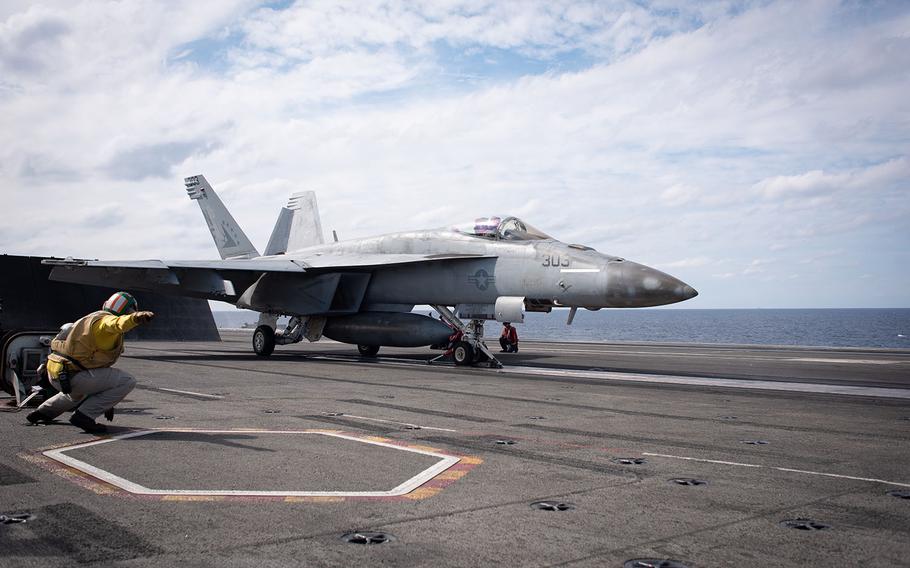 Buy Photo
An F-18 Super Hornet prepares to take off from the flight deck of the USS Ronald Reagan during Keen Sword drills, Saturday, Nov. 3, 2018. (James Bolinger/Stars and Stripes) 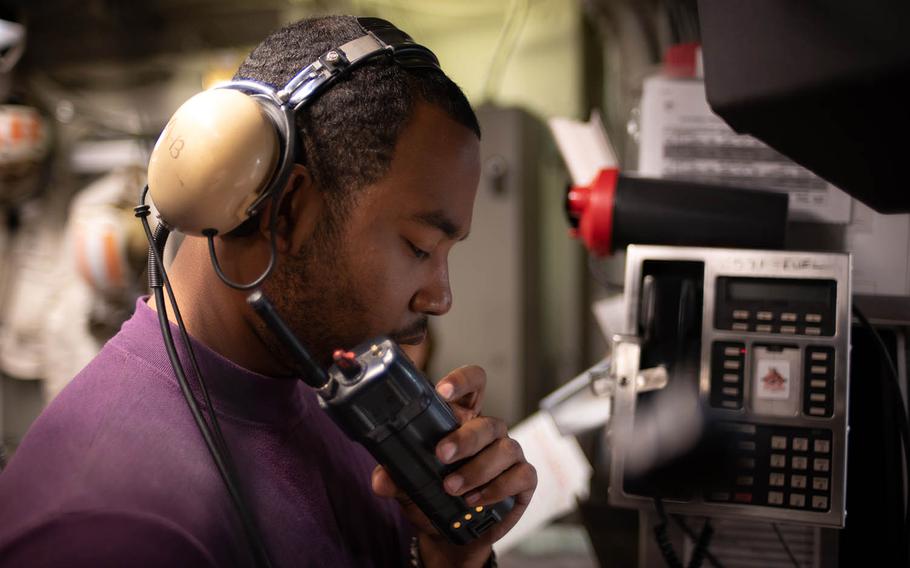 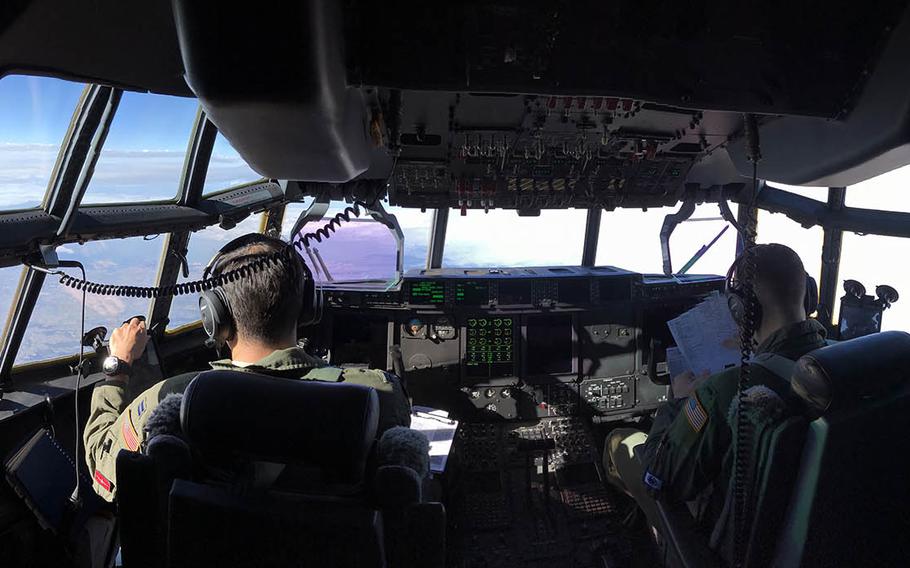 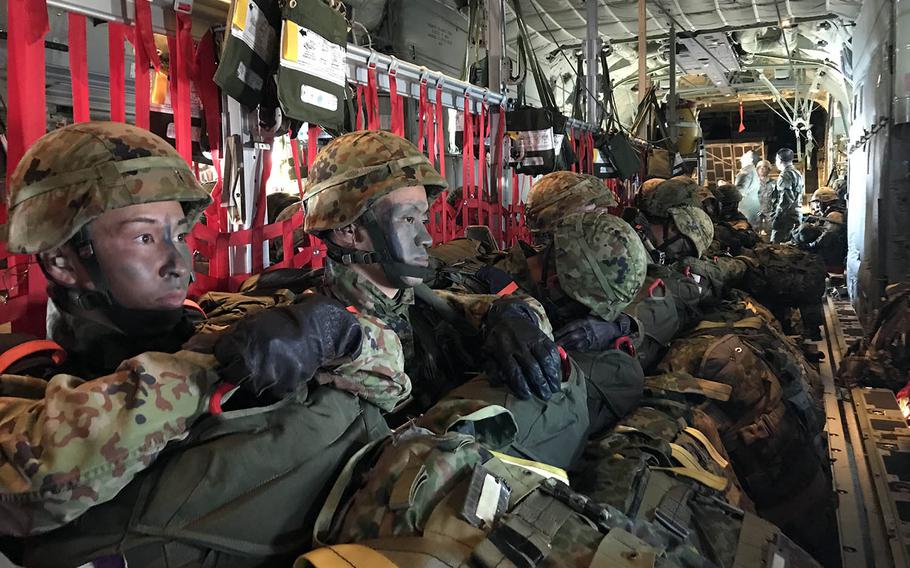 YOKOTA AIR BASE, Japan — The U.S. and Japan are in the final stretch of a large, complex field training exercise that has 10,000 American servicemembers drilling alongside 47,000 Japanese troops on land, in the air and at sea.

Keen Sword, a biennial event designed to increase the combat readiness of the allies’ military forces, comes amid territorial and trade tensions with China and efforts to make peace with nuclear-armed North Korea.

There are 11,000 more troops involved in the exercise over last year, including about a fifth of Japan’s Self-Defense Forces participating.

Keen Sword is the “largest and most complex” exercise the allies have conducted, U.S. Forces Japan commander Lt. Gen. Jerry Martinez said of the exercise, which kicked off Oct. 29 and ends Friday.

“On behalf of the 54,000 men and women of U.S. Forces Japan, I am proud to be a part of this Alliance that is so essential to our two nations’ shared interests,” he said in a statement.

The Japan Ground Self-Defense Force’s new amphibious brigade is involved in the drills for the first time and will conduct beach landings near Guam and Tinian, according to a Navy statement.

Marines from the 3rd Marine Expeditionary Force will work alongside the brigade, serving as mentors. Canada is also participating for the first time, with two Royal Canadian Navy ships involved, the Navy said.

In recent days, Yokota — home of USFJ in western Tokyo — has been guarded by surface-to-air missiles while armed airmen in gas masks stand near gates and sirens sound alarms as part of the drills.

However, much of Keen Sword is taking place far from the Japanese capital at ground ranges, in the air, and at sea.

On Sunday a pair of C-130J Super Hercules aircraft flew from Yokota to Tsuiki Air Base in Fukuoka prefecture to collect 80 Japanese paratroopers. Army paratroopers from Alaska were on board to help make the jump go smoothly.

Air Force Capt. Jeff Larkin, mission commander for 374th Airlift Wing aircraft and personnel involved in Keen Sword, said it was the first time his unit had dropped Japanese paratroopers on Japanese soil, although they recently did a similar exercise in Alaska.

“We don’t always get the opportunity to drop Japanese forces,” he said.

The Japanese paratroopers waited patiently during an hourlong flight to the drop zone, then leapt out a side door after a countdown by U.S. personnel, who quickly hauled in their static lines.

Staff Sgt. Brian Gates, a loadmaster on one of the Super Hercs, said the training simulated getting troops to an area without an airfield.

Off the coast of Japan on Saturday, the flight deck of the USS Ronald Reagan was orchestrated chaos as F-18 Super Hornets took off every minute or so in support of Keen Sword’s anti-submarine warfare drills.

The bridge of the aircraft carrier was equally busy with servicemembers from three nations — the U.S., Japan and Canada — coordinating ships and aircraft.

Exercises like Keen Sword improve capability across all the navies in the region, helping to provide stability there, he said.

“Our work with Japan, with the Philippines, with all the navies in this part of the world is about stabilizing,” he said.

Rear Adm. Hiroshi Egawa, commander of a Japanese escort flotilla involved in the drills, told reporters on the carrier the exercise would hone the mutual response capabilities of the U.S. and Japan.

“[The Japan Maritime Self-Defense Force] will firmly do its job with the United States,” he said when asked about the role of the Aegis Ashore missile-defense system that Japan plans to introduce.

Keen Sword, which dates to 1986, is held biennially, alternating between the field drills and the Keen Edge command post exercise.