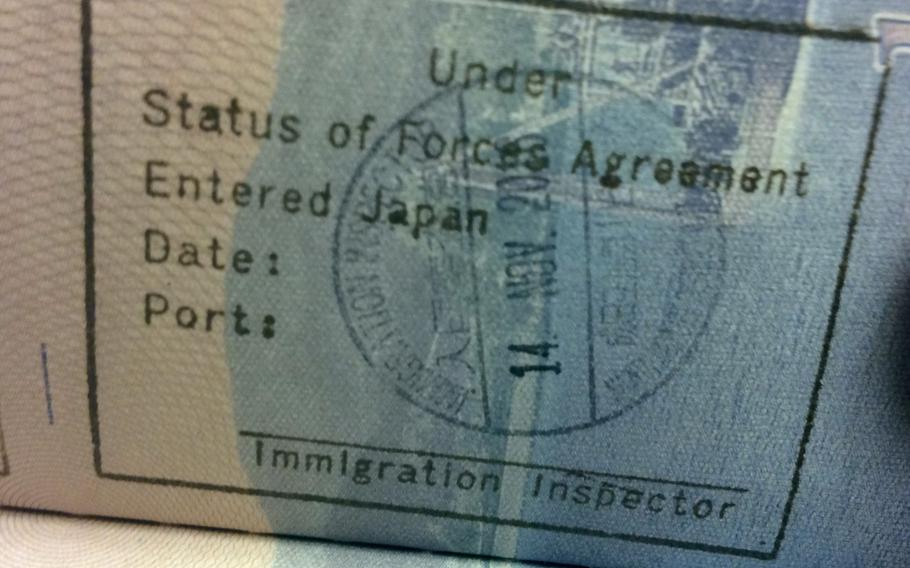 Buy Photo
The United States and Japan signed a deal in Tokyo on Jan. 16, 2017, that will mean visa eligibility changes for some U.S. base contractors working in Japan. (Erik Slavin/Stars and Stripes)

TOKYO — The United States and Japan signed an agreement Monday that could end Status of Forces Agreement coverage for some military contractors without specialized skills.

The SOFA supplemental agreement negotiations were made public last year, shortly after a former Marine working as a cable company employee in Okinawa was arrested on charges that he raped and killed a 20-year-old Japanese woman.

During a visit to Okinawa, Prime Minister Shinzo Abe called it “questionable” that the accused employee was SOFA-sponsored.

While SOFA does not prevent U.S. personnel who commit crimes off-base from being prosecuted, it does in many cases allow them to remain in U.S. custody pending trial.

The agreement establishes a working group that will review whether contractors meet new SOFA standards.

“Such criteria are to be established so that those who are eligible to receive designation as members of the Civilian Component have skills or knowledge required for the accomplishment of mission requirements,” the agreement states.

Defense Department civilian public employees under the appropriated and non-appropriated funding systems retain SOFA rights under the agreement, as do civilians aboard U.S. military vessels and aircraft.

Non-DOD federal workers arriving in Japan to work with the military still have SOFA coverage, according to the agreement.

SOFA also includes services employees in Japan on official business solely related to the military, such as the United Services Organization, the American Red Cross and base financial institutions.

Private contractors must be officially invited to Japan by the U.S. government for official purposes only in order to get a SOFA visa.

The contractor must be “essential to the mission of the United States armed forces and [have] a high degree of skill or knowledge for the accomplishment of mission requirements,” according to the agreement.

The criteria can include specialized training or education, security clearance, professional licensing, short-term need or other reasons “specially authorized” by the U.S.-Japan Joint Committee.

Contractors considered “ordinarily resident” in Japan, or who already have a non-SOFA visa, will be denied SOFA status, according to the agreement.

When the U.S. terminates SOFA status, the contractor will have up to one year to either change their status or leave Japan, according to the agreement.