US, Japan agree on access to bases following environmental incidents 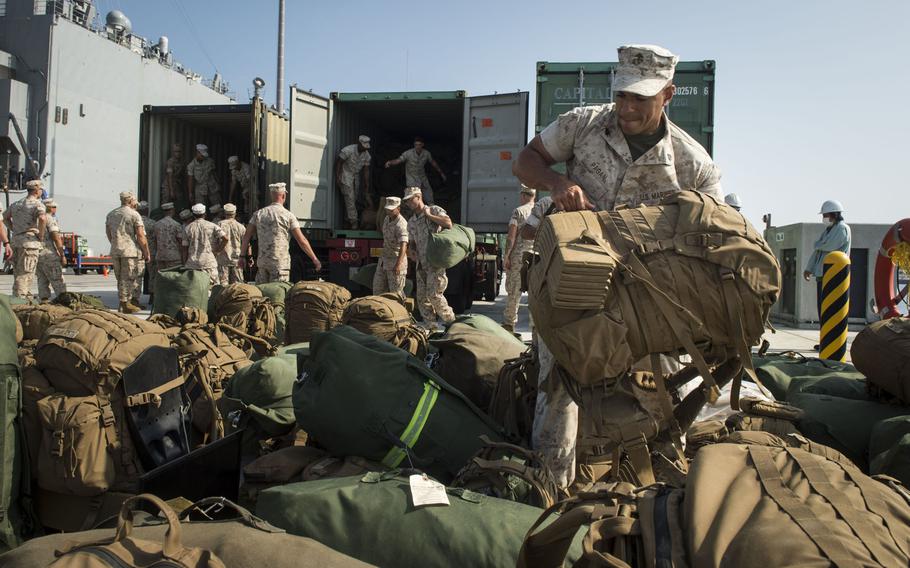 Marines assigned to the 31st Marine Expeditionary Unit on Okinawa prepare to embark the USS Germantown in September 2014. Under a new agreement, Japanese officials will have access to U.S. military bases in Japan following oil spills and environmental accidents. (Raul Moreno Jr./U.S. Navy)

TOKYO — Japanese officials will have access to U.S. military bases in Japan following oil spills or other environmental accidents, according to a bilateral agreement struck as part of the ongoing realignment of U.S. forces in the Asia-Pacific region.

The supplement to the Status of Forces Agreement also grants base access to Japanese inspectors when surveying land that will be returned to the Japanese government, according to a U.S.-Japan statement issued Monday afternoon.

Although the two countries did not release the full accord Monday, they announced in a joint statement that “substantial agreement has been achieved on an agreement.”

Lack of acceptable protocol over environmental issues has long been a point of contention in Okinawa, the strategic island where about half of all U.S. military personnel in Japan are stationed.

Prefectural officials have cited concerns over the quality of land they will receive as the U.S. military lightens its footprint, which Okinawa government documents cite as encompassing 18.4 percent of the island’s total land.

Concerns rose after empty chemical drums excavated on former U.S. military property this year were suspected to contain Agent Orange, a Vietnam War-era defoliant associated with severe health hazards and birth defects. A Japanese government report found no evidence of Agent Orange or local health risk, though it did find common herbicide compounds in the soil.

As part of the new supplemental agreement, the U.S. will maintain its Japan Environmental Governing Standards, which generally adopt “the more protective” of United States, Japan, or international agreement standards, according to the statement.

The statement Monday also reiterated the two nations’ commitment to closing Marine Corps Air Station Futenma and replacing it with a new base on a rural part of the island. The plan is opposed by many on Okinawa who want the base moved off the island entirely, but favored by Prime Minister Shinzo Abe’s ruling government.

Military officials have stated that moving the air station off-island would be crippling from a strategic and operational standpoint.

“The plan to construct the Futenma Replacement Facility at Camp Schwab-Henokosaki area and adjacent waters is the only solution that avoids the continued use of Marine Corps Air Station Futenma,” according to Monday’s statement.

The broader realignment agreement also requires the U.S. to move thousands of Marines currently based on Okinawa to Guam, though much of the funding for that move has been held up in Congress because of cost concerns.

A master plan detailing the Guam move’s costs, which are being shared by Japan, has been submitted to Congress and is expected to go through final reviews next year.