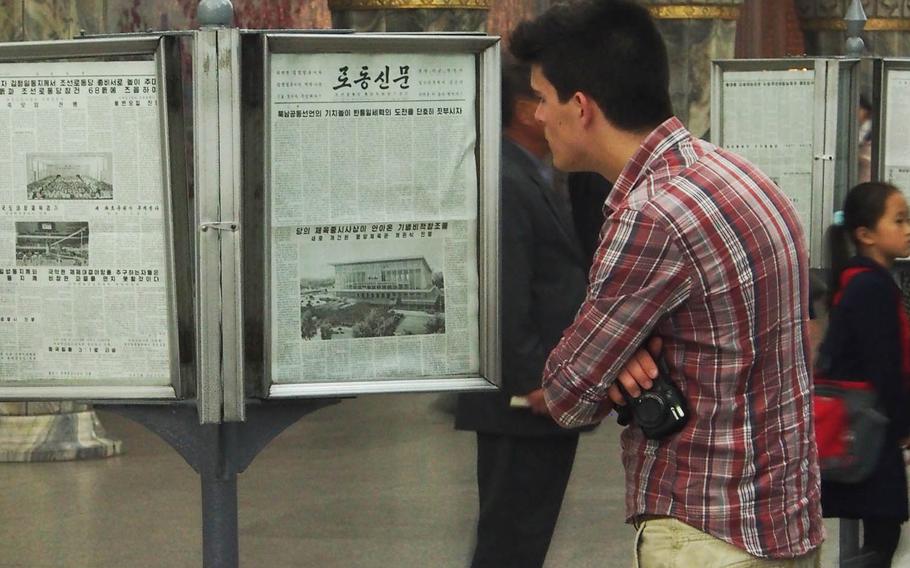 A tourist reads the state-run Rodong Sinmun newspaper at Yonggwang Metro Station in Pyongyang, North Korea. The U.S. State Department has issued a strongly worded and unusually detailed warning advising Americans not to visit North Korea, pointing to rising tensions on the divided peninsula and the detention of several foreigners in recent years. (Courtesy of Clay Gilliland/Wikicommons)

SEOUL, South Korea — The U.S. State Department has issued a strongly worded and unusually detailed travel warning for North Korea, pointing to rising tensions on the divided peninsula and the detention of several foreigners in recent years.

The North has sentenced two Americans to prison with hard labor in recent months, including a 21-year-old University of Virginia student who allegedly stole a propaganda poster from his hotel in Pyongyang.

The State Department urged Americans to avoid all travel to North Korea because it imposes “unduly harsh sentences, including for actions that in the United States would not be considered crimes.”

It said at least 14 U.S. citizens have been detained in the past decade.

The warning issued Monday went on to list actions that have been targeted “whether done knowingly or unknowingly,” including showing disrespect to the Kim family dynasty that has ruled the country since it was founded; proselytizing or carrying out religious activities; or possessing media critical of the government.

It also warned that being in a tour group or using a tour guide won’t protect visitors from arrest.

State Department spokesman John Kirby acknowledged the warning was more detailed than usual and said it would be updated every three months instead of every six months as in the past.

“I think that … makes a lot of sense because of the increase in tensions that we’re seeing there on the peninsula and because of the provocative activity by the regime there,” he told reporters at a briefing in Washington.

The warning comes just over two weeks after North Korea sentenced a South Korean-born American citizen, Kim Dong Chul, to 10 years in prison with hard labor on charges of subversion and espionage.

In March, the North sentenced Otto Frederick Warmbier, a University of Virginia student, to 15 years with hard labor for allegedly taking a propaganda poster.

Tensions also have spiked over the North’s nuclear weapons program after it staged an atomic test in January followed by a long-range rocket launch, prompting tougher U.N. sanctions.