US: Iraq Kurdish referendum distracting from mission to defeat ISIS 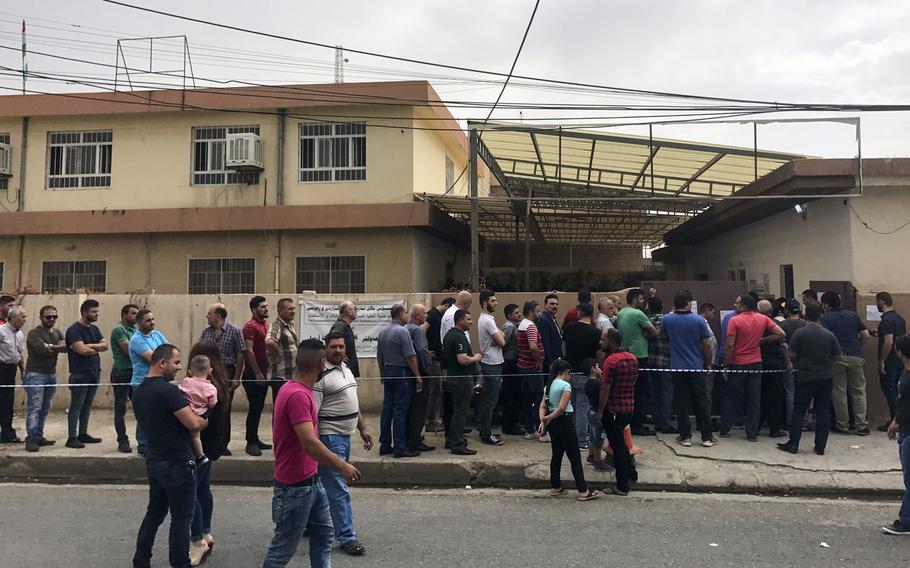 Voters line up to cast their ballots in the Iraqi Kurdistan region's independence referendum on Monday, Sept. 25, 2017, in a suburb of the region's capital of Irbil. (Chad Garland/Stars and Stripes)

WASHINGTON — Mounting tensions between Iraq’s government and the nation’s Kurdistan region after the semi-autonomous northern region voted overwhelmingly this week for independence have distracted fighters from their mission to defeat Islamic State militants, a U.S. military spokesman said Thursday.

The Iraqi central government’s demand that Kurdish officials by Friday relinquish control of their airports, including ones from which anti-ISIS combat missions are flown, have yet to impact U.S.-led coalition operations, said Army Col. Ryan Dillon, a spokesman in Baghdad for Operation Inherent Resolve. But he warned it could cause problems as the Iraqis clear the final pockets of ISIS fighters from the country.

“Prior to the referendum, there were no questions about where the focus was from the Iraqi security forces,” Dillon told reporters Thursday at the Pentagon. “That focus, which used to be like a laser-beam on ISIS, is now not 100 percent there. There has been an effect on the overall mission to defeat ISIS in Iraq as a result of the referendum.”

The United States did not support the Kurdistan Regional Government’s referendum held Wednesday, asking its leadership to delay any such vote for independence until after the defeat of ISIS was complete. Military officials expect ISIS to be cleared from its remaining territory in Iraq — in Hawija and Shirqat in northern Iraq and in western Anbar province along the Euphrates River near Syria — within six to eight months.

For now, the dual-front operations targeting ISIS in those areas continue as planned, Dillon said. Iraqi security forces completed the first phase of operations around Hawija and Shirqat this week, clearing 1,500 square kilometers of territory and liberating 100 villages around the towns, he said. That portion of the operation was expected to last more than a week but has been completed.

Kurdish peshmerga fighters were not directly involved in either operation, Dillon said. However, they are expected to be needed to help eliminate any ISIS fighters that attempt to flee north toward their territory, a role that they have taken in several other battles across northern Iraq.

Dillon said he believed the Iraqi forces and the peshmerga were still working together as expected, but he added further rhetoric between politicians for the two groups could threaten the ISIS operations.

For the coalition, which flies combat missions against ISIS and trains Iraqi and peshmerga fighters, the referendum has forced some of its military planners to explore contingency plans for a series of problems the referendum could cause, including the loss of access to airports or the potential for clashes between the two sides. Dillon said he was unaware of any options the U.S. military was exploring now.

“We have to plan out the ‘what ifs’,” he said. “We have planners who try to predict and plan for potentials. So, that’s where some of our efforts and our brainpower had gone after the referendum.”

Kurdistan Regional Government President Masoud Barzani has said the referendum was nonbinding and was only intended to jump-start negotiations with the Iraqi government for Kurdistan’s eventual independence.

However, Iraqi Prime Minister Haider al-Abadi has rejected any notion of full independent for the Kurdistan Regional Government.

“We will impose the rule of Iraq in all of the areas of the KRG, with the strength of the constitution,” he said Wednesday. “There will be no fighting between the sons of one country, but we will impose the law, you will see.”