US, Iraq consider more troops to fight for Mosul 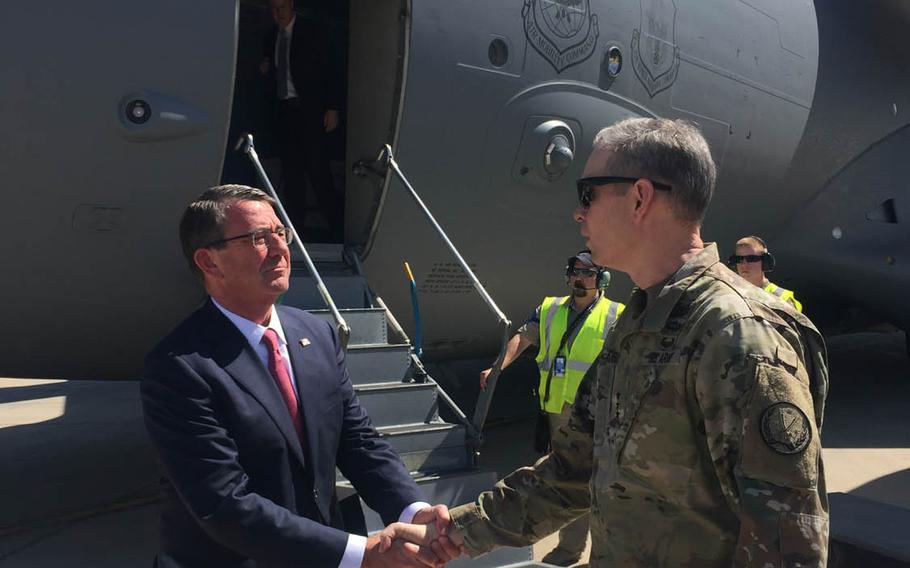 Secretary of Defense Ash Carter is greeted by Lt. Gen. Sean MacFarland as he arrives in Baghdad, Monday, April 18, 2016. Carter is there to discuss the possibility of sending additional U.S. troops and other support to Iraq as its army begins the fight for Mosul. (Tara Copp/Stars and Stripes)

Secretary of Defense Ash Carter is greeted by Lt. Gen. Sean MacFarland as he arrives in Baghdad, Monday, April 18, 2016. Carter is there to discuss the possibility of sending additional U.S. troops and other support to Iraq as its army begins the fight for Mosul. (Tara Copp/Stars and Stripes) 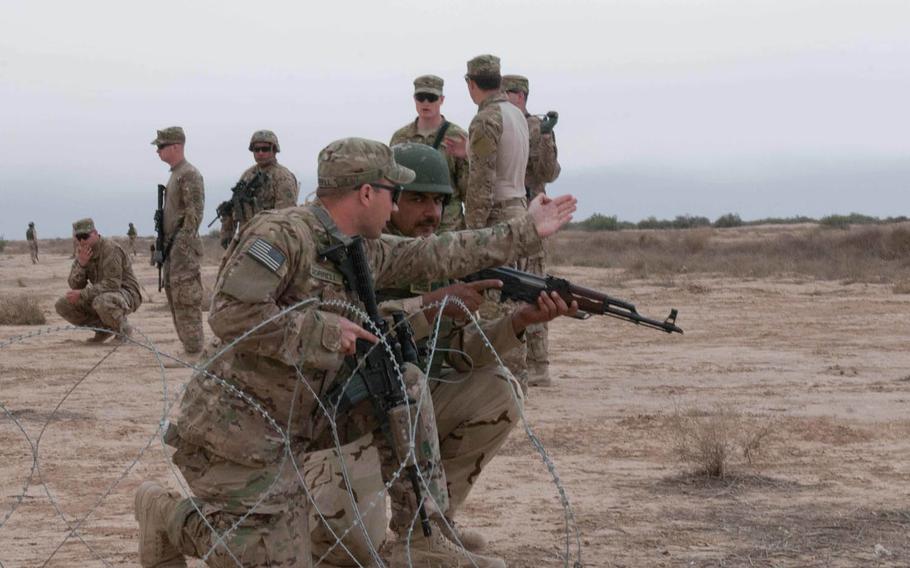 A U.S. soldier with the 82nd Airborne Division instructs an Iraqi soldier during a breach and assault training at Besmaya Range Complex, Iraq, in March 2015. Secretary of Defense Ash Carter arrived in Baghdad Monday, April 18, 2016, to discuss the possibility of sending additional U.S. troops and other support to Iraq as its army begins the fight for Mosul. (Deja Borden/U.S. Army)

BAGHDAD — Secretary of Defense Ash Carter arrived Monday in Baghdad to discuss the possibility of sending more U.S. troops and other support to Iraq as its army begins the fight for Mosul.

During the trip — Carter’s third as defense secretary — he plans to meet with Lt. Gen. Sean MacFarland, the U.S. commander of the coalition campaign against the Islamic State. He also will meet Iraqi prime minister Haider Al-Abadi and defense minister Khaled Al-Obeidi, and hold a conference call with Iraqi Kurdistan president Massoud Barzani.

His visit comes just days before President Barack Obama arrives in Saudi Arabia to discuss the military, political and economic support the U.S. and its Gulf Cooperation Council Arab allies can provide Iraq.

Iraq is struggling under low oil prices and a political crisis that threatens to weaken its army’s advance to retake Mosul. The importance of retaking the city, which the Islamic State captured in summer 2014 and is using as its de facto capital in Iraq, is part of what’s driving the requests to add more U.S. capabilities to the fight.

“Everyone knows the fight of Iraq is the fight for Mosul,” said a senior U.S. defense official who briefed reporters traveling with Carter. “Mosul is the end game in Iraq.”

The official said the U.S. is not suggesting a return to the large footprint of U.S. forces that were in the country until December 2011.

“We are not looking for a big footprint and the Iraqis certainly will be supportive of things that are directly connected to capabilities that they feel their soldiers need do the fight,” the official said. “That’s what we saw with Taqqadum ... the base outside of Ramadi that helped us help them take back Ramadi.”

Last June, after the Islamic State capture Ramadi, the White House announced it was sending 450 military personnel to al-Taqqadum Air Base in Anbar province. Al-Taqqadum is located just east of Ramadi and served as a base of operations for U.S. troops to reach out to Sunni tribal leaders and increase the numbers of Sunnis being trained and included in Iraq’s military.

The official suggested the recommendations would likely be for smaller additions of specific forces the U.S. thinks will help the Iraqi forces campaign against the Islamic State, but would not provide details.

Thousands of Iraqi troops from the army’s 15th Division are operating in the 70-mile swath between Makhmour and Mosul, as Iraqis with the assistance of U.S. Marines are clearing villages south of Mosul in preparation for that fight. U.S. Marines are operating out of a fire base by Makhmour and providing artillery support to the Iraqis. The base has already come under attack by the Islamic State, resulting in the death of Staff Sgt. Louis Cardin and injuries to eight other Marines.

Those Marines are likely to move forward and assume greater risk as Iraqi forces advance toward Mosul, a defense official said.

“[The Islamic State] is dug in there. It is going to get more dangerous. Unfortunately we had our first death,” the official said.

“I do expect that we’re going to accept more risk and we’re going to bring in resources as appropriate to protect and buy down that risk, absolutely,” the official said.

According to Pentagon figures, there are 3,870 troops deployed to Iraq; however, that figure does not include approximately 1,000 additional forces on temporary assignments or rotating through the country.

Obama, who campaigned on getting all U.S. forces out of Iraq, has seen U.S. presence regrow in an effort to help Iraq rebuild its military and fight the Islamic State.