US investigating claims of civilian deaths from airstrike in Afghanistan 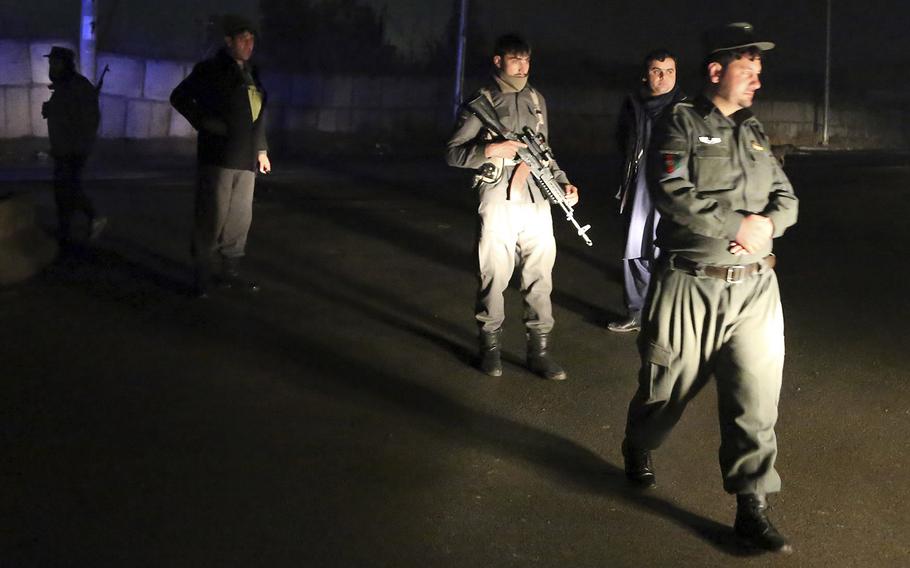 Security forces block the roads at the site of a suicide bomb attack in Kabul, Afghanistan, Wednesday, Nov. 28, 2018. Najib Danish, spokesman for Afghanistan's Interior Ministry, said the attack in Kabul took place when a suicide bomber detonated his explosives and then other insurgents started a gun battle with forces in the area. (Rahmat Gul/AP)

KABUL, Afghanistan — The military is investigating claims that a U.S. airstrike in southern Afghanistan killed dozens of civilians, including children and elderly people, officials said Wednesday.

Military officials in Kabul confirmed that U.S. aircraft conducted a strike in Helmand province’s Garmsir district on Tuesday as Afghan special forces and their U.S. advisers battled Taliban fighters. Officials were still trying on Wednesday to determine whether civilians were among the dead, a military statement said.

If proven, the deaths would add to a spike in civilian casualties caused by airstrikes. A rise in civilian deaths documented by the United Nations this year has corresponded with a surge in U.S. bombings.

Tuesday’s fatalities included children and the elderly, said Abdul Wadoud, a Helmand lawmaker. “Some of the bodies are unrecognizable,” he said in a phone interview.

The strike was carried out against an insurgent position after Afghan and U.S. ground troops came under heavy machine gun and rocket-propelled grenade fire from a compound in the area, the military said.

“At the time of the strike, the ground force was unaware of any civilians in or around the compound,” the military statement said. “They only knew that the Taliban was using the building as a fighting position.”

Militants had stockpiled ammunition in the area, which the military said could have caused civilian casualties.

Meanwhile, the Taliban on Wednesday claimed responsibility for an attack on the compound of security contractor G4S in Kabul, saying it was revenge for civilians killed in operations by Afghan and international forces, including in Helmand.

About a dozen people were injured in the attack, which included a car bomb explosion and gunfire, Afghan officials said Wednesday evening.

The Helmand operation killed at least 16 Taliban fighters, Attahullah Afghan, head of the provincial council, told The Associated Press. But most of the casualties were civilians, he said.

An Afghan investigation was underway, the AP reported, citing the provincial governor’s office.

Casualty figures in the embattled southern province are difficult to independently confirm and Afghan officials sometimes inflate the numbers of enemy fighters killed or wounded.

Helmand province has long been a Taliban stronghold and has been the bloodiest province for coalition forces during the 17-year war. Nearly 1,000 coalition troops — largely U.S. Marines and British soldiers — have died fighting there since 2001.

When the bulk of U.S. forces withdrew from the country in late 2014, the coalition handed over its sprawling base in Helmand to government forces. As the Taliban gained ground in the following years and after they nearly seized the provincial capital in 2016, U.S. soldiers deployed to bolster government forces.

Since early 2017, several hundred Marines have been training Afghan army and police forces as they work to recapture districts lost to the insurgents.

Late last year, after President Donald Trump announced plans for a reinvigorated strategy in Afghanistan, U.S. warplanes began striking drug labs and other targets in Helmand before expanding the operation to other provinces. Since then, there has been a sharp rise in airstrikes against Taliban insurgents, as well as the Islamic State and al-Qaida terrorist groups.

Airstrikes have caused more noncombatant deaths and injuries in the first nine months of 2018 than during any similar period since the U.N. began documenting them in 2009.

The U.N. attributed just over half of the airstrike casualties to international forces — namely the U.S., which is the only foreign country officially conducting strikes — while Afghan forces were blamed for 38 percent. Another 11 percent were undetermined.

Ground-based attacks by the Taliban and other militant groups have caused the majority of civilian deaths, according to U.N. reports.